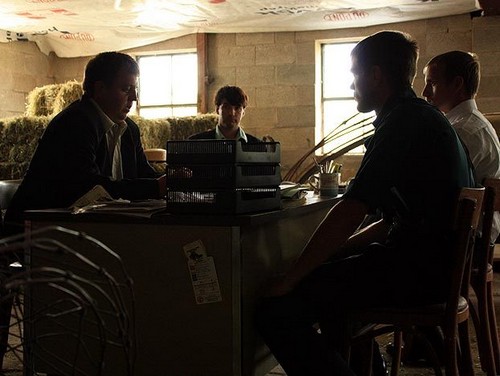 Tonight on the Discovery Channel AMISH MAFIA continues with a new episode called, “De Rott.”  Discovery’s new series Amish Mafia provides a first-ever look at the men who protect and maintain peace and order within the Amish community in Lancaster.

The 2006 School shootings in Lancaster County during which five young Amish girls were killed and five more seriously injured by a non-Amish milk truck driver brought to the nation’s attention the vulnerabilities of the Amish community, and their need for continued protection.

The show is about a side of Amish society that exists under the radar, and the Amish church denies the group’s existence. Amish Mafia provides eyewitness accounts of the incidents, misdeeds and wrongdoings within the Amish community, as well as a rare look at Levi and his team members who work together to maintain harmony. To protect participants and their family members, some identifying information and property have been changed. Some scenes have been re-enacted.

On tonight’s episode Changes are forced upon Levi; John feeds information to the police; and Merlin adds an ally.

Tonight’s episode is going to be filled with drama and you won’t want to miss it, so be sure to tune in for our live coverage of the show tonight at 9 PM EST! While you wait for our recap hit the comments and let us know what you think of “Amish Mafia” season 3.

Tonight’s episode opens with Merlin sharing with Andrew that his wife came to him and told him her husband was at Hooters. He is very upset that Andrew may be falling for English temptation and orders him to remember his duty to the Amish Church and to gain help from the Lord. Andrew agrees that he needs help and seems to be taking in Merlin’s lecturing.

Caleb is called to talk to Levi. He is very nervous and wonders who told about the party he and the others were at last night. Caleb tells the producer to stay in the car while he goes to talk to Levi. Alvin sits nearby. Levi yells at Caleb for putting them at risk because of his screw ups. He tells him he is going to send him to Indiana. Caleb tells the camera that the Amish community out there are more wild and unruly. They are known for having moonshine and wild parties. Caleb leaves knowing he must go to Indiana.

Jolin is hiding out watching two young guys enter the phone shanty and is suspicious when they take too long. He turns his mic off as he goes in and shortly after they are running out. Jolin confirms it is not green corn that they had after the producer inquired. Big Steve is searching for someone on behalf of Levi who owes some money. When he thinks he spots the guy, he tries to talk with him by speeding up next to him. The guy ignores Steve and he continues after him. Finally he stops and Big Steve pulls him out and begins hitting him and tells him that he “better not do that again, or I’ll have to…beat you up more.”

Caleb arrives in Indiana and meets up with Levi’s main contact there, Flip, who is a known bad-boy who constantly tests the limits. He is the party master who runs the show in Indiana. Meanwhile John is sent to see one of Levi’s construction sites. Esther made food for John. John offers his comments on the work and tells them it looks shabby.

Levi and Esther meet. Levi talks to Esther about getting married. She seems surprised. She knows it would be a wise move as it could put her family back in charge of Amish Aid.

A gun-toting Jolin is searching an abandoned truck and enters. He knows there is something going on in it. Once inside, he finds all types of chemicals. He shoots at it knowing it will explode. It goe sup in flames in one shot.

John is ratting out Levi and giving up all kinds of information. At night, on a side rode, he even shares where Levi will be in hopes of catching a break with his own legal problems.

Caleb and Flip are up to trouble and attempt to extract gas from cows. They use the gas to cause an explosion of a distillery they found. Ruck tries to justify his anger issues. Police pull Levi over. The officer warns Levi that they are going to be keeping a close eye on him and warn him to stay on the right track. Esther talks about Levi’s plans to talk to the Bishop about them marrying. She explains the Amish tradition of bundling. This is where the couple sleep together for many nights next to each other, but tightly wrapped in separate blankets, with a wood plank between them. This helps them to be close without sacrificing their honor. There is a place in Oho where they teach bundling. Esther goes to see Mary, a big, bad, bundling expert who actually runs a bundling business. Esther has a lot of questions as she looks around. She is told she has to make it to the location every night until she gets married. Esther explains they live far away, but she basically tells her that she has no choice. Esther sees a couple walking off together and asks what they are doing. Mary explains that they are going to the “soaking room,” which is where the man and woman basically have sex, though Mary tells Esther that the couple does not move. Therefore, it is not considered sex. Wow.

Wayne brings a woman to the Bishop who is interested in becoming Amish. The Bishop is suspicious and tells Wayne that he must take responsibility for Carrie and ensure she does not decide to leave or cause trouble for them after converting. Wayne agrees.

Levi leaves his car in exchange for the buggy he must take on his visit to the Bishop. After the meeting, Levi comes rushing out and takes off on his buggy as producers chase after him asking what happened. The meeting did not go well as Levi tells Alvin that the Bishop “thinks he has me by the balls.” Levi will likely find a way to get what he wants in the end.