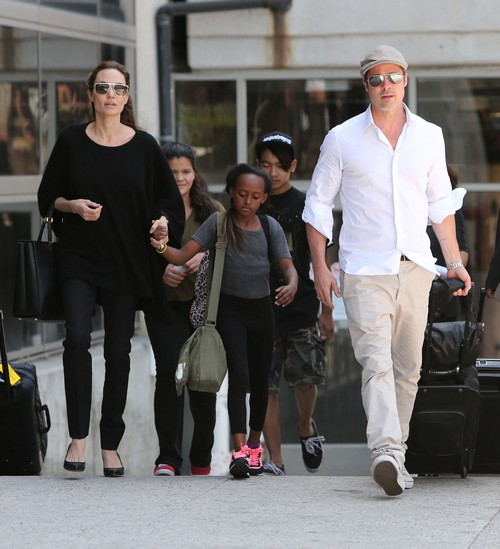 So apparently Brad Pitt has a psychic, and Angelina Jolie‘s not happy about it. A new tabloid report suggests that Brad is taking financial advice from this psychic, which is making Angelina furious. What, Brad and Angelina are the Tsar and Tsarina of Russia now? I’m sensing a Rasputin inspiration for this story, especially with the whole financial aspect.

For those who don’t know, Rasputin is blamed for leading the Tsarina into making horrible decisions during World War I, which eventually led to the fall of the Russian monarchy and the murder of the royal family. Obviously, Brad and Angelina are not even close to dealing with those kinds of stakes, but it’s interesting that the National Enquirer would suggest that Brad is seeing a psychic. Does he have anything to be worried about? He already has an Oscar, a whole army of children, a wonderful marriage, and a successful career.

However, psychic Ron Bard is reportedly advising Brad to change up his finances, according to the National Enquirer. But Angelina’s not happy about that, with a ‘source’ telling the Enquirer, “It seems like she likes to have some control over Brad’s purse strings, and she doesn’t want a psychic giving ‘financial advice’ to him. Ron doesn’t use any astrological charts for Brad (a Sagittarius) and thinks Angelina is a b*tch for how she dismisses his work.”

Ok, I don’t think either Angelina or Brad have ‘control’ over each other’s purse strings. Also, I really really doubt whether Brad would entrust his fortune and his children’s future on a psychic’s whims. The guy’s always been smarter than that, so let’s give some credit, right? He’s no imperial Tsarina of Russia, that’s for sure.