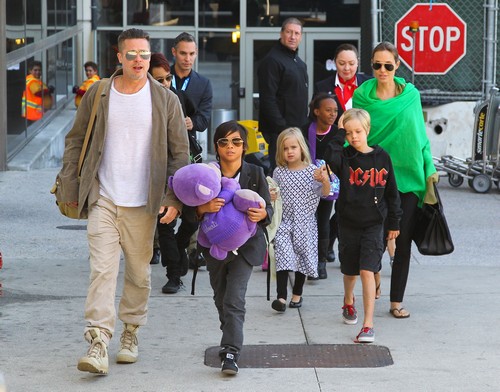 So this latest story comes from Fame/Flynet, a photo agency that has little reason to make this up. Apparently, Angelina Jolie is still determined to keep her distance from her father, Jon Voight, as their estrangement continues in earnest. According to the report, Jon met with Angelina’s bodyguard in a nearby LA parking lot to ‘offer up a homemade Valentine’s Day card and a bag of See’s candy to his estranged daughter and her family.’

Isn’t that kind of sad? Apparently, Angelina’s still refusing to let Jon meet her at home, and only agreed to the parking lot meeting as a last resort. It’s possible that Angelina could have already been en route to the BAFTAs by then, but sending her bodyguard in her place to meet her own father is still a bit… tragic.

Sure, Angelina and Jon have a lot of unresolved issues. But it really seems like Jon’s trying his best to put the past behind him, so shouldn’t Angelina let bygones be bygones? Granted, I don’t think any of us know the full details of exactly what went down between Angelina and her father, only that it was really ugly and led to a years-long estrangement. Their reunion a couple of years ago only seemed to be a result of Angelina’s desire to let her children meet their grandfather, at least once.

But clearly, even if they had temporarily resolved their differences, problems flared up once again. But you know what? Angelina isn’t perfect, so it’s kind of screwed up for her to blame her father for his past mistakes. Before Angelina adopted Maddox, I don’t think anyone would have called her a model citizen either. Of course, it’s a lot more difficult to forgive a family member for hurting you than to forgive yourself, but at this point, you’d kinda think that she’d let it go, no?

In what appears as a desperate and seemingly futile attempt to repair their damaged relationship, a grey and grizzled Jon Voight meets Angelina Jolie’s bodyguard in an LA parking lot to offer up a homemade Valentine’s Day card and a bag of See’s candy to his estranged daughter and her family on February 14, 2014. While the 74 year old actor has seen a boost in his career with an impressive turn in hit TV show ‘Ray Donovan,’ his real life seems to be mimicking his award-winning role role as a father struggling to overcome his past and make amends with his children. It appeared that Jolie refused to allow her father to visit her at her home and only agreed to send her bodygaurd to meet Voight in a nearby grocery store parking lot, where he offered up a peace offering of a Valentine’s Day card and candy. The oversized card was handmade and the words ‘Happy Valentine’s Day to my dear beautiful family! I love you! Grandpa Jon’ and ‘I love my Angie, I love you Maddox’ could be seen written on it along with messages.

Sorry that we can’t include the pics of Jon handing off his Valentine’s Day offerings to Angelina’s bodyguard due to copyright issues.