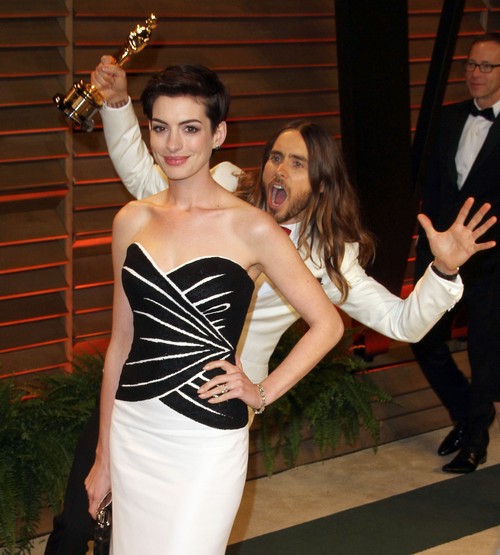 My guess is that it’s kind of tricky to be in a relationship with Angelina Jolie. She doesn’t exactly have the best track record for fidelity and likes to set her sights on technically unavailable men even when she is already linked to someone else. Angie and Brad Pitt have been together for nearly a decade but that doesn’t mean that she is likely to behave herself. This chick seems to look for excuses to misbehave and according to the March 31st print edition of National Enquirer she has set her sights on an old lover, Jared Leto.

Jared is having the time of his life fresh off his Best Supporting Oscar win and now of course everyone wants to work with him, including Angie. The two first met back in 1999 and worked together on Alexander in 2004. According to sources Angie was head over heels in love with Jared when the two had a brief fling. National Enquirer claims, “Angelina and Jared first met while making the 1999 movie ‘Girl, Interrupted,’ which earned Angelina a best supporting actress Oscar. She later fell hard for him on the set of ‘Alexander.'”

At the time he wasn’t interested in anything serious which left her crushed. Angie actually rebounded from Jared with the then-married Brad!

Imagine Brad’s anger when he found out that Angie set up a secret meeting with Jared recently to discuss possibly working together in the future. Brad knows that when Angie says meeting what it really means is that anything goes and he fumed at the thought of her hooking up with Jared again. Do you think that anything happened between Angie and Jared recently or was this meeting truly about real business? Tell us your thoughts in the comments below!