Angelina Jolie Dishes On Maleficent, Admits She Doesn’t Want Her Children To Be Actors! (PHOTO) 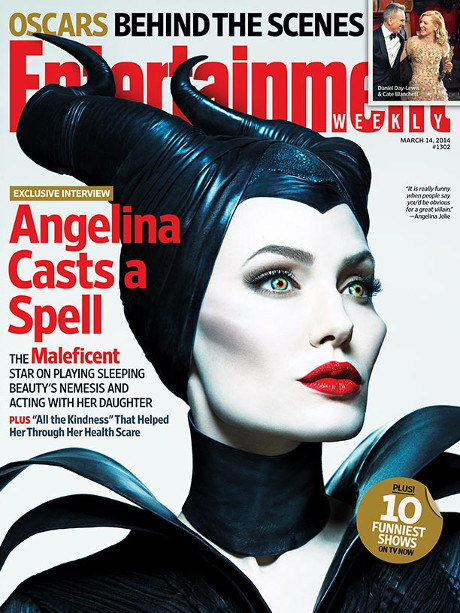 Angelina Jolie terrifies and stuns as Maleficent in the upcoming movie of the same name and, when talking about her daughter Vivienne‘s brief appearance in the film as a Young Aurora, she admits she and Brad Pitt aren’t trying to force their children into the industry anytime soon.

The actress opened up to a recent issue of Entertainment Weekly, saying, “We think it’s fun for our kids to have cameos and join us on set, but not to be actors. That’s not our goal for Brad [Pitt] and I at all. But the other 3- and 4-year-old [performers] wouldn’t come near me. It had to be a child that liked me and wasn’t afraid of my horns and my eyes and my claws. So it had to be Viv.”

Her children were initially opposed to her performing in this movie and donning the characteristic horns of Maleficent, a villain who embodies darkness. They didn’t want her playing such a scary character but, after some conversation, Angelina discussed it with her children, telling them that she has a story worth telling — and eventually told them, “’Let me tell you the real story but you can’t tell anybody.’”

We can’t wait for Angelina Jolie to tell us the real story of Maleficent and how this fallen fairy was poisoned with evil. Maleficent opens in theaters on May 30!