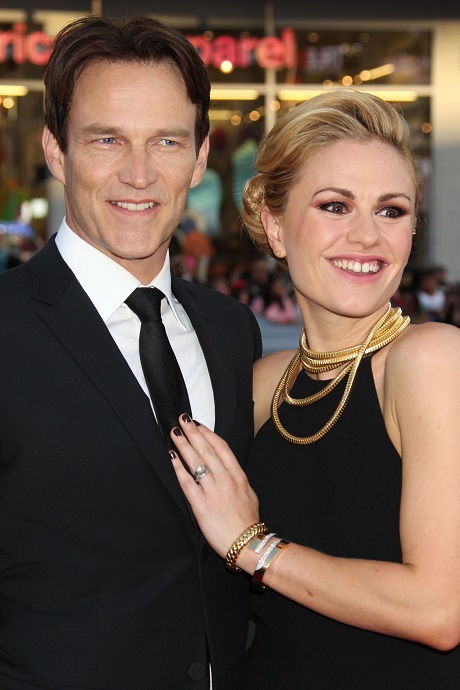 Usually celebs aim to be on their very best behavior while at any event connected to work. When True Blood premiered in L.A. Last week, Anna Paquin walked the red carpet beside her husband, Stephen Moyer, and she was a total class act. The two were gracious and charming and carried themselves well heading into the event. Unfortunately, a few hours later, at the after party, Anna completely unraveled.

According to the July 7th print edition of Star Magazine, in less than two hours, Anna went from absolutely fine to a hot mess. She was slurring her words and sloppy drunk and apparently Stephen was overheard scolding his wife for daring to get wasted on such a big night. He even told the mother of his 21-month-old twins that she needs help. Sources say that, from hearing Stephen’s words, it was pretty obvious that drinking too much happens fairly often — especially if he was telling his wife that she needs help.

Anna and Stephen have always had a pretty united front when it comes to dealing with the press. Do you think that the stress of a high profile job plus toddler twins is a bit more than Anna can handle and that’s why she has been hitting the bottle? Or do you think that this was just the worst evening possible to get sloppy and it pissed Stephen off to the point of him exaggerating her behavior?

Maybe she was drunk so quickly because she’s a lightweight who rarely drinks. What do you think the real situation is with Anna? Is this a sign of trouble in their marriage or was it just one particularly bad night? Tell us your thoughts in the comments section below!