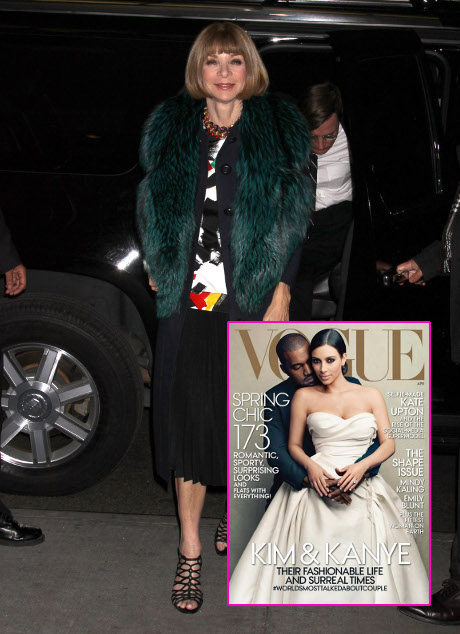 If your eyes are not yet bleeding from looking at the April cover of Vogue Magazine featuring Kim Kardashian and Kanye West, then lucky you. Anna Wintour has not only given in to Kanye’s incessant begging (we know it was this or Anna must have owed him a big favor), but she has actually allowed words to come out of her mouth that are so asinine they’re almost painful to read. First, let’s start with the cover. It reads, “Kim & Kanye, Their Fashionable Life and Surreal Times,” with hashtag #WORLDSMOSTTALKEDABOUTCOUPLE.” We can understand “most talked about,” but perhaps it should have read “#WORLDSMOSTTALKEDABOUTCOUPLE-ANDNOTINAGOODWAY.”

And Fashionable life?? Wait…are they actually talking about the SAME Kim that sells her trashy line on the racks of Sears? The one who cannot seem to get a piece of clothing that isn’t too long on her arms and too tight everywhere else? And Kanye? Because he pushes the envelope, that makes him the other half of the “fashionable” couple?

Anna must have had something put in her cocktail upon making her decision to allow them on the cover and when praising Kim. She actually says that K & K “define the culture!” Which culture she is talking about, I am not sure. Perhaps somewhere there is a culture of desperate, angry, ignorant, self-absorbed people running around with trashy, tight clothes who are not able to spell simple words correctly. Kim tweeted about her cover, exclaiming, “I can’t breath!” Yes, and you cannot spell, either.

If the cover was not nauseating enough for you, here’s what the obviously drugged Anna Wintour said about the couple in the mag, “Part of the pleasure of editing Vogue, one that lies in a long tradition of this magazine, is being able to feature those who define the culture at any given moment, who stir things up, whose presence in the world shapes the way it looks and influences the way we see it. I think we can all agree on the fact that that role is currently being played by Kim and Kanye to a T. (Or perhaps that should be to a K?)”

She then goes on to provide a heartwarming disclaimer that she was not “begged” by Kanye for the cover but that it was all her idea. Yes, she really did say that. If that was not bad enough, she goes on, “There’s barely a strand of the modern media that the Kardashian Wests haven’t been able to master, and for good reason: Kanye is an amazing performer and cultural provocateur, while Kim, through her strength of character, has created a place for herself in the glare of the world’s spotlight, and it takes real guts to do that.”

Strength of character? A flea has more character than Kim! Does Anna realize that her “favor” has already cost her several subscriptions and many, many angry Vogue readers? Likely knowing how much they are hated, K & K included daughter North in the photo shoot since she’s the only one of the three people may not completely hate. Kim and Kanye pretend to be parents in the pics. Kim was actually able to have her phone pried out of her hands long enough to hold her daughter before she began shaking and going through selfie-withdrawals.

Vogue fans are outraged and many have already commented that they plan to boycott the magazine, while others have already cancelled subscriptions labeling Anna a sell-out. I don’t blame them. It’s hysterical that these two would make the cover of the famed magazine. Maybe overzealous Vogue readers can do the typical Kanye boycott (remember his boycott of LV when the CEO didn’t meet with him?) and turn the tables on him for once, inciting their own boycott, this time against the magazine that placed Kanye and his trashy fiancé on the cover. We already KNOW what you think CDLers, but weigh in anyway…because we want to hear it!