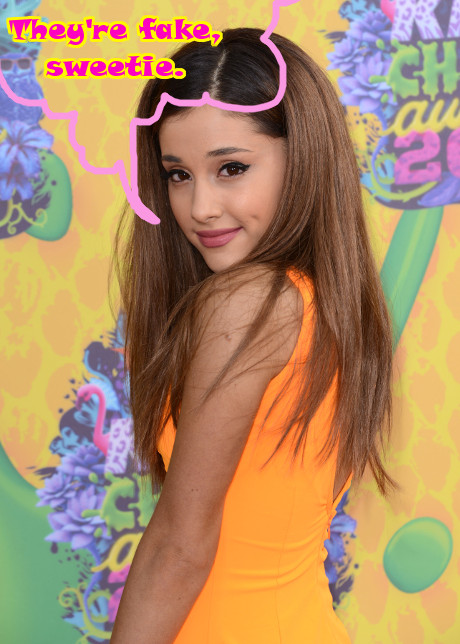 Ariana Grande‘s supposed nude photos began trending on Twitter recently. But, don’t worry, folks, Ariana hasn’t turned all scandalous on us. The pics are reportedly fakes, and the hashtag (#ArianasNudesLeaked) that began on Twitter was apparently meant to be nothing more than an April Fools’ Day joke. Not that funny and not that original, in our opinion. Plus, the whole fake release was a day early. I mean, honestly, if you’re going to go to great lengths to unleash an April Fools’ Day joke at least make sure it lands on the correct day!

Countless fans began linking to fake, clearly photoshopped pics of the singer, and some even made sure to state that it was all just an elaborate joke. Grande has yet to comment on the photos and chances are she won’t. Things like this can get to be quite petty and if everyone knows she’s not the subject of the picture, why belabor a stupid prank and give it any more attention than it’s worth?

Ironically, Jenette McCurdy, Ariana’s costar on the popular kids’ show Sam & Cat, actually did have nude pics surface online earlier this month. Hers, unfortunately for her, were quite real.

What do you think of this “joke?” Do you think it’s funny or just dumb, stupid, and childish? Leave us your thoughts in the comments section below. We’d love to hear from you!