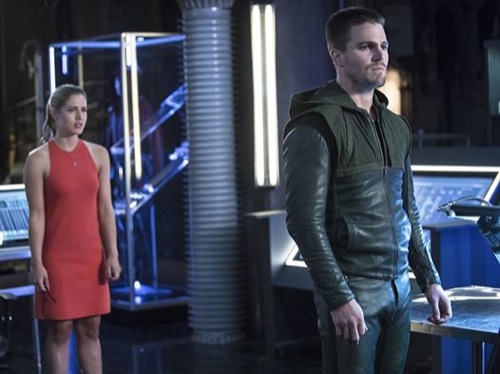 Tonight on the CW ARROW returns with an all new Wednesday, October 15, season 3 episode 2 called “Sara.” Tonight, a mysterious archer known as Komodo appears in town and begins skewering businessmen. Meanwhile, Oliver [Stephen Amell] worries about Thea, which forces Roy to tell him the truth about why she left town; and Ray Palmer pursues Felicity. In a flashback, Oliver is assigned his first kill and the target is his best friend, Tommy.

On the last episode, with crime in Starling City at an all-time low thanks to the Arrow (Stephen Amell) and his team, Oliver thought he could finally balance being both the Arrow and Oliver Queen and asked Felicity (Emily Bett Rickards) out on a date. However, when a new villain (guest star Peter Stormare) emerged, who had claimed the name Vertigo from the recently deceased Count, Oliver was caught off-guard and someone close to him was hurt. Oliver and a newly suited up Roy (Colton Haynes) took on the Count. Meanwhile, Diggle (David Ramsey) beame a father, Lance (Paul Blackthorne) was promoted to Captain, Laurel (Katie Cassidy) joined Arrow’s inner circle and Felicity got a part-time job at a tech store to make ends meet. Also, Oliver fought to regain his company. Did you watch the last episode? If you missed it, we have a full and detailed recap right here for you.

On tonight’s episode, Lance (Paul Blackthorne) calls the Arrow (Stephen Amell) when another archer appears in town and starts skewering businessmen. Diggle (David Ramsey) uses A.R.G.U.S. to find the archer’s identity; he is a man named Simon Lacroix (guest star Matt Ward), who goes by the codename Komodo. However, the team hits a rough patch with the mission and gets help from a surprising source – Laurel (Katie Cassidy). Meanwhile, Oliver begins to worry that he hasn’t heard from Thea (Willa Holland), which forces Roy (Colton Haynes) to tell him the truth about why she left town. Ray Palmer (Brandon Routh) pursues Felicity (Emily Bett Rickards). In the flashback, Maseo (guest star Karl Yune) tells Oliver that Amanda Waller has ordered his first kill. As Oliver looks down the scope of the rifle, he sees the target is his best friend, Tommy (guest star Colin Donnell). Despite her promise to her sister, Laurel debates sharing a secret about Sara (Caity Lotz) with Lance.

On tonight’s episode of Arrow, Sara’s death has come as a shock to everyone. Especially to her sister, Laurel. Laurel and her father just got Sarah back so this unexplained murder made her feel like she was cheated.

And so Laurel didn’t want to notify her father about Sarah. The first person she told was Oliver. She had dragged her sister’s body back to Oliver’s lair and she did this in order for him to see what this mysterious archer did to Sara. Laurel wants revenge and frankly Oliver is the only person she knows she can turn to that would help.

Vengeance is Oliver’s forte after all and yet he tried to Laurel out of doing anything he considers rash. He doesn’t want her to get hurt. And it’s way too late for that. She wants to get the man that killed her sister. So if Oliver doesn’t want to assist – Laurel will most likely hunt this archer on her own.

Oliver is going to have to go after the archer and it will probably be best if he lets Laurel in on the plan. It’s not like anyone else on Team Arrow wants to sit this particular fight out. Even, Diggle, when he found out about Sara, wanted in on the manhunt.

It’s all hand on deck and that includes Lance who’s still very much in the dark about certain things. The same archer that killed his daughter has also been attacking crooks in the city. So to get justice for them, he approached the Arrow for help. And because Oliver didn’t want to be the one to break the news – he didn’t tell Lance about Sara.

Later Diggle used his girlfriend’s top secret government access to identify their archer. Oliver had only known a handful of capable archers and dismissed most of them seeing as they were in the League of Shadows along with Sara. And the league doesn’t kill their own. Hence, only the unknowns were left and thankfully Diggle was able to clear up the matter in no time.
He found out this other archer’s name is Simon Lacroix but he goes by Komodo.

Incidentally, Komodo had left a witness to one of his assaults alive. However Oliver didn’t get much at the witness. Komodo appears to be very skilled and the witness could only say that the other guy was wearing a mask. As for Komodo’s appearance, Oliver eventually got close enough to him to see for himself that the guy is essentially dressed like Oliver. Whereas Oliver prefers the color green, Komodo prefers red.

At least with his bike gear (a good thing too, Red is Roy’s color)!

Komodo was able to lose Oliver during a chase. Yet Laurel, who was brought up to date and was by Felicity’s side during Oliver’s confrontation with the Komodo (thereby seeing Oliver’s failure), wanted to feel like she could do something. So she went after the one person the Komodo had failed to kill.

Laurel knew there was a connection between all of the Komodo’s targets and thus nearly broke a “victim’s” arm just to get information out of him. And the survivor talked. Injury had made him compliant. He told her that he was currently in a secret deal that involved the other two known Komodo hits.

But that’s as far as he got before the Komodo came after him a second time. And on his second attempt, the Komodo made sure not to miss.

While the Komodo’s actions are troubling, there’s another problem Oliver has to deal with. His sister has worrisomely gone MIA. Roy had hid the truth from everyone. He hadn’t said a word about Thea running away and now that he’s finally come clean – Oliver can’t even start looking for her right away. He has to finish what he started with the Komodo.

Felicity has noticed that Oliver hasn’t taken time to grieve for Sara properly and she confronted him on it. Though he told her that as part of this job – he knew there was risk involved and that he shouldn’t get too attached. It was a self-defense mechanism. Just a way to protect himself but Felicity told him she didn’t ever want to end up like that. She ultimately wants a life outside of the basement one day. Even if her future means Oliver won’t be in it.

Ray Palmer has been actively pursuing Felicity since they met and it’s only recently (after her talk with Oliver) she’s decided to accept Ray’s offer.

Funnily, it was at Ray’s benefit party that Komodo made his final strike. He was hired to stop a deal for oil and that meant killing everyone involved. And one of them happened to be at the party.

Oliver and Roy stopped Komodo from killing his last target. And later Oliver had Komodo pinned so to speak when Laurel crashed onto the scene. She didn’t trust Oliver to kill the guy that took her sister away. So she waited until Oliver had disarmed the Komodo before pulling out her gun.

Laurel wanted to kill him and if Oliver hadn’t taken earlier precautions of removing the bullets from the gun – she would have killed an innocent man. The Komodo didn’t kill her sister. He was out of town killing other people at the time. So there’s a third archer running around!

When the time came, Laurel didn’t have the nerve to tell her father. She merely kept Sara’s death quiet and had her re-buried in her old plot from before.

Team Arrow was on hand to help her grieve. And Diggle revealed that they’re naming the baby Sara in honor of their good friend.
Oliver isn’t going to give up looking for Sara’s killer but with no lead, he decided to switch focus onto Thea. She’s been bonding with her biological father and that’s not good. Oliver almost took one child away from that Malcolm Merlyn. Yet when the time he couldn’t kill Tommy in spite of it being an official order from Amanda. Apparently she used for a bunch a things back in Hong Kong and in the end Oliver couldn’t hurt a friend. So he chose not to.

He let Tommy return to his father. But Thea is different and he’s not going to allow anyone to use her!