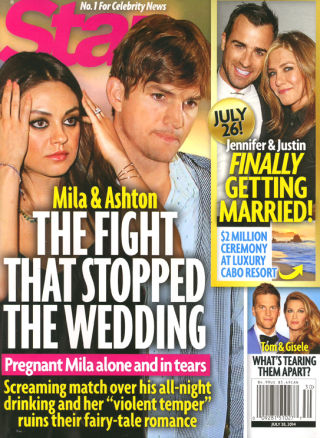 The latest edition of Star Magazine is about to hit stands, and this week’s cover is graced by super couple Ashton Kutcher and his pregnant fiancée Mila Kunis. And, according to the tabloid, the super couple may not be a couple anymore. On the cover, Star says, “Mila and Ashton, the fight that stopped the wedding. Pregnant Mila alone and in tears. Screaming match over his all-night drinking and her violent temper ruins their fairy-tale romance.”

Ashton and Mila seemed to be nauseatingly happy after it was revealed they were expecting their first child together and planning a wedding. So, what happened? The World Cup, apparently. Ashton Kutcher is a die-hard soccer fan, and he wasn’t letting his pregnant fiancée come between him and the game in Brazil. The magazine claims that Mila was furious when she realized Ashton was planning on leaving her at home and flying to Brazil to watch soccer.

Star’s insider explains, “She told him that he’d better sell his World Cup tickets, because there was no way she was allowing him to go. He couldn’t believe she would tell him that he couldn’t go to an iconic event that only happens once every four years! So Ashton told Mila he was tired of her controlling his every move.”

So, are Mila and Ashton really on the outs? Mila Kunis’ pregnant and emotional state might be causing her to pick fights with Kutcher over petty things like soccer games — but that doesn’t mean he should desert his lady! Kutcher was reportedly spotted at the World Cup, so there is a good chance they may have, in fact, been arguing over the tickets. But, the odds of Ashton and Mila going their separate ways over a soccer game are pretty slim. After all, their relationship has endured; it’s probably going to take a little more than soccer game tickets to make them part ways.