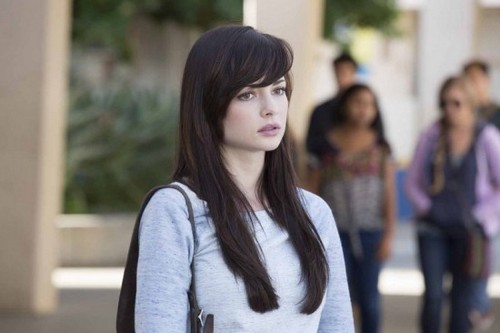 Tonight on MTV their comedy series AWKWARD about an under-the-radar teen continues with an all new Tuesday November 4, season 4 episode 18 called, “Girls Rule.” On tonight’s Jenna is pitted against Matty’s new girlfriend; Sadie and Tamara battle for cheerleading dominance.

On the last episode, after the battle of the sexes, the Valentine’s Day prospects were dim. Did you watch the last episode? If you missed it, we have a full and detailed recap right here for you.

On tonight’s episode Jenna is at odds with Matty’s girlfriend on his 18th birthday; Sadie and Tamara battle.

Lacey is chugging coffee when Jenna comes out watching for the mail. They are both waiting on her college approvals. Lacey says she’s waiting on a gift for her dad and that reminds Jenna she needs to get a gift for Matty. He’s 18 and she hands him a cupcake with a candle. Gabby has a group of cheerleaders to sing to him and a cupcake carousel Gabby made. She also gives him Laker’s tickets and Jenna’s pathetic vending machine cupcake hits the dirt.

Sadie takes over cheerleading practice and Tamara tells her she’s not in charge. That devolves into a brawl and then they land in Val’s office who tells him this is not cool behavior for seniors and tells them they have to work together. Jake drags Matty into a dark place and pulls off the jock. They are in a strip club and Jake says it’s 18 and over. They hit the hot food buffet and are thrilled.

Tamara complains to Jenna that she’s got to work with Sadie. Jenna tells her about Gabby’s surprise party for Matty and Tamara says she threw down the gauntlet and Jenna has to go. She says it’s chick chicken and if she doesn’t go, Gabby wins by intimidation. Jenna says this means she has to accept. Jenna comes over and tells her that her plans fell through so she’s coming. Gabby says the more the merrier.

Gabby asks her to stop by Matty’s house after school to help her set up for the party so they can really get to know each other. Jenna is stunned. Jenna shows up to Matty’s after school to help. She psychs herself up to deal with Gabby. She rings the bell and finds all of Gabby’s friends there too. The guys say they would be in math class right now but instead they are watching strippers.

They talk about all things they can do at 18 – things that can kill you – smoke, join the Army and vote. Matty says he can also find out about his birth parents. A pastor is there too watching the half nekked girls and sends the boys over drinks for Matty’s birthday. Gabby talks sound for the party and suggest Bruno Mars. Jenna knows that’s not his groove but one of the girls says Gabby should do what she likes since she’s the GF.

She then caves and tells Gabby that Matty hates hummus. Gabby tells her friend to take it away and thanks her. Then the other girl says Jake was supposed to have him there by 6:30 but he texted that they are wasted and Gabby starts to panic. Jenna says she’ll text Tamara to pick them up and will go by her house and lift a bottle of the tequila he likes from her parents. She thanks Jenna sincerely.

At practice, Sadie hates on Tamara’s cheer and says it’s not mean enough. Sadie says she’s a bulldog and Tamara is a chihuahua. Tamara gets a text to pick the guys up at a strip club and says she can’t go alone. She asks the bulldog to come alone. Jenna gets a big envelope from Lockard U and thinks since it’s a big envelope, she’s definitely in.

The bouncer won’t let the girls into the club. Instead, they sneak into the dancer entrance. The house mother checks them in and then pushes them onto the stage and says they’re next. The guys cheer on the girls and drink and then Sadie and Tamara come out. All the men cheer and the pastor throws money at them. Matty and Jake laugh wildly and the two start to do a cheer.

Sadie crawls over to Jake and says they’re coming with them. She tells Matty about his surprise party and they grab up their stuff to go. Jenna tells Gabby that Tamara texted and they’ll be there any moment. Gabby tells everyone to hide and she hides near Jenna. She thanks her for her help with the party and tells Jenna she’s creative and that she’s boring but Jenna says she’s not.

Gabby tells her that Matty respects her and that she genuinely likes her. Jenna says she was wrong about her and they all wish a drunk Matty happy B-day. He opens his presents and then goes through the mail. He sees a small envelope and pockets it. Jenna tells her she got into Lockard and Gabby congratulates her. Then Sadie and Tamara do a cheer and Jenna asks if they’re friends.

Jenna says the party is great and was all Gabby. She is happy that she and Gabby are friends now and tells them she has to take off. Gabby thanks her again and Jenna says – any time – and leaves. Jenna shows her mom the envelope and she says she’s proud. Lacey says she didn’t know how she would react and shows Jenna the letter. Turns out her mom applied to college and got in.

She asks if she got an envelope and Jenna is mad that it’s the small envelope – the one that always carries bad news. Jenna lies in bed with candy wrappers and her rejection letter around her. Her mom sits outside her door and asks her to forgive her. Jenna tells her to leave her alone and says she’s tired of her mom overstepping boundaries.

Matty knocks on her bedroom door and says he needs a drinking partner. He asks what’s wrong and she tells him Lockhard rejected her but accepted her mom. He says she needs a drink and hands her the bottle of tequila. They chug and she eats chocolate then says the two together are not cool. She tells him that Gabby is awesome and easy breezy.

Jenna says the only reason he liked her sophomore year was because she’d have sex with him. She says he dates Gabby out in the open and is waiting for her but that wasn’t what he was to her. Matty says he came to thank her because he knows she helped Gabby with the party but didn’t take any credit. He tells her he got the envelope with his parents’ birth names.

He opens it and reads that his mother does not want to be contacted but his father’s name is there and he’s in Portland, Oregon. He thanks her for being there with him when he opened it. He kisses her and they fall back onto the bed. She stops him and says they can’t do this. She says the rules say you can’t make out with your friend’s BF and Gabby is a really cool girl. He agrees.