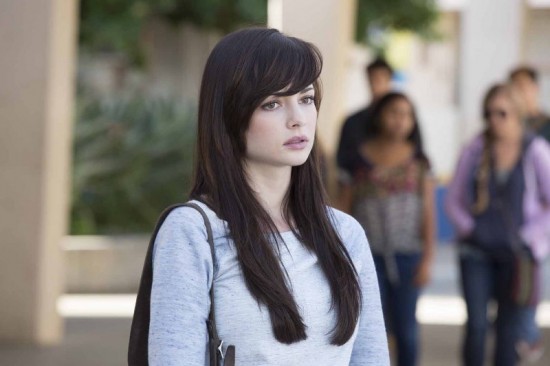 On the last episode, the battle of the sexes erupted again; Tamara and Jenna’s “Dude Database” went viral. Did you watch the last episode? If you missed it, we have a full and detailed recap right here for you.

On tonight’s episode after the battle of the sexes, the Valentine’s Day prospects are dim.

Be sure to tune in for AWKWARD on MTV at 10 PM EST and check here for a live recap of all of Jenna’s angst and Tamara’s freak outs. Hit up the comments to tell us what you think of the episode and what you think will happen with Jenna, Matty, Tamara, Jake, Sadie and all the others in Season 4. While you wait for the recap, check out a sneak peek of tonight’s episode below!

Jenna is hated by everyone because all the guys in school are holding out because they’re still mad about being rated by the girls. Tamara says the Great Repression has ruined Valentine’s Day. Jenna reminds her that she was in on it too. Jenna opens her locker and a pile of blue balls falls out of her locker. Some guys says she gave them blue balls so they’re giving them back. A girl comes up and dumps a slushee on her head.

Val wonders what Will has planned for V-Day and tells Lissa her BF started out as her stalker. She then tells Lissa that she just found out her sister was really her mom. Lissa says her mom sent her BF/brother to another family and her dad is in gay rehab. She says this is making her not trust God’s plan. Jenna learns about the New Deal ending the Great Depression and that inspires her to find a solution. She makes a call and barters for something for $200. She’s booked a party bus.

Matty hassles Jenna about the blue balls and she says she rented a party bus and reminds them about the Julies and their double decker. Jenna says the driver looks the other way. Matty agrees to ride it. Val goes to chat with Will about V-Day plans and he says he’s out of town to go diving this weekend. Val asks why he’s going and he says he needs R&R. She tries to drop a hint but he’s clueless and goes.

Tamara has booze for the bus and then Sadie and Sergio pull up. She’s mad that he’s working and says she hopes he chokes on a chalupa. Lissa is there and says Sadie can be her date. Sadie says that’s just sad. Matty pulls up and gets out looking good. Jenna does a lady swoon until she sees he’s got Gabby with her. The turn out is pretty lame so far. They all wonder where the bus is.

Tamara tells her to focus on ending the drought not on exes. Jake rolls up and Tamra obsesses a little. The party bus rolls up and Theo says it’s a stripper’s meth lab. The dude rolls out and asks for the Benjamins up front. They all load up in the depressing looking bus. Sadie asks if something died in here and the driver says someone did last week but he febreezed. Jenna grabs the stripper pole which comes loose from its mooring. It’s just sad.

Tamara asks who he banged and he won’t give. Gabby says never has she ever scored triple digits in mini golf and Matty has to drink. Jenna is annoyed with Gabby and Matty’s flirting. Jenna says never has she ever taken someone’s virginity. She forces Matty to drink then she does and he wants to know whose V card she swiped. She says it wasn’t Luke and then the party bus comes to a slamming halt.

Val complains to Ally and Lacey that once she let the stalker in, the romance died. They are at the school to chaperone the dance and Ally has a drink sack in her cleavage and offers Val a chance to suck on it but she says she’s on duty. The bus puts the kids out at the school and Lissa sees some candy and pops it in her mouth – she wonders why the candy heart says Molly. Jenna sees a condom fell on the floor and asks what guy was breaking the sex ban tonight and Matty has to admit it’s his.

Gabby stomps out and Matty follows in shame. The others pile out. Theo and Cole wonder where their party favors of and realize the vestal virgin Lissa took the pill. They are intrigued. Val decides to drink from Ally’s booze boobs and then they realize they are late to the party. Jenna says they need to get the booze off the bus. Turns out the bus driver guzzled it all and everyone gangs up on Jenna for sucking.

Matty asks Jenna what she was pulling with the game in front of Gabby and says she’s getting aggro. He tells her thanks to her game, Gabby left and he’s alone. Lacey says she remembers getting kicked out of a dance when Kevin went down on her and Ally says that’s romantic. She lights up and Val says it’s not cool but then pushes her under the fire alarm to keep smoking.

Sadie tells Val that Sergio bailed on her to work and Val says they can hang but then Sergio shows up and Sadie says she has to be a spinster alone. Val says she’s the biggest loser here but Will is there. He says he wanted to kick it old school so he’s been stalking her ass all night. They smooch. Jake works on Tamara and she’s just meh but then then he finally hits the right spot and makes her moan. The sprinklers turn on thanks to Ally and everyone breaks into wet smooches. Looks like the nookie drought is over for everyone except Jenna.

At school, Jenna is happy that everyone is back to just hating her like normal. Sadie tells her she ruined Lissa’s life who is suspended for two weeks because of her molly. Tamara asks if she’s seen Jake. Jenna asks her not to go over since Matty is mad and Tamara says he’s in the right because she wronged him. Jenna apologizes to Matty and he says he was being dickish too. He says Gabby isn’t mad and just wants to take things slow.

He says she’s a virgin and he respects that. He says some things are worth waiting for. He goes over to Gabby. Jenna is mad because she realizes Matty thinks Gabby is worth waiting for but he clearly didn’t feel that way about her.