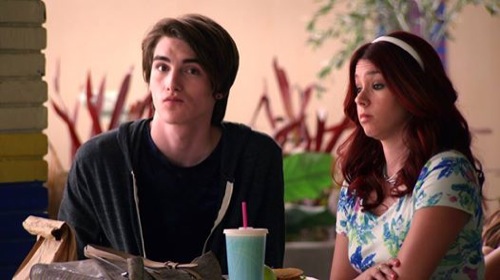 Tonight on MTV their comedy series AWKWARD about an under-the-radar teen continues with an all new Tuesday October 21, season 4 episode 16 called, “Hashtag Drama.” On tonight’s a secret is revealed, causing friction between Jenna and Tamara.

If you have never watched the show before “Awkward” is about the specific incidents in our formative years that define us -sometimes for the best and sometimes for the worst. The show centers around fifteen-year-old Jenna Hamilton, who, like many, feels invisible to her peers and desperately wants to find her place–which is hard to do in a day and age where fitting in means standing out.

On the last episode, things got crazy at the senior bonfire; Jenna and Tamara announced the boys’ girl-rating tradition. Did you watch the last episode? If you missed it, we have a full and detailed recap right here for you.

Jenna is pleased that she let Owen down easy and made up with Matty after the bonfire, her slate was clear. She hands Tamara a coffee and she asks if she’s gone Amish since she hasn’t answered her calls. Tamara says the dude database has gone viral. Hashtags about the guys are pouring in and we see there is drama all over the school quad.

Jake is furious he’s been labeled a puppy dog and the gay guys wonder why the straight guys are being so sensitive since gay bar judgment is so harsh. Matty comes up and is harassed by girls who want to check him out. He was hashtagged with FabAbs. Two girls roll by and they think the database came from some freshman.

Valeria calls Jenna to the office and is worried she’s busted. She asks her about the database and wonders if any faculty is involved. The two and a half inch kid comes in and says he needs guidance and Jenna goes. Matty tells Jake the hashtag thing sucks and says Matty has it good because he’s highly rated. Gabby asks Matty how many of these girls he took on an actual date.

He asks to take her to mini golf and she says he’ll try to sink a hole in one but he says it’s a double date. He then goes to Sadie to ask her to go along and she says he has to pay for she and Sergio both. Lissa approaches Theo and Cole to ask for advice. She says she wants to be in heaven with her family but says now her dad can’t go.

They tell her she’s got bad info and says he’s going to gay heaven which is more like a party while Lissa will be in straight heaven. She says there are too many heavens to keep straight and flounces off. Jenna’s phone is pinging off the hook when Owen comes up and he thanks her for putting him on the dude database. He kisses her cheek and leaves.

Tamara asks if they’re in the friend zone. She tells her that she had hooked up with Owen once at New Year’s and then once again and says it was weird because she took his v card but then Tamara tells her she’s the one who hashtagged Owen after they hooked up. She stalks off. Jenna follows and tells her this is not a walk-away moment then does it again.

Jenna says she didn’t know she liked him and Tamara says she didn’t know she liked him. Jenna says he’s not her type but Tamara gets mad and says he’s good enough for her but not Owen. He’s outraged. Jenna goes to confront him about hooking up with Tamara. He reminds her that she told him to go after someone awesome and she’s awesome. She tells him to stay away from Tamara.

Val fire hoses the rowdy crowd still upset about the dude database. Lissa rants to Sadie about all the heavens. Sadie tells her that everyone goes to heaven and there’s no gay issue. She tells her to believe in happiness. Sadie gets a text from Sergio that his car died and says she’s going to take her booze bag step-mom’s car to pick him up. Her step-mom reminds her she’s right there and Sadie says she knows.

Jenna goes to her mom for advice. Lacey totally gets while Tamara is mad and says she pretty much gave her bestie her leftovers. Her mom says she should have told Tamara just enough of the truth that she can avoid being hurt. Sadie, Sergio, Gabby and Matty are at mini-golf and it’s getting crazy competitive.

Sergio is up next and Sadie says if he misses she’ll rip off his junk and he says that only hurts her. Matty stinks and asks Gabby if he sinks the putt if she’ll kiss him. She asks him if a hook-up is on the line he can suddenly step up his game. She says he’s been playing her and walks away. Jenna shows up to apologize to Tamara and starts babbling. Owen is standing behind her and hears all this.

Owen is over at Tamara’s and she’s mad at Jenna because he came to tell her what Jenna says. Tamara tells Jenna it’s not about Owen but about the two of them. She thinks Jenna thinks she’s basically hotter and kicks her out so she and Owen can have their juice he had gone to get. She shuts the door firmly in Jenna’s face.

Sergio and Sadie drop Matty and Gabby off after they heckle him. Matty says they’re too competitive and Gabby says that’s what got her a full ride to Stanford. She says he’s trying way too hard to convince her that he’s a good guy. He tells her to get to know him instead of believing the rumors and stupid hashtags. She steps in and kisses him on the cheek.

Jake slams down by Jenna and is playing bad boy. Val breaks in on the speaker and says to come down to find out how to stop being awful. They show up and she says she knows they hate themselves sometimes and says she hates them too. She tells them to let it. Sadie says she’s a fake teacher and should be fired again or thrown in jail.

Sadie says that felt great. Val is hurt. Theo stands up and says he hates it that all these most basic bitches can’t get their shit out without infantile bonding and says they need to grow a pair. Lissa says she hates it that God is an asshole. The gay guys come to bond over it. One guy says he hates that gummy worms won’t tell their secrets. Jake says he doesn’t hate anything because he’s a nice guy.

The besties are atoned then try to add positive hashtag to the dude database. They call Kyle and emo stud and see how happy he is. Tamara calls Owen over and he’s scared. Jenna says they’re sorry for the drama and he says since he banged two senior girls in two weeks he’s a legend. Jenna deletes the database and that lets everyone see she was the administrator of the account. Everyone gets the message and glares roll her way galore.