BY Stormy Elizabeth on May 13, 2014 | Comments: one comment
Related : Reality TV, Recap 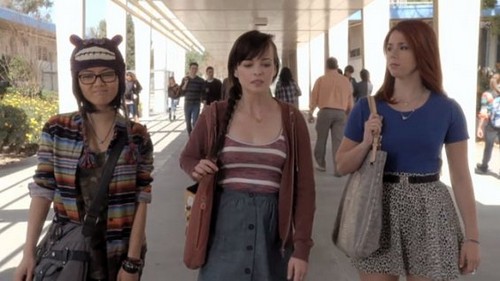 Tonight on MTV their comedy series AWKWARD about an under-the-radar teen airs with a new episode called, “Overnight.” On tonight’s episode, “Overnight,” Enna and Tamara go on an overnight college visit. Meanwhile, new rivalries and romances emerge at a party.

Last time on Awkward, Sophomore Sluts, the seniors stressed that they wouldn’t win Spirit Week for the first time ever and not one, but two younger girls were all over Matty making Jenna jealous and bringing her insecurities to the surface. What happened when the seniors have to turn up the heat to win Spirit Week? Was Tamara able to hold it together? Did Jenna get more of Matty or are they done for good?  Did you watch lat week’s episode?  If you missed it we have you covered and have a full and detailed recap, right here for you.

On tonight’s episode Jenna is asked to go over to a fundraiser during the night, Tamara discovers a sorority that she loves and gets very drunk at a party. Lacey and Sadie meet two guys at a party and have some fun in the hot tub.

Jenna is at a college for an overnight visit with Tamara. She’s ready to recreate herself anew. She’s excited about her interview she needs to pass to get in. Tamara tells her their schedule and then makes her practice questions. Tamara tells Jenna her answer sucks and they need to get into the same college so she has to step it up. Lacey and Kevin are there and Kevin reminisces about his time on the campus and says it was the best four years of his life. Lacey glares and then he back pedals and says except for the time he’s been with her.

Tamara looks around and says the campus is like a Pinterest board of bangable guys come to life. She points out dudes she’d like to pin and Jenna tells her to focus. Kevin gives Jenna a sweatshirt and hat for good luck. Then she sees a shirtless guy that’s so hot he makes young Leonardo di Caprio look like old Leonardo. He strolls over with a party invite, not for the girls but for Lacey.

Matty tells Jake his parents are pissed about him totaling his car and Jake asks why he’s in beast mode. He starts to tell him and Jake gets a call and the moment is gone. He says he thought it was Autumn.

Jenna worries she won’t be able to get in while her dad points out all the places he puked on campus. The tour guide points out the Lit building and asks who among them is a writer. Lacey points to Jenna and then babbles. He asks Jenna who her favorite authors are and she chokes. He moves the tour along.

Val calls Matty in and says she’s noticed his anger and resentment. She tells him it’s okay that he’s gay and tells him it will get better. He insists he’s not but she reminds him that he worked at a shirtless job. He says he’s not.

Jenna approaches the tour guide Luke and tells him about her fave writers. He says he likes top and bottom shelf too. A sorority girl invites Tamara to a party that night. Luke invites Jenna to a fundraiser his band is playing at.

The guys ask Sadie why she’s not at cheerleading and she says she hates it. She says she can’t even bone because her BF is at a LEGO robotics competition. Jake whines about Autumn and Matty invites them all over for a party. Eva comes up and says she can bring Cristal from when she dated a wannabe rapper. Sadie asks why he invited her and says she’s a straight up creeper in everyone’s business. Val pops out from behind a car and asks who’s a sad creeper.

Tamara drags Jenna to the party and says the fundraiser sounded sad. They’re excited about their first college party and are expecting sophisticated fun. They grab Jenna and duck tape a forty to each of her hands and tell everyone she’s Edward Forty Hands. Everyone whoops.

Jenna gets loose but isn’t happy. She says her dreams of collegiate sophistication are shattered. The sorority girl talks about her sorority and Tamara is totally into it. She tells her she has to rush Kappa Gamma because she would be the perfect sister. Jenna tells her she’s going to the fundraiser but tells her to stay. She’s worried that even if they get into the same college, there may be no more Jennara.

At Matty’s, Eva tells a story and Sadie is being a bitch to her. Eva says that Matty seems wild but Sadie calls him Matty McKitten. He makes a cat sound and Sadie says it’s an inside joke. Eva says they should hop in the hot tub but Sadie says she has no suit. Eva pulls off her shirt and strips to her bra and the guys run after. Sadie unzips her dress and the guys say damn. Eva unhooks her bra and drops it. She tells Sadie she’s amazed at how comfortable she is with her body. Sadie drops her bra and says check out my amazing tits. Both girls get into the hot tub and Matty and Jake rip their own clothes off.

Jenna shows up at the fundraiser and greets Luke. She cracks a couple of bad literary puns and then he excuses himself. She panics and thinks she chased him off with her dork humor. Luke takes the podium and talks about growing up with a single mom. He says literacy programs like this made the difference.

Kevin and Lacey get back to their hotel room and he says he needs to lie down. She’s ready to keep partying but he passes out face down snoring. Lacey looks at him sleeping and heads out.

Tamara is worried she’s going to overdrink and ruin her interview. The girl hands her a sharpie and tells her to keep track and Tamara marks her arm. She turns and bumps into Lacey. They are horrified then each turn around and keep partying. Luke asks Jenna if she wants to get out of there.

They are drinking shots at Matty’s when he passes out. Eva says she can take him to bed but Sadie says she’s done enough and hauls him off.

Tamara tells her new friend about how she’s catfishing Jake. She shows her the two phones where Jake has been texting them both. She decides to celebrate with more booze and puts three more marks on her arm.

Sadie tells Matty to lie down while she gets some water so he doesn’t puke on himself. He lies on the bed and texts Jenna whose busy making out with Luke on a bed. He holds his phone but puts it down when Sadie comes back with water. She tells him to slow up. Matty tells her she’s so nice to her. He says she’s mean to everyone else but nice to her. He tells her she’s nice and pretty and she calls him drunkie. He pulls her down beside him and asks why they never hooked up.

She tells him she tried on New Year’s Eve but he passed out. He says it’s a big regret. He kisses her. She says eww and he says it’s like kissing his sister and for all he knows she could be. Matty tells her he’s adopted and his parents never told him. She asks if they know he knows. He says they’ve been lying to him his whole life so why should he tell them the truth. He says it just sucks and rolls over on his side. She spoons him and wraps her arms around him and says she’s sorry.

Jenna wakes up and helps Luke with the crossword. He tells her she’s going to ace her interview and she says she’s got to run. He asks if he can see her next week and says it’s a date. She’s thrilled and leaves. Tamara wakes up hungover on stairs and Jenna texts and asks where the hell she is.

Lacey is asleep on a bookshelf. She tiptoes in and Kevin asks about her walk of shame. He says he trusts her but he’s disappointed. She tells him not to parent her and tells him to shut up. She says he has four years of this but she never had it because she was raising their daughter because she was a teen mom. She tells him she deserved a night out and had six hours of foreplay from hot college guys and says he needs to finish her off pronto.

Tamara looks like hell at her interview. Her mascara is smeared and she’s in her old dress with her hair not brushed. He asks about the marks on her arms and she gets him to look behind him so she can vomit a little in his mug. Jenna kicks ass at her interview and the admissions guy says she seems like a good fit.

Next morning, Eva sees Matty and Sophie cuddled up asleep on his bed. She’s annoyed and snaps a photo with her phone. Jenna asks Tamara how her interview was and she lied and says she killed it and doesn’t want to go there. Jenna is excited about it. She sees a text from Luke then one last night from Matty. She ignores Matty’s. She is sure that college is going to be so much better than high school. They head home with her smiling and Tamara stressed.