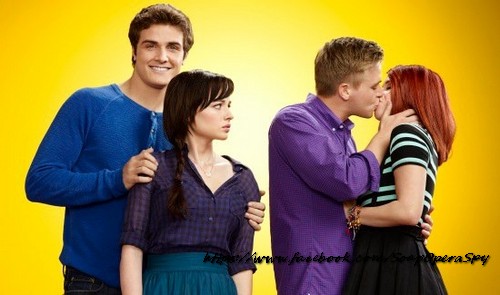 Tonight on MTV their comedy series AWKWARD about an under-the-radar teen airs with a new episode called, “Prison Breaks.” On tonight’s episode Jenna visits Luke at college. Meanwhile, Matty and Jake spend a night in jail; and Tamara has an unexpected hookup.

Last time on Awkward in “After Hours”, Jenna ended up setting Matty her ex-boyfriend and Eva up on a date, she wanted Matty to be happy and move on; but she acknowledged that she in fact still had feelings for Matty and felt uncomfortable about it. The group go on a night out.  Did you watch last week’s episode?  If you missed it we have a full and detailed recap, right here for you.

On tonight’s episode Jenna and Tamara head on over to the college SCU to go see Luke and meet some real men, but things don’t go exactly to plan. Matty and Jake end up going to jail to spend the night and Tamara hooks up with someone unexpected.

Sadie, Tamara and Jenna are pouting in the car when Jenna suggests a road trip to the college. Tamara agrees but Sadie says to take her home pronto and says she doesn’t want an eat, pray, suck road trip with those losers and wishes them good luck on Crossroad 2. Jenna says that movie was under-appreciated. Jenna walks in on Luke getting a massage from a random other girl. She’s in shock. Tamara goes off and says it’s a rub and tug with a fugg. Then she calls the girl and tells her she will beat her down.

Luke and the girl sigh and he introduces her as his best friend Shayne who is… wait for it… a lesbian. Matty and Jake are being processed at jail. Jake thinks they should ask for the gay wing as it may be nicer. They don’t ask Matty but do ask Jake and he’s offended. They are put in jumpsuits and tossed in with some scary dudes. They go to get their phone call but have no clue how to use the phone. They wonder whose number they know by heart. Matty says he would rather die in jail than call Jenna so he calls Sadie collect.

Sadie hangs up because she thinks it’s Ally for a DWI. Then Ally comes in and she asks if she escaped. She says she just wanted to remind her before all her drugs kicked in that she has a girls lunch tomorrow. Sadie stares at her phone and tries to figure out who could be calling her from jail.

Jake tries Jenna who doesn’t take the call. She apologizes to Luke and says she misses him. It’s mid-term time and Jenna and Tamara are both grossed out – Tamara more so because she’s looking for a hook up. A guy burps tuna fish on her and she freaks.

Jenna starts to kiss Luke but he says he has to study. She takes his note cards and says for every right answer he gets a reward. She asks him history questions. Tamara comes in to find in horror – the bathroom is unisex and runs off.

Jake has to go to the bathroom and tells Matty it’s graduated from a stand up job to a sit down one and Matty wishes him luck. Someone is in Matty’s spot but the guy scares him so Matty takes the top bunk even though he has to scramble up into it awkwardly.

Jenna and Luke head to the roof and she says it doesn’t smell like coffee and Ritalin up here. She pulls the flip flip out of the door and that leaves them locked on the roof. They pound on the door and she offers to make the most of it while they’re stuck but Luke is pissed. He tells her that she doesn’t understand how important his studies are because she’s just in high school.

Jake is dying from stomach cramps and when he thinks most everyone is asleep heads to the toilet but a giant guy beats him to it and says he needs to drop a few pounds up in here. Jake is grossed out and another guy tells Matty that he needs to keep his eye on his friend because he’s irritating people. He asks Matty what he’s in for and he says who the hell knows and he asks the other guy the same thing.

The guy says that he pulled a trigger and made things disappear. He says that his troubles with the law started when he was younger than Matty. Tamara comes back to Luke’s room and finds Shayne doing her nails. She says that her fingers must be important to a lesbian. Shayne asks if everything she thinks flies out of her mouth but Tamara says it’s all carefully curated.

She asks why Shayne isn’t cramming like the guys and Shayne says men are stupid, stanky and bad at time management. Tamara says she’s all about time management. They totally bond over their organizational obsession and choice of nail polish.

Luke tries to apologize to Jenna and tells her he’s on scholarship and his grades are crucial so mid-terms are extra stressful. He says he’s a complete dorkus about school but didn’t want her to think he was less than cool. He opens up to her and she admires his ethics and honesty. Jenna says to hand her the flash cards and says she’s going to help him.

Matty’s new friend tells him about being raised on the street and Matty says he just found he was adopted. He points out that Matty grew up with rich parents and then asks what his whip is and he says an Escalade and the guy asks how they had the nerve not to buy their adopted boy an S class. He tells Matty he was adopted by jerks then busts out laughing after Matty tells him he drove it off a cliff.

Luke is more busy making out with Jenna than studying and she tries to keep him on task but then gives up and makes out. Tamara says she came there to hook up but says college guys are just like high school guys. Shayne says she used to do guys but they are just such a hassle and says it all became clear to her once she was with a woman. Shayne says guys are douches and Tamara says her last boyfriend was trag-noxious – as in tragically obnoxious. She calls him Mumford and Dumbs.

She tells Shayne he never even gave her a big O and Shayne says never send a man to do a woman’s job. She starts to kiss Tamara who looks a little put off and then apologizes and says she’s sorry she misread the signals but then Tamara pounces on her and says – let’s do this.

Jenna and Luke are woken on the roof by the custodian coming out. They head into his room and he tells Shayne she has to stop hooking up with girls in his bed. The covers come off and we see it’s Tamara – she says good morning and Jenna is all OMG.

Matty is told he has a visitor and Jake begs him to let him go in his place so he can get to a real bathroom. Matty says to just make sure to get them out of there. He’s led out and it’s Sadie. He asks how she found them. She asks what the f- happened. He says the cops bought their fakes so they got arrested for open container and Eva ditched them.

Sadie says she’s going to kill Eva. Jake says if he doesn’t get out soon he’s going to do something crazy and she asks like what and he says like crap his pants. She tells them to give up their fakes and the cops will let them out ASAP because their minors. She says if they don’t to tell them she will tweet the LA Times and news of them keeping two cute minors locked up will spread faster than HPV at Coachella.

Jake is impressed. She says they should be out in an hour and he asks how she knows all this. Sadie says – Orange is the New Black. Tamara tells Jenna all about her experience with Shayne. She says she’s not sure they had sex but says the orgasms was amazing and she saw Jesus surfing a rainbow colored star. Jenna asks if she’s into gays now and Tamara says it was like when she wore that blazer around for a week – looks good on Ellen, but not on you.

They come in to find Eva with the ladies having breakfast and BS-ing. They ask how their night was and Valerie says no need to censor himself. They ask Eva what’s up and she says Lacey told her she could wait. They head to her room and Tamara sits to talk to the ladies. She tells them she kissed a girl and Val calls her bi-curious George.

Ally says a mouth is a mouth and Lacey says she could never do that with a girl but then Ally reminds her of one drunken summer and Lacey is floored that she got it on with her drunken bestie. Eva tells Jenna that the guys are in jail and that she bailed because of her shoplifting thing last year and says her dad will cut off her trust fund.

Jenna says it’s not her job to bail out Matty anymore and gives her his brother’s number and says he’ll know what to do. At the jail, Jake tells Matty what they have to do. Matty doesn’t want to give up his fake ID but Jake says he has to crap now and they have to go. Matty fist bumps Jordan and thanks him. He says if he can ever help him or put him in touch with a good attorney.

Jordan gets irked and says – man I am an attorney. Stanford class of ’02. Matty asks why he killed a man and he says he works in an investment bank and shorted some securities. He comes for him and the guys start screaming that they’re minors.

Jenna blogs about cutting people out of your life to make room for new ones. The guys walk out of jail and Jake is feeling much better. Matty says he’s gong home. Eva comes up and Jake chews her out but Matty asks what’s going on. She says she’s been in trouble and that if her dad finds out, she’ll be sent back to New York.

She says she went for help but Jenna was cold and told her to call his drug addict brother. She says she didn’t know what to do and has just been waiting out there. She asks for a conjugal visit. Jenna says she can’t let her Matty story get in the way of her Luke one. Last scene is Matty and Eva making out in her Mini.