BY Stormy Elizabeth on May 28, 2014 | Comments: one comment
Related : Recap, Television 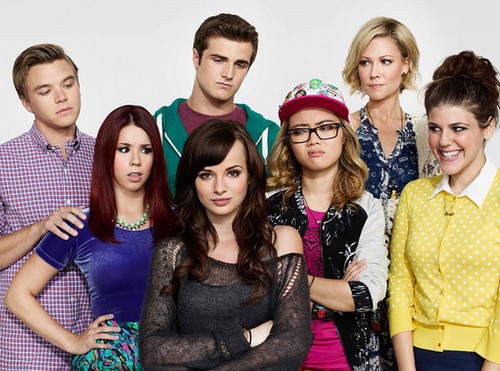 Tonight on MTV their comedy series AWKWARD about an under-the-radar teen airs with a new episode called, “After Hours.” On tonight’s episode Jenna sets Matty and Eva up on a date.

Last time on Awkward in “Crowning Moments”, Jenna was managing a male beauty pageant, Tamara was trying to stop cat fishing but she continued to do it to Jake, but he finally figured out that the girl named Autumn behind the phone was in fact Tamara.  Did you watch last week’s episode?  If you missed the episode we have you covered with a full and detailed recap, right here for your enjoyment.

On tonight’s episode Jenna ends up setting Matty her ex-boyfriend and Eva up on a date, she wants Matty to be happy and move on; but she acknowledges that she in fact still has feelings for Matty and feels uncomfortable about it. The group go on a night out.

Jenna Hamilton keeps talking about this new chapter in her life and yet her story of no matter what edition – sorry 2.0 – appears to be awfully centered on Matty. She had freaked out and pushed away her new boyfriend when she realized Matty saw her making out with someone else. Technically, the two of them haven’t been together as in a relationship (excluding their minor hook up earlier this season) for months. And yet she didn’t want to hurt his feelings by being seen to have moved on. Almost as if she still had feelings for him.

Although Jenna doesn’t see it that way.

What she does see is how crazy Tamara is acting because she lost Jake. Tamara had set up this big get together for all of them back when everyone was paired up accordingly. So as part of her “divorce” settlement from Jake – she demanded his tickets to the concert. She didn’t want to attend it with an ex. And neither did Jenna or Matty. Matty tried to give her his tickets and her new boyfriend, Luke, was the one that wondered why they couldn’t just go together. He was going to be busy with Mid-terms and he didn’t want Jenna to miss out on the concert. So Jenna and Matty were sort of guilt tripped into going together. To say no even after getting her boyfriend’s blessing would have meant they weren’t ok with each other.

And that would have required an explanation.

When Valerie brought in Tamara and Jake – she told them that their recent behavior has become unreasonable. They were making scenes in the cafeteria and it was getting to be too much. She asked them why they couldn’t be like Jenna and Matty. Those two have every reason in the world to be bitter towards each other, but they’re not the ones causing scenes.

So Tamara tried to rise above her usual antics. She chose to stalk Jake over social media rather than continuing to find a reason to get into his face. And it was working too. She was clam until she saw his update.

While Tamara, Jenna, Jake, Eva, Sadie, and Sadie’s latest boy were all trapped in a car together – Jake posted that he was in a hot tub with some ladies. Or skanks as Tamara likes to call them. Ever since Jake’s music career has taken off he’s been plagued by groupies and his ex hates that.

She doesn’t want him to move on, but she is honest about it. Unlike Jenna, who to prove a point set Matty up with Eva. She wanted to be adult enough to say she moved on and that plan quickly failed when she saw for herself how much Matty might actually like someone else. Jenna couldn’t stop making rude and sometimes downright mean girl remarks whenever she saw her ex get flirty with, mind you, the same girl she had arranged to be with him.

Though she should be wary about Eva. She isn’t what she seems and the only person to have caught on is Sadie. Sadie noticed that certain stories in Eva’s repertoire weren’t matching up. Like when she told them where they could get their fakes IDs because she used to go there, but earlier she had said she was in boarding school during the time she was supposedly getting her ID. So Sadie called her on it and in return Eva threatened her.

Eva had a picture of Sadie in bed with Matty and she was going use that to get Sadie to back off. However Sadie doesn’t like to be threatened and she ended up telling her boyfriend about everything. She told him that she fell asleep with Matty and that nothing happened outside one small kiss. And he wasn’t willing to forgive or overlook what she did. He ended up dumping her!

Plus the directions Eva gave Tamara to the booze place ended up getting Tamara’s car toad. So no one was enjoying themselves. Jenna was jealous, Sadie was dumped, and Tamara had to call Jake for a ride.

They managed to get Tamara’s car back and make it to the concert, but by that time no one was really feeling up to a concert. Jenna finally realized how she was acting and told Matty she was sorry. And then she ruined her apology by telling him she had his blessing. Matty didn’t want her blessing. It makes him sound like he needed it and after all things that Jenna’s done – he wanted to make sure that she knew she no longer had a claim on him.

It was a good thing when the group as whole split up. Tamara, Jenna, and Sadie went one way and Jake, Matty, and Eva went another. The all-girl group wanted to turn their night around so they’re heading to Luke’s school. While the guys got themselves into some trouble. Eva left them alone for about a minute and in that same minute she was gone – Matty and Jake were arrested for underage drinking.

They probably could have talked their way out of it Matty hadn’t kept giving lip to the cop! Sorry, but does this remind anyone of last season’s Jenna? Out of control behavior and a downward spiral that won’t end pretty. Yeah, it sounds like Season 3 Jenna to me!