BY Stormy Elizabeth on May 20, 2014 | Comments: one comment
Related : MTV, Recap, Television 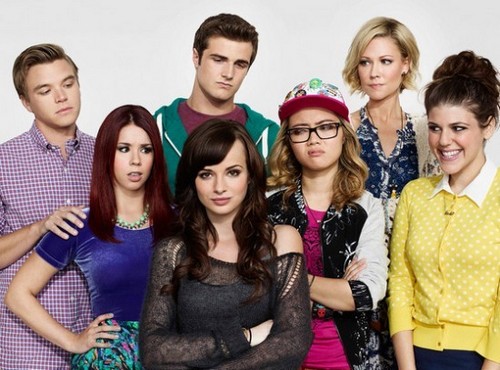 Last time on Awkward, Jenna was asked to go over to a fundraiser during the night, Tamara discovered a sorority that she loves and gets very drunk at a party. Lacey and Sadie met two guys at a party and had some fun in the hot tub.  Did you watch last week’s episode?  If you missed it we have a full and detailed recap, right here for you.

On tonight’s episode Jenna going to be managing a male beauty pageant Tamara is trying to stop cat fishing, but she’s continuing to do it to Jake, but he finally figures out that the girl named Autumn behind the phone is in fact Tamara.

Jenna and Luke have been seeing each other for three weeks and says she’s Jenna 2.0 and is better and more evolved. Luke invites her on a road trip to see Arctic Monkeys. He says he keeps forgetting she’s still in high school. He worries she won’t be able to go but she says her parents are really chill. Jenna ignores a couple of calls and then Luke answers his phone. It’s her dad and she asks how he got Luke’s number and he says he called and threatened to have Luke arrested. He tells her she is a child and is out 45 minutes past curfew. He tells her to get home now and clean her room.

Jenna is annoyed with being cheer bitch as Sadie throws a pom pom at her face. Matty is stressed about the scout being there. His parents hassle the scout. Jake asks if his parents are back together and he says they hate each other as much as ever but are presenting a united front for the scout because that’s how they roll. Matty is pissed. They cheer for him and he plays heard but misses a goal. His mother curses loudly.

Tamara tells Jenna to get busy and says she needs to get on the male beauty pageant. Tamara tells her to get off of cloud 69 and Jenna hears her fake phone chime and asks why she’s still catfishing Jake. Jenna tells her to ditch Autumn and tell Jake how she feels. Tamara isn’t ready to call it quits. Jake tells Matty he’s really into Autumn and Matty says she’s probably a 45 year old dude.

Lissa’s mom blows her off and tells Sadie to take her home. Tyler, her adopted brother, is the only thing her mom cares about and Sadie tells her to get it together. Lissa thinks she can coach Tyler for the pageant and Sadie says she can pick any idiot guy and beat her and Mufasa. Sadie tels her to pick any guy. Lissa looks around and points to Kyle who is inexplicably licking his own arm.

Jenna asks Matty if he has picked a talent for the show. He says he heard she’s into older guys now and tells her it’s cool. Luke skypes Jenna and she says she misses him. He says he’s living off $5 foot longs and can’t wait to see her. He says he’ll come to town to see her since she’s stuck in town. She tells him it’s not worth the drive and he strips off his shirt but then her parents come in and he pulls it back on.

Lacey invites Luke to come down for the Mr PHHS pageant and he says he’ll come down. Jenna says he doesn’t have to but her parents push and he agrees.

Jake talks to Tamara but she’s pretending to be Autumn. He tells her he feels like he could tell her anything. She’s doing an awful fake Australian. She tells Jenna that Jake invited Autumn to the pageant. She says Autumn is going to show but then have to leave.

Sadie, Austin and Ally look at Kyle’s half naked torso and worry that he’s too pathetic to be worked with. Sadie wants to dump him in a biohazard bin. They try to wax him and he screams. Lissa is working with Tyler in the gym. She says he still needs a talent and she asks if he’s ever seen dirty dancing. Jenna worries this will all look like a high school feak show to her college BF.

Val says she needs helpd decorating because the PTA moms ditched when she wouldn’t give up the bathing suit routine. Kevin agrees to help the guys wth their dance number. He calls for the music and shows the guys how to work it. He still has it. He rips open his shirt (he’s so buff and cut) and says to add some heat.

Matty tells Jenna he’s going to do stand up and his mom says he’s going to embarrass himself. He tells her he’s not trying to win and he asks why she’s worried. She says because she’s his mom and he says yeah and walks off.

Ally is there to carpool with them since she’s always too drunk to drive after 4 and Kevin is in an embarrassing shirt. Lacey tries to rip it off him and just then Luke comes in and Jenna is humiliated. They head up to school. Tamara welcomes everyone to the pageant. She says they are about to meet some major man candy.

The guys come out and do the opening dance number and it’s pretty hot. The ladies scream and go wild. Backstage, Sadie tells Kyle if he screws it up she’ll make sure he’ll die a virgin that not even an old crazy cat lady will sleep with. Val steps up and asks if someone called her name. Kyle is first up for the formal wear competition. Sadie smirks at Lissa.

Kyle comes out in a tux and gets some squeals from the ladies. He blows a kiss and Lacey calls him a hottie. Ally tells him to take it off and he walks off scared. Next up is talent. Tyler and Lissa do a dirty dancing number. He even does a little lift then a bigger one. The crowd loves it. Kyle paints a weird picutre as Ally asks WTF. Then he flips it over and it’s him all muscly wearing the crown. Jake plays his guitar and sings. Tamara smiles offstage until he says the name Autumn in the song.

Charles come out to juggle. Jake calls Tamara and she pretends to be Autumn and says she saw it. Tamara calls out a stage direction and Jake hears it. He realizes finally that she’s been catfishing him. She runs off after him and Val takes over. She introduces Matty. He says he’s doing his college applications like a first date – he says he has to drop $80 to get brutally rejected and the audience laughs.

Jenna asks him to stop and then he drags her on stage. He asks if she remembers that his parents called her a slut for going on birth control then threw him out. He asks if she remembers when he moved in with her and she couldn’t take a dump for a week – he says that was a real gas and makes a fart sound. Jenna is totally humiliated. Matty asks his mom how he’s doing then Ally yells out – show us your balls. Matty throws down the mic and walks off. Luke watches this all.

Jenna follows Matty offstage and he tells her he’s so, so story. Luke gets up and walks off as she watches. She says all her high school drama has come out and Luke couldn’t handle the show.

Val says they are down to three finalists – Kyle, Tyler and Jake. Jake doesn’t come out and Val makes a last call for him. Val asks Tyler about his cherished dream – he talks about education and ending suffering anywhere. Sadie says he’s a cliché but Austin says he’s sincere. She tells him to get over it. Kyle says last night he had a dream he was eating sushi and was told it was human flesh and he liked it. He says when he woke up the bed was wet. Sadie is horrified.

Val announces Tyler as the winner. The crowd and Lissa cheer. Jenna walks out and says she isn’t Jenna 2.0 but just Jenna. Luke waits outside and she says she know her life is embarrassing. He says he left because he wanted to cheer her up. He left to go get her a pumpkin spice latte and flowers. He says he hasn’t been out of high school that long and remembers the drama. He says he wasn’t nearly as cool as she is and he really likes her a lot. He pulls her in for a kiss. Matty watches and has the saddest look on his face.