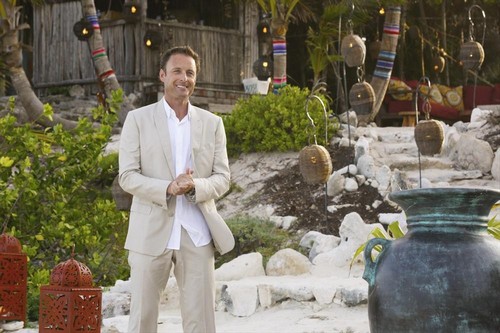 Bachelor in Paradise airs tonight on ABC and in this evening’s episode former contenders from “The Bachelor” continue to find love matches and it is going to be very interesting and dramatic. Tonight Chris issues an ultimatum to the remaining cast; the couples go on overnight dates.

On the last episode, the remaining contestants were still recovering from a very dramatic week, but with their stay in paradise coming to an end, they all wanted to make the most of the time they had left. Marcus received a date card and decided to continue investing all his time in Lacy, so the two headed to the enchanting Cenote Dos Ojos. Michelle M on the other hand was overwhelmed and wondered if she should break things off with the fast-moving Cody. Did you watch the episode? If you missed it we have a full and detailed recap, right here for you.

On tonight’s episode in the season 1 finale, host Chris Harrison presents the couples with an ultimatum: they must leave the island unless they can see their relationships continuing in their daily lives. Later, the final two couples attend the season’s last rose ceremony.  Will their journey end in tears of heartbreak or tears of joy? All is revealed in the shocking season finale of “Bachelor in Paradise.”

RECAP: Tonight’s season finale of Bachelor in Paradise begins with the bachelors and bachelorettes waking up the morning after the final rose ceremony. They are impatiently waiting for Chris Harrison to arrive and reveal what big twist is in store for them. Chris finally arrives and interrupts their breakfast, he announces there will be no more date cards, new arrivals, or rose ceremonies. He tells each of them to take a good, hard look at their relationships and decide whether they will continue their relationship in the real world. If they don’t plan to stay together, then they need to break up now and leave paradise. Chris leaves and the bachelors and bachelorettes are in shock, and begin contemplating their next move.

While the girls are all gossiping about whether they will break up with their men, and Michelle is disgusted about what AshLee is saying about Graham. Michelle storms out and says she needs to talk to Graham. She heads to the guys’ beach house, and asks Graham if they can talk privately. She confesses she is freaking out about him and AshLee, and tells him that she isn’t genuine and she is just here to be on a TV show. Michelle straight up tells Graham that AshLee “is not right for him.” Back at the girl’s house, AshLee is delusional and thinks that Michelle is telling Graham positive things about her and encouraging him not to break up with her. Back at the boys’ house Graham is crying and Michelle is hugging him and comforting him.

Graham heads to the girls’ beach house and asks AshLee to come down to the beach with him so that they can talk. Graham informs her that he isn’t feeling great about their relationship and he doesn’t see it lasting in the real world. AshLee thinks that they owe it to each other to see what their relationship will be like in the real world. Graham isn’t buying it though, he tells her that he can’t continue dating her and apologizes. AshLee is not happy, and argues that Graham should have been up front about his feelings from the beginning because she really thought they were going to stay together. Graham and AshLee head back to the houses to pack their belongings and leave paradise. Michelle comforts Graham while AshLee leaves the house without even saying goodbye to anyone.

Tasos Hernandez and Christy Hansen have been dating for a total of two days, so they both decide that it makes sense to break up and go home and agree they don’t have a future. Jackie and Zack also started dating late in the game, and agree that they aren’t that serious about each other. So, Christy, Tasos, Jackie, and Zack are all saying their good-byes and heading home solo. Marcus and Lacy are a done deal, they don’t even have to have a conversation, it is obvious that they are staying together. Sarah and Robert sit down on the beach and decide that they will stay together in paradise and not break up.

Michelle Money and Cody Sattler still haven’t had “the talk” and Michelle has no idea whether she and Cody should break up or stay together. She thinks Cody is so many steps ahead of her with his feelings, that she can’t figure out if she will be able to catch up to him. Michelle decides to call her daughter and get some advice about whether or not she should stay together with Cody. Her daughter reassures her that if he likes her and her personality and they have a lot in common, then they should stay together. Michelle agrees and tells Cody that she doesn’t want to break up.

Chris Harrison arrives and visits the three remaining couples, Cody and Michelle, Marcus and Lacy, and Sarah and Robert. Chris announces since they are all moving forward with their relationship, they have to be real and honest with each other. They will all go on one more date in paradise, in overnight fantasy suite dates. Chris says that after their overnight dates, they will have to decide whether or not they want to stay together. The couples have an hour to get ready and then they head to their fantasy suite dates for the night.

The morning after the fantasy suite dates, Marcus and Lacy leave hand in hand gushing about how amazing their night was. Sarah and Robert leave the fantasy suite date and Robert brags about how “perfect” their night was. Cody and Michelle are the last couple to return home, Michelle says that she feels satisfied and everything is crystal clear, she announces that Cody is now her boyfriend. Sarah watches Marcus and Lacy and Cody and Michelle make out around her, and she realizes that she and Robert’s night was not half as amazing as the other couples. Sarah confesses that Robert was tired and they went to bed early, and he wore jeans in the bed with her, she feels rejected.

Sarah takes Robert so they can talk alone. She tells him that he is sweet to her, but they didn’t connect on any emotional level last night, it bothers her that he isn’t excited about her like Marcus and Cody are excited about Michelle and Lacy. Robert is confused because he thought they had an amazing night, she argues that last night she felt “not loved.” Robert apologizes and says that he’s sorry she feels that way. Sarah and Marcus head back to the beach houses to pack their stuff and leave paradise, their relationship is officially over.

Michelle and Lacy rush to comfort Sarah as she cries. She tells them what happened in the fantasy suite last night, and how Robert went to sleep on her and they didn’t even talk or kiss. Michelle sympathizes for her and says that she is “heartbroken for her.” Robert is devastated while he is packing, it’s hard for him to open up to people, and he wishes he had been able to get closer to Sarah.

The remaining couples, Marcus and Lacy and Michelle and Cody head down to the beach to meet Chris Harrison. Chris congratulates them all on their relationships, and then brings in Sean and Catherine, Des and Chris, and Molly and Jason to sit down with the couples and offer them advice on re-entering the new world. They all play rapid fire questions to see how well the new couples know each other. Sean and Catherine give the couples their seal of approval, and they are sure that they are truly in love with each other. Jason agrees that all four of them clearly came to paradise in search of love, and they are genuine about their feelings.

All six of the bachelor and bachelorette alums believe that Marcus and Lacy and Cody and Michelle will stay together when they return to the real world. Chris puts out for roses, and tells them it is time for the final rose ceremony. Cody and Michelle profess their love for each other and accept each other’s roses, they leave paradise together hand in hand.

Now it’s time for Marcus and Lacy to exchange their roses. Marcus takes Lacy aside and says that he needs to talk to her in private before they do the rose ceremony. Marcus leads Lacy down to the beach, he tells her that meeting her was the best gift he ever received, he thought he knew what love was before, but Lacy taught him what true love is. He tells her he wants to make her the happiest girl in the world, and gets down on one knee and asks Lacy to marry him. She cries and accepts the ring and then jumps in to his arms. Molly, Jason, Sean, Des, Catherine, and Chris all rush down to congratulate them on their engagement.