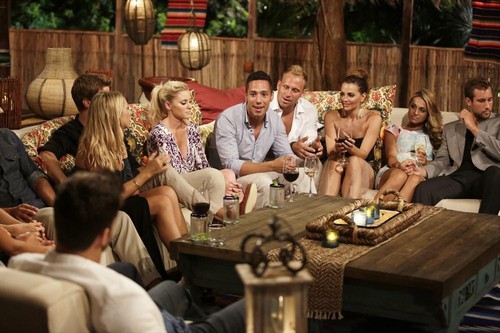 Bachelor in Paradise airs tonight on ABC and in this evening’s episode former contenders from “The Bachelor” continue to find love matches and it is going to be very interesting and dramatic when two new bachelors arrive on the scene, and one throws a wrench into a blossoming relationship. Meanwhile, a betrayed bachelorette looks to another man for love.

On the last episode, the men gave out roses while the women asked for the dates. The men featured in this episode were: Graham, Robert, Zack, Marcus, Cody, Jesse. The women featured, were: AshLee, Lacy, Clare, Michelle, Sarah, Jackie. Lucy Aragon (Juan Pablo’s season) and Christy Hansen (Juan Pablo’s season). Christy asked Zack for a date, but he rejected her invite, so she went out with Jesse instead. Lucy also asked Zack out for a date, and he also rejected her, so she too, went to go on a date with Jesse instead. Did you watch the episode? If you missed it we have a full and detailed recap, right here for you.

On tonight’s episode The remaining contestants are still recovering from a very dramatic week, but with their stay in paradise coming to an end, they all want to make the most of the time they have left. Marcus receives a date card and decides to continue investing all his time in Lacy, so the two head to the enchanting Cenote Dos Ojos. Michelle M on the other hand is overwhelmed and wonders if she should break things off with the fast-moving Cody.

RECAP: Tonight’s episode of Bachelor in Paradise kicks off with Michelle Money having a heart to heart with Cody Sattler, he told her that he loved her, and Michelle is totally freaked out by how serious he is. Michelle tells Cody that she wants to slow down their relationship, and they should just focus on building a friendship. A date card arrives for Marcus, and he chooses to take Lacy with him (shocker).

The next morning Lacy and Marcus head out on their 1-on-1 date. They follow a trail through the woods, and find an arrow pointing in to a dark hole in the ground with a ladder. After some hesitation they climb down the ladder in to the cave. There is water up to their knees so they strip down to their swimsuits and wade through the water, while they are swimming along they hear squealing and realize they are surrounded by dozens of bats. Marcus and Lazy make it through the end of the cave, despite the swarm of bats. Lacy gushes that they “faced their fears together.” At the end of the cave they are surprised with drinks, they cuddle in the jungle together and Lacy confesses to Marcus that she is falling in love with him.

Back at the house Michelle is venting to Jesse about her relationship with Cody. She fills him in on Cody telling her that he loved her already, and admits that she doesn’t see them falling in love with each other like Marcus and Lacy did. Jesse tells Michelle he thinks that she should cut Cody loose now, or else she will end up miserable.

Down at the beach a new guy arrives in paradise, Brooks Forrester from Desiree Hartsock’s season of The Bachelorette. Sarah Herron is shocked to see Brooks walking down the beach, she actually was hoping Brooks came because she has a huge crush on him. She is kind of annoyed that he showed up so late, because she has already been hooking up with Robert. She secretly wants Brooks to ask her on a date. Brooks sits down with Robert and Zack, and they ask him who he is going to invite on his date. Robert tells Brooks that if he asks Sarah out on a date he will kill him. Brooks heads back down to the beach with his date card and asks Jackie out on a date with him to dinner, she says “yes.”

Jackie and Brooks prepare to leave for their first date, Sarah watches the leave and is obviously disappointed. Brooks and Jackie head out to dinner in Tulum. Brooks is determined to win her over so that he gets a rose at the rose ceremony. Jackie is instantly impressed when she realizes that Brooks can speak Spanish at the restaurant. She thinks Brooks is cute, but she feels a little awkward since she just accepted a rose form Zack.

Back at the beach Zack is chatting with Graham, he isn’t exactly thrilled about Brooks asking Jackie out on the date. He feels guilty that he didn’t tell Brooks that he was “kind of with Jackie,” and he is going crazy wondering if they kiss on their date. Meanwhile on their date Jackie and Brooks are playing fooseball at the restaurant, Brooks bets Jackie that if he wins she has to kiss him, unfortunately Brooks loses the game so he just kisses Jackie on the cheek.

Sarah finds a sweet note from Robert inviting her to come down to the beach with him for some 1-on-1 time. They drink wine on the beach and Sarah asks him what he plans on doing once they leave paradise, Robert says that he wants to take her out on a real date when they get back home. Sarah is happy to realize that Robert is serious about them and plans to continue their relationship after the show is over. Sarah is sure that she will fall in love with Robert and she is glad that Brooks arrived, because it made her realize that Robert is the guy for her.

Meanwhile down the beach a ways Michelle and Cody are having a serious talk about him confessing that he loved her. Michelle admits that it scares her that he is coming on so strong and she feels overwhelmed, Cody reassures her that he will give her as much space and time as she needs. She insists that she adores Cody and his honesty, she just wants them to work on creating a strong foundation first.

Back in the house Jesse is bragging about going back to the room and having sex with Christy. Michelle has had enough of Jesse’s crap, and takes Christy aside and tells her that Jesse hooked up with her and Lucy, and is bragging about it to everyone. Christy is disgusted that Jesse is such a “douche-bag” and wishes he could just go home now.

The next day Michelle and Christy are laying on the beach and they see a man walking down the beach, it’s Tasos Hernandez from Andi’s season of The Bachelorette. Michelle talks to Tasos and reveals that she is with Cody, but she really wants Tasos to ask Christy out on a date. Tasos hads back down to the beach and invites Christy on a 1-on-1 date, she happily accepts. Jesse watches them leave, and is squirming because he knows that if Christy gives Tasos a rose tonight instead of him, he will have to go home.

Christy and Tasos head out on their date, and Christy is excited to get away from Jesse for the day. They board a boat and head in to paradise. They arrive at a cove and the captain of the boats gives them tubes so they can float down the water together. They arrive at a dock and sit down to have a picnic together, afterwards Tasos tells Christy that he really wants to kiss her. Christy is impressed, she thinks Jesse isn’t half the man that Tasos is.

Back home Jesse is ranting to Cody that he doesn’t like Christy going out on a date with Tasos. The guys head down to the beach to play football, Jackie and Brooks play basketball together and Zack watches from the sidelines. He is worried that Jackie is going to give her rose to Brooks over him, Brooks is determined to monopolize his time with Jackie.

Jackie and Zack head out on their date and arrive at a cave, they strip down to their bathing suits and go swimming inside the cave in the dark. Jackie admits that she has been on four dates in paradise so far, and the cave is by far the most amazing date she has ever been on. Once they finish swimming in the cave they sit down and have drinks together, and Zack admits that he was upset today that she kept getting pulled away from him by Brooks. While Jackie and Zack are making out in the cave, Brooks is back home complaining that he wanted to spend time with Jackie.

It’s time for the rose ceremony, all of the guys and girls gather for the cocktail party. The girls will be handing out roses tonight, and two guys will be going home. Zack and Jackie sit down and he tells her that he feels a real connection with her and gives her a wish bracelet. Brooks swoops in sits down with Jackie and surprises her with nail polish and paints her nails for her. Meanwhile Tasos and Christy are talking, and Christy reassures him that she definitely likes him over Jesse, Tasos is hopeful that he gets a rose so that he can continue to get to know her.

Jesse sits down with Christy and tries to campaign for her rose, he says he wants to spend more time with her. Christy tells him that she doesn’t want their relationship to go any further, Jesse blames it on the fact that Christy wasn’t “open enough with her.” She jokes that Lucy was very open with him. Jesse announces that he is just going to quit Bachelor in Paradise. He heads back inside and announces to everyone that he is leaving before the rose ceremony. Michelle and Lacey give Christy a pep talk and tell her that she can’t let Jesse treat her the way that he did. Jesse climbs in the limo to leave, and Christy follows him. She calls him out and tells him that he is being a coward and he is quitting because he knows that he isn’t going to get a rose and he doesn’t want to look dumb. She tells him that she knows he hooked up with Lucy and Jackie. Lacey interrupts and starts cursing Jesse out and telling him how disrespectful he is. Michelle joins in and tells him that the way he was talking about the girls in paradise was cruel and degrading. The girls are shocked by how unapologetic Jesse is, he shows no remorse.