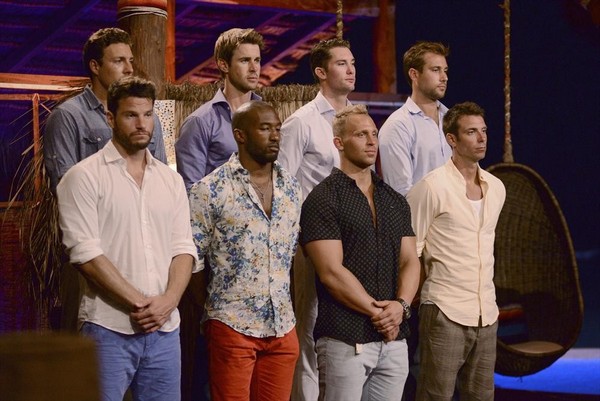 Bachelor in Paradise airs tonight on ABC and in this evening’s episode former contenders from “The Bachelor” continue to find love matches and it is going to be very interesting and dramatic when Clare just up and leaves the show due to Zack’s roaming actions.

On the last episode,  Cody Sattler, a hunky new bachelor, arrived in paradise with a date card and a mission. He immediately made a hard sell for Clare, but was dejected when she revealed that she was in a relationship with Zack. In the spirit of keeping romance alive, the kind-hearted Cody gave his date card to his friend, Marcus, so he could continue to build his blossoming relationship with Lacy. Meanwhile, Michelle, who was still anxiously waiting to make a connection, was asked out by the latest bachelor to join the house, the infamous Kalon McMahon. She reluctantly agreed, but later regreted the decision and declined the offer. For the first time in “Bachelor in Paradise” history, the new bachelor decided to go on the date alone. He headed to the beautiful Cenote Maya in the Yucatan for a lonely day of rappelling and swimming. To everyone’s surprise a third bachelor, Jesse Kovacs, arrived and invited newcomer Jackie on a date to the stunning Rio Secreto where he seemed to win her over, leaving her other suitor, Marquel, in jeopardy of going home. Did you watch the episode?  If you missed it we have a full and detailed recap, right here for you.

On tonight’s episode the men are going to give out roses while the women ask for the dates. The men featured in this episode will be: Graham, Robert, Zack, Marcus, Cody, Jesse. The women featured, are going to be:  AshLee, Lacy, Clare, Michelle,  Sarah, Jackie. Lucy Aragon (Juan Pablo’s season) and Christy Hansen (Juan Pablo’s season). Christy is going to ask Zack for a date, but he will reject her invite, so she will go out with Jesse instead. Lucy will also ask Zack out for a date, and he will also reject her, so she too, will go on a date with Jesse instead.

Graham ran away because he had begun to feel ill and yet AshLee did not at any point in time go after him. Graham was obviously suffering some sort of anxiety attack. At least that’s what the other contestants (mainly people who don’t like AshLee) are saying and few of his real friends even had to go check up on him. But afterwards he swore that whatever he was going through was quick passing and came back to the stage prepared to finish the rose ceremony.

When he returned, everyone thought he was going to turn AshLee’s rose down. She had coldly ignored him when he was ill and only looked interested when she knew the cameras were back on her. So some people felt Graham deserved better.

Lacey, for one, honestly thought Graham wouldn’t take the rose when AshLee offered it and she was disgusted by Graham’s decision when he did take the rose despite AshLee being AshLee. So when Lacey began complaining of stomach problems – some of the other women chose to assume she was simply manifesting her disgust with AshLee into a physical symptom. However that wasn’t why she was sick. Lacey ended up having to go to the hospital after it became clear that her vomiting wasn’t an overreaction and Marcus kindly went with her.

He also stayed put with her at the hospital and later when she returned to the hotel.

And in the meantime, everyone back at the ceremony had continue handing out roses and in such cases someone was bound to be disappointed. Marquel merely thought he had formed a special bond with Jackie and as it turns out she had formed the exact same bond he was talking about with someone else. So he was sent home along with a fellow male contestant and Jackie stayed put at the resort in Jesse’s arms.

Though Jackie might come to regret not choosing Marquel when she had the chance. The day after the Rose Ceremony, a new girl arrived by the name of Christy.

Christy was given the down low about who is with who and at first she tried to pursue Zach. But Zach turned her down seeing as he wanted to give what he has with Clare a fair chance. So as a second choice – Christy went after Jesse. And he said “yes” to a date.

Jesse doesn’t think him agreeing to a date with someone else was going to affect Jackie. As he told Christy when they were on their date, he knows Jackie would have done the same thing in his shoes. Hence he wasn’t that concerned about her. As for Jackie, she was more hurt that she was left in a house that was clearly paired up. So maybe these two don’t care about each other as much as they should though that doesn’t mean Jackie isn’t going to be upset with Jesse.

Jesse truly enjoyed himself on his date with Christy and she had felt the same way. Yet, when they rejoined the group, these fast friends began to act inappropriately in front of everyone. They were drunk and so they came back to the resort loud and rambunctious. And Jesse didn’t seem to care that he was flaunting his new relationship in Jackie’s face.

From first impressions, Christy is someone that doesn’t take anything too seriously. It feels like she’s looking for a good time and some of the guys are responding to that. This includes Zach. Even though he turned her down, he’s still interested in Christy because that’s the type of relationship he secretly wants. Deep down he wants less of Clare’s intensity and more opportunities to have fun. Like the kind Christy can provide.

And when he told Clare this – she didn’t handle it well. If she can’t be what he wants then she doesn’t want to stick around feeling foolish like she did with Juan Pablo. So after a quick sojourn into the jungle by herself she came to the conclusion that it would be in best interest to just go home from now.

Clare told Zach what she was going to do and for about a minute he tried to talk her out of it. Then he escorted her to the car she already had waiting for her.

With Clare leaving on her own volition, the group thought that there would be enough roses for everyone. But the producers threw in someone new. Lucy is another one from Juan Pablo’s season and it wasn’t long before this flirty bohemian quickly made friends. Especially as she loves to go around in the nude.

Sarah was definitely apprehensive about Lucy joining the group. She and Robert finally started to get intimate after their recent date and then all of a sudden a nudist arrives. Of course all the guys’ eyes are drawn to her. However Sarah doesn’t have to worry about someone being interested in her Robert when all the new girls tend to drift towards Jesse’s direction.

Lucy and Christy are friends but that doesn’t stop the ladies from openly competing for Jesse’s affections. Lucy asked him out on a date and he said “yes” which made Christy feel bad because she thought Jesse was interested in her. And Jackie, who apparently has been forgotten by both Jesse and Christy, is worried about elimination. Except for Jesse, she hasn’t formed an attachment to anyone else.

Later Christy felt bad that she wasn’t paired up and so she found Jesse after his date. And the two of them were soon making out when Christy got to thinking that Jesse had only accepted to date to make Lucy feel better. Sure, that’s why! Then when they were making in the room – Lucy joined them to make it fun for three rather than merely for two!

Then there’s Michelle and Cody. Cody is really into her, but he’s going about it the wrong way. Lacy could see for herself that Cody was coming on too strong. Yet she didn’t warn him. She allowed him to continue on and what she predicted ended up coming true. Michelle eventually felt like she needed a breather from Cody.

Everyone loves Cody. He’s a good guy and he wants to be good enough for Michelle. But the producers might have pushed things too far with one of their pre-arranged dates. They wanted Michelle to have a glimpse at the future so they arranged a photo-shoot for Michelle and Cody to pose as a newly wedded couple.

Cody like the idea and Michelle didn’t. It had her freaking out until she got to the point that she wanted to take a break from Cody.

Before you know it, the time for another Rose ceremony came around. And in their final desperate moments, the women that knew their chances about staying were dangling at best; started to create their own plan B. Jackie started talking to Zach to see if there was anything between them. And that left only Lucy and Christy, the supposedly very good friends, having to fight for Jesse.

But Lucy doesn’t fight fair. She put it in Christy’s mind that Jesse made certain reassurances to her and then she went to Jesse and said “oh, Christy didn’t even know that it was you climbing into the bed”. So she tried to turn them against each other and the one person to notice her dirty handwork was Sarah. Sarah can see that Lucy isn’t on there for the right reasons and yet she doesn’t say anything to Jesse.

Why didn’t she warn him? Well, most of the women believe Jesse to be a dirtbag. They don’t think he cares about any of the girls so fooling around with them is downright wrong on his part.

Then the ceremony took place and Jesse was left with a tough decision. Zach had chosen Jackie and the only two girls left were both recent editions to paradise. Not that Jesse let that stop him from going out with each of them, but he also doesn’t know them too well.

So he went with Christy. They had fun and at least he remembered her name. And Lucy went home where she suddenly morphed back into Christy’s friend and started to worry how Christy will react when she learns what kind of guy Jesse truly is!