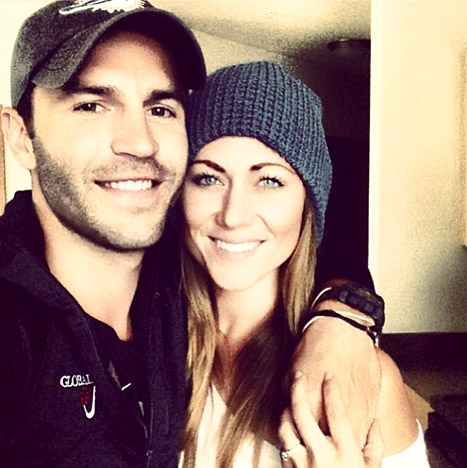 Bachelor viewers were pretty surprised during Season 18 of The Bachelor when Juan Pablo eliminated fan favorite and single Mom, Renee Oteri. Renee came across as a sweet, and genuine woman, and it was obvious she truly was looking for love. Right before she was eliminated she even confessed to her Mom that she was in love with Juan Pablo. In what some Bachelor fans have coined the most vicious move Juan Pablo has made yet, he coldly eliminated Renee Oteri after he went on a hometown date with her and met her eight year old son Ben, and her Mom.

We all felt for Renee Oteri, but once she watched The Bachelor air on ABC and followed the stories about Juan Pablo in the press, she probably realized she dodged a bullet. I think I speak for every Bachelor viewer when I say Renee is not question about it, too good for Juan Pablo.

It looks like Renee Oteri got her happy ending though. On Monday during the Women Tell All episode Renee confirmed to Chris Harrison that she was indeed in a happy relationship, (with a man named Bracy) and it sounds like she was being modest. According to ABC News, Renee Oteri is actually engaged! The ex-bachelorette posted a photo of her engagement ring on her personal Facebook page yesterday, but she is keeping the identity of her new fiancé under wraps for now.

It does seem a little soon to be getting engaged, when Renee was professing her love for Juan Pablo less than a month ago, but nonetheless we are happy for her. If any the girls from Juan Pablo’s season of The Bachelor deserve a happy ending, it’s Renee Oteri!