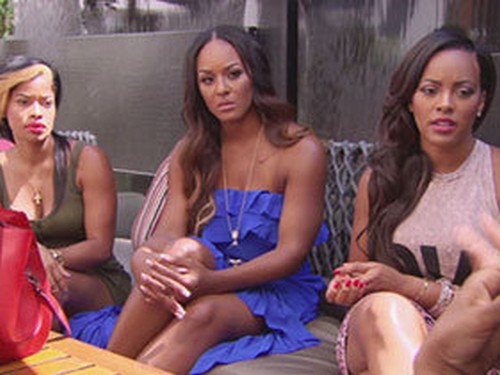 Tonight on VH1 BASKETBALL WIVES OF LA returns with its season 3 premiere and on tonight’s episode, Brittish throws a “Turkish tea party” for the gang. Elsewhere, Brandi and her husband visit a fertility specialist.  Did you watch last week’s season 3 premiere?  We did and we recapped it right here for you.

On last week’s episode it began with a surprising revelation. An ongoing love triangle with one of the cast members was exposed and caused major turmoil in the group and the three new ladies were forced to take sides.  Jackie invited some ladies of the league to meet and plan an event, but as the new girls got to know each other, the claws came out, and when the focus turned to Draya, it all went left.

On tonight’s episode the last time these women got together, it was nothing short of a disaster, but Brittish is determined to give it another shot and throws a “Turkish Tea Party” for the group. Meanwhile, Brandi’s time to have another baby is running out, so she and her husband Jason seek the help of a fertility specialist.

Tonight’s episode is going to be filled with the usual Basketball Wives of LA drama and you won’t want to miss it, so be sure to tune in for our live coverage of the show tonight at 8 PM EST! While you wait for our recap hit the comments and let us know how excited you are about the new season of  “Basketball Wives of LA”  Also we have a sneak peek video of tonight’s show below – and don’t forget to read our exclusive interview with Ariane Williams!

Draya and Malaysia meet up and Draya spills the beans about Jackie’s little gathering where she attempted to talk about her proposed events, and allow some of the new girls to get to know one another. For those of you who watched last week…you know it did NOT go over well.

Draya makes it clear she does not like Brittish, and labels her the “chubby one” since she tells Malaysia she cannot remember her name. Draya says all the girls were getting crazy and Jackie just sat and watched. Draya and Malaysia think Jackie has a plan.

Jackie and Sundy met up and talked about Brandi and how she questioned Sundy about the personal issue with her daughter when they first met. Jackie is trying to keep the peace between everyone and wants to get to know these new women better. She asks Sundy what she thinks of Draya. Jackie is surprised to find out Sundy met Draya in the strip club years ago. She has the dirt on Draya and now Jackie knows she was lied to by Draya. Draya was a stripper 4 years ago. Jackei asks her why she didn’t bring it up, but Sundy plays it classy and said it wasn’t the appropriate time at the first meeting.

Brandi and her husband are at the doctor trying to find out if it is safe for her to try to become pregnant. She is worried about the cancer coming back. Her numbers come back okay-so she doesn’t need to worry and can actively start working on getting pregnant.

Jackie, Malaysia, Brandi and Ariane meet up at the potential location for Jackie’s event. Malaysia seems to already have her mind made up about Ariane with the looks she’s giving. Seems Draya got to her and put the spin on her story and Malaysia and Draya are friends. Jackie seems to get the tensions down after Ariane and Malaysia talk about Draya and Ariane’s ex having a past. When Malaysia asks if Ariane is still with her ex DeShawn, she laughs a little and says “we’re complicated.” Interesting…

Jackie invites Brittish to do some shopping with her. Jackie brings up the first meeting and after hearing Brittish talk about her feelings about the night and about Brandi she refers to her as a firecracker….or maybe an atom bomb. Brittish tells Jackie about her plan to have a party with the ladies.

Jackie talks to Draya and Draya shares that she is in love and wants to get married because she’s sick of being a girlfriend. Draya thinks she’s all grown up now since she is wearing panties! Really?! Brandi and Jason are meeting a specialist to discuss fertility issues.

Jackie meets with Draya to talk about the party Brittish is planning and Jackie is encouraging her to go. There is a theme to the party and Draya is already not happy about following the plan.

Today at Brittish’s party, she is getting everything ready for the ladies. She wants them to experience some of the cultures she experienced when she was overseas with her fiancé. It is a Turkish tea party, but Jackie and Sundy, the first two to arrive, quickly note that they don’t really see the Turkish theme. Ariane arrives next. Draya walks in wearing next to nothing. No one seems to impressed. Malaysia and Brandi arrive and Brittish is already making her side remarks and is all bent out of shape because Brandi didn’t acknowledge her at her party. Brittish meets Malaysia for the first time. Of course, shortly after Brittish has to defend how tough and hard she is. When Draya calls her on what she said last week, Brittish is nervous but tries to play it off like it was no big deal and tells Draya to get past it.

Brandi opened another can of worms by bringing up the fact that she asked Sundy about her daughter. Sundy is anxious to share her feelings about it. Sundy accuses Brandi of stalking her after Brandi admits to Googling her. Brandi and Sundy get into it and are just yelling back and forth with Jackie, literally, in the middle…on the couch. Brittish chimes in and starts calling Brandi out for thinking she is better than everyone else.

As Brandi and Sundy decide to go talk their issues through elsewhere, Brittish obviously gets confused and thinks she is on Maury Povich or Jerry Springer and starts waving her little finger around and taking her shoes off. #trashy

Brittish starts something out of nothing and as she is taking her shoes off and coming at Brandi, everyone is getting upset and yelling. Brittish throws everyone out of her failed party. Next week we finally get to find out some dirt on Draya’s man so stay tuned and check back with CDL for the best recap if you miss the show!