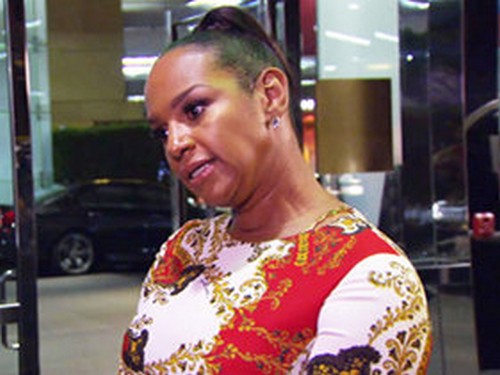 Tonight on VH1 BASKETBALL WIVES OF LA returns a whole new episode and on tonight’s episode, Draya corners her boyfriend about allegations of infidelity. Meanwhile, Jackie’s gala crumbles when her friends are no-shows and Brittish battles Malaysia.  Did you watch last week’s season 3 episode 3.  We did and we recapped it right here for you.

On last week’s episode things were getting serious with Draya and her boyfriend, Orlando Scandrick, but Jackie’s daughter had news that may rock Draya’s world. Meanwhile, Brittish’s fiancé Lorenzo Gordon got basketball and marital advice from Jackie’s husband, Doug Christie.

On tonight’s episode Draya confronts her boyfriend, Orlando Scandrick, about accusations of possible infidelity with Jackie’s daughter, Chantel. Jackie’s gala event falls apart when almost none of her friends show up to help, and adding to the drama, Brittish gets into an altercation with Malaysia.

We are back at the restaurant with Jackie spilling the beans to Draya about her boyfriend seeing Chantel. Draya tells Jackie it was her man’s best friend that was seeing Jackie’s daughter, not Orlando. She won’t believe Jackie, so Jackie shows her the text messages. The text messages are not too incriminating, but Draya confirms it is her man. She is visibly shaken, but trying to play it off and shoots down the texts as friendly conversation. Sundy is loving every minute of seeing Draya squirm and Draya doesn’t like it. Draya is still trying to question the whole thing and asks Jackie if she is sure it is the same Orlando. Draya leaves and Malaysia walks out with her. Sundy and Jackie stayed behind. Malaysia is upset that Jackie included her in this and doesn’t think Sundy had any nosiness being there either. Draya blows the whoel thing off, for now, as people just not being happy for her. Malaysia diplomatically tells Draya that she should bring it up to Orlando.

Jackie meets with Chantel and Doug. Jackie admits she told Doug abut Orlando texting Chantel. Chantel just shakes her head laughing off her mom’s dramatic ways. Jackie tells Chantel that she told Draya and that Draya is not mature enough to handle the whole thing.

Brittish and Sundy are walking and running a few errands when Sundy starts telling Brittish about the meeting with Draya. Brittish is quick to call Draya out for being “stupid.” Brittish says that Orlando will kiss up to Draya and buy her something and Draya will fall for everything. Big talk for someone who admits she knows her man probably “dibs and dabs.” Pot…meet kettle.

Ariane is trying to get the invites put together and needs some help from Malaysia. They meet up and Malaysia helps Ariane pick out invites for next week’s event! Ariane shares that she feels the pressure from Jackie because she hasn’t gotten much info. She calls Jackie later and shares that she lost the addresses that Jackie gave her. Jackie is upset but says she will send them again and the invites need to go out ASAP.

Today is the day that Draya breaks down and tells Orlando what she found out. Orlando looks super uncomfortable. Draya says that he better be honest because she can find out the truth. Orlando admits that Chantel has even been to their house! He admits he saw her for a couple days but didn’t like her, so he “passed her off to his friend.” Draya believes him because she says Chantel is not his type, because she is his type and they look very different. She tells Orlando that she has to be embarrassed with her friends now. When Draya says she is going back to Jackie to share what he told her, Orlando looks like he is ready to throw up.

Jackie gets to the venue. No Malaysia…and no gift bags. No decorations. No friends. Jackie is so upset. People are going to start arriving soon and Jackie is flipping out. Jackie’s PR Rep arrives and she tells him that he screwed up big time because she just found out that the venue that was supposed to be paid for/comped was not and they still owe money. He suffers her wrath big time. Sundy finally arrives and she goes right to work. Ariane shows up next ready to help. Sundy gives a big “I told you so” to Jackie about her other “so called friends” that are missing in action. Malaysia arrives and Jackie share show upset she is that she is so late. Malaysia counters that Jackie never gave her an early arrival time and she’s not happy about how Jackie is treating her and how Sundy, who doesn’t even know her, is acting towards her. She promises to get the bags ready ASAP, but plans to leave right after.

Meanwhile Jackie is complaining to Doug about no one doing their part and now there is no music! Brandi arrives and joins Ariane and Malaysia. Malaysia starts complaining about Jackie calling her so much and she and Brandi are basically saying Jackie was super annoying. Sundy walks up and Malaysia points out that she had an attitude with her when she arrived. Brandi tells Ariane that she must have failed at her job because no one is there. They should probably be thankful about that.

Brittish finally wobbles in. Seriously..she was wobbling. Not sure if her shoes were to tight, but something was wrong. Good thing she didn’t tip because she was busting out of her dress and could have had a major malfunction on the top. She came in giggling to Jackie about why she was late. Brittish is upset that Malaysia didn’t talk to her when she walked over. Of course, Brittish cannot hold her tongue and picks this event to ask Malaysia to talk to her about their personal beef. Great idea. Malaysia tries explaining herself but Brittish doesn’t believe her or give her the chance to continue and starts putting her hand in Malaysia’s face as if to silence her. She starts talking over her and hads her hand in Malaysia’s face and Malaysia starts pointing back. Brittish is acting childish getting all wild while she tries to keep her breasts in her dress. Brandi is in the middle trying to break it up. Jackie and security come over. Brittish tries to blame it on Malaysia and forgets to tell her fiancé that she is the one who started it. Her fiancé looks very embarrassed.

Next week should heat up even more. Join us here on CDL for another recap!