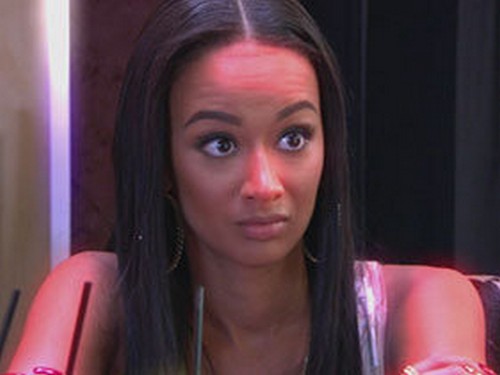 Tonight on VH1 BASKETBALL WIVES OF LA returns a whole new episode and on tonight’s episode,  a relationship heats up for Draya, but Jackie’s daughter delivers news that may upend Draya’s world. Elsewhere, Jackie’s husband gives advice to Brittish’s fiancé.  Did you watch last week’s season 3 episode 2.  We did and we recapped it right here for you.

On last week’s episode the last time these women got together, it was nothing short of a disaster, but Brittish was determined to give it another shot and threw a “Turkish Tea Party” for the group.  Meanwhile, Brandi’s time to have another baby was running out, so she and her husband Jason sought the help of a fertility specialist.

On tonight’s episode things are getting serious with Draya and her boyfriend, Orlando Scandrick, but Jackie’s daughter has news that may rock Draya’s world. Meanwhile, Brittish’s fiancé Lorenzo Gordon gets basketball and marital advice from Jackie’s husband, Doug Christie.

At the nail salon, after Sundy and Jackie tells Brittish her party was “off the hook” Brittish says she really enjoyed herself. The ladies tease her that she enjoyed kicking Brandi out of her house, to which she agreed and shared the many things she doesn’t like about Brandi. Sundy and Brittish decide that Brandi is insecure. They go on to bash her for not having a job or a career.

After Jackie asks about how the girls felt about Draya’s outfit, Sundy says it reminded her of when Draya was a dancer using the name Miami. Now Brittish knows the dirt on Draya. Sundy threatens to call her Miami next time she sees her.

Meanwhile, Draya, Malaysia, and Brandi talk about how horrible Brittish’s party was. Draya thinks she needs to grow up and Malaysia says she wanted to give her a good beat down. The ladies talk about how Brandi being elegant makes Brittish insecure. They all agree that they went to the party because they believe Jackie would be talking more about her event. They begin talking about how they are all doing work, but Jackie doesn’t seem to be doing much. They want it to be clear that they are not paying for the items they were put in charge of like food, gift bags, etc.

Draya took her son, Niko, to the park. She was talking to him about why she didn’t have him come to LA sooner. She wanted him to finish out the school year before coming. Draya asks about his feelings for Orlando and Niko says he does like him.

Jackie’s daughter Chantel is back from Seattle and she and Jackie are working on their relationship. Jackie proposes being her manager. Chantel says she doesn’t want Jackie to be her manager because she would rather have her as her mom only and keep that relationship intact. Jackie and Chantel sit down and continue to chat when Jackie asks Chantel if she is dating anyone. She says she was seeing someone but it was messy because he was seeing one of her mom’s friends! You guessed it…Chantel was involved with Orlando. Chantel explains that she never slept with him and that she didn’t know at the time he was with Draya. They were introduced and he started texting her. While nothing major happened, he was telling her things that led her to believe he was single. She has been in his house and he wanted to take it further with her.

Draya and Orlando are getting hot and heavy at home celebrating their anniversary. So Orlando tells Draya that he has something for her and he brings out a jewelry box. She gets all excited but tries playing it cool. She asks if she should have her mom or best friend around…just assuming a proposal is coming. She opens the box and it is…earrings! He tells her to slow things down and that while he believes in marriage, he is only 26. Calm down Draya! She has a bitter look on her face after that!

Jackie, back at home, tells hubby Doug about Chantel’s encounters with Draya’s man, Orlando. She swears Doug to secrecy since he is not supposed to know anyway.

Doug and Lorenzo have a good talk about marriage after Lorenzo seeks advice from Doug since he’s been married for 18 years. .

Malaysia and Draya are looking for candles for the gift bags but they have no idea who is paying. Malaysia calls Jackie and is told that she needs to donate the items and Malaysia is not pleased that she is getting stuck with paying. Jackie continues explaining on speaker phone, Draya overhears and says goodbye to Jackie and hangs up Malaysia’s phone.

Brittish and Lorenzo meet up with Jackie and Doug for dinner. Brittish is uncomfortable when the conversation shifts to sex so of course, she starts playing with her extensions.

Jackie and Sundy meet up and talk about the event’s progress. Jackie drops some hints about the news she heard. Doesn’t take long for her to spill it all to Sundy. Sundy wants to be there when Jackie confronts Draya about what she found out.

Draya, Malaysia, and Brandi meet up for drinks. Draya is ready to have some fun and admits she wants to see if Brandi can hang with her and Malaysia because they can drink! Draya tells the ladies that she and Orlando are still using condoms. She is letting it all out and tells them she is not above stalking her man either! Draya tells the girls she looks through all of Orlando’s things…email, phone, etc. and admits to being psycho. The ladies tell her that she has to just calm down and let things happen. They try to tell her that it isn’t worth it to stalk him and look through everything because her man could be cheating right under her nose. Draya asks if they’ve ever been cheated on and is shocked to hear both ladies readily admit their men have cheated. Draya feels even more insecure. They tell her to focus on developing a connection with him.

Jackie meets up with Draya. Sundy is there. Draya is getting antsy as she knows Jackie has something to tell her. She is wondering what Sundy is doing there and why Sundy is telling Jackie to just get it out and tell her what she knows about her. Malaysia is there too. Jackie finally gets out the Orlando was seeing her daughter. Draya doesn’t believe her, so Jackie counters that she has proof and holds up her phone. Cannot wait til next week!! Catch all the details here on CDL next Monday!