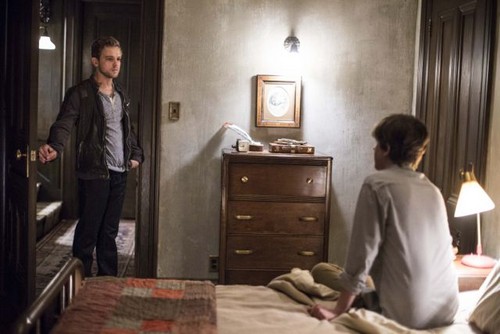 Bates Motel returns to A&E tonight with a brand new episode for fans to enjoy.  In“Check-Out”  Dylan questions his loyalty to Norma and Norman.

On the last episode of Bates Motel Norma met an ally in her battle to stop the bypass. Emma’s memorial for a friend led to a new relationship. Norman fell under the influence of someone that was completely unexpected.  Did you tune in for the last episode? If not then we recapped it right here so it’s easy to catch up on all of the details.

On tonight’s episode a new revelation forces Dylan to question his loyalty to Norman and Norman.  Christine brings Norma into the White Plains social scene.  Norman will grow “increasingly worried about Caleb’s presence in town.”

Tonight’s episode is going to be a great one and you’re not going to want to miss it. Tune in to A&E at 10PM EST to watch itand we’ll also be recapping it right here.  In the meantime stop by our comments section and tell us your thoughts on the second season of BATES MOTEL!

Tonight’s episode of Bates Motel begins with Emma waking up and running out of the motel room with her oxygen tank, having a coughing fit.  She finds Dylan passed out drunk in his truck, with vomit running down the side of his door.  He is still unconscious, so Emma runs and wakes up Norman and he helps her carry him into a bed.  Emma asks Norman a ton of questions, but Norman just snaps at her and says he “doesn’t know.”  Norma enters the motel room and kicks Emma and Norman out.  Dylan is still passed out on the bed, she covers him up with a blanket and stares at him a moment and then heads back outside.

Emma and Norman are waiting outside and Emma offers to stay and watch Dylan.  Norma heads to her car and Norman wants to come with her, she says “there is one thing she can do” and instructs him to stay with his brother.

Dylan wakes up in the motel room and Norman brings him breakfast and clean clothes.  Dylan asks him how long he has known “about all of this” and Norman reassures him he didn’t know until last night.  Dylan isn’t buying it, he says this “explains why he has always been on the outside of the family.”  Norman insists that who Dylan’s Father is doesn’t change anything.  Dylan doesn’t want to hear it, he kicks Norman out of the room.

Norman storms into the office and Emma demands that he tells her what happened.  Norman says he can’t talk about it, it is a family matter.

Dylan heads to the dock and runs into his Uncle/Dad Caleb, and reveals that he knows that Caleb raped his Mom.  Caleb insists that “it wasn’t like that.”  Dylan tells him he is his son, and Caleb says that isn’t possible and Norma got “knocked up by her husband.”  Caleb hands Dylan an envelope, and Dylan storms off.

Christine calls Norma and invites her to dinner at a restaurant called Green Tavern, Norma declines and says she isn’t feeling well and will go out with her another time.  Norma heads to her room and lays down.  Norman follows her and tries to comfort her.  He wants to know why she didn’t tell him the truth about Dylan’s Dad, he reassures her that she can tell him anything and lays down in bed with her.  Norma cries to him that she went to his motel to tell him to leave him and call him out for what he did to her, but she couldn’t do it, she wasn’t strong enough.  Norman comforts her and tells her “not to worry” and promises to take good care of her.

Later Norma is cleaning her kitchen, and her friend Christine arrives at her door unexpectedly and tells her she is not “taking no for an answer.”  She heads into Norma’s room and picks her out an outfit, she wants Norma to “get back out there.”  Christine has arranged a date for Norma named George, he will pick her up at 7:00.

Emma catches Norman in the office looking at other motels online, he says he is just “checking out the competition.”  Cody barges into the office furious, and wants to know why Norman was a “no show.”  She leaves her number so next time he can call her and tell her he is busy, and after she leaves Emma warns him that his Mom isn’t going to like it.

Later that night Norma gets dressed for her date, and Norman helps her get ready and encourages her to go out.  Dylan arrives at home, still upset, and Norma tells him he needs to “move on and put this behind him.”  Norma tells him the only reason Caleb came to town was to get money from him.  Dylan reveals that Caleb gave him back all the money he gave him.  Norma is shocked.  Her date arrives and she puts on a fake smile and heads out to dinner with George.

Norman goes to work on the set with Cody, he is clearly stressed and confesses to Cody that his Uncle is in town and he isn’t a good guy, he is abusive, and he won’t leave.  He is worried about his Mom.  Cody encourages him to “beat the guy and scare the crap out of him” and tells him he will leave his Mom alone afterward.

Cody drives Norman to the Kings Motel where Caleb is staying and gives him a tire iron, he tells her he has never done anything like this before, and Cody reassures him that the tire iron is his “super power.”  Cody walks him to Caleb’s door, and Norman freaks out and says he can’t do this and tells her they have to leave.  Cody agrees.

Sherriff Romero shows up at the docks and tells Zane it is time that he introduced himself, he reveals to Zane that a lot have changed since he left town.  Sherriff threatens him, and Zane laughs it off and offers him a bear.  Romero leaves.

George drives Norma home from their date and she sits down in the kitchen and proceeds to get drunk.  Dylan comes through with boxes, and says that he is moving out.  Dylan informs her that she “made this mess,” and Caleb denied raping her and getting her pregnant.  Norma explains it is because she never told him or anyone, that she was pregnant with his baby.

Cody drives Norman home, and he is still acting shaky.  He walks into the house and Norma and Dylan are fighting.  Dylan accuses Norma of “using him,” he says that he made her boyfriend think that he got her pregnant so that he would marry her and could move out of her parent’s house.  He thinks she should have just gotten an abortion and not brought him into the world.  Dylan storms out of the house and Norma chases after him crying, Norman hides in the shadows and watches their altercation.

At the Kings Motel Caleb is getting ready to check out and someone knocks on his door, it’s Norman, he introduces himself and Caleb tells him to get out.  Norman begins talking accusing Caleb of raping him and then says “I was your little sister you should have protected me.”  He pulls a knife out and tries to stab Caleb, Calebe throws him on the ground and walks out of the motel room.

Cody arrives at a store, and the woman says she had to call her because her number was on written on his arm.  Norman is sitting there in a trance, not talking or blinking an eye.  Cody takes him to her car and tells him “everything will be okay.”