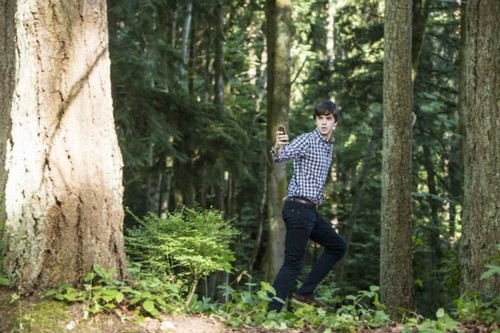 Tonight BATES MOTEL the series that was inspired by Alfred Hitchcock’s Psycho that focuses on the life of Norman Bates (Freddie Highmore) and his mother Norma (Vera Farmiga) airs with its second season.  On tonight’s episode called,  “Gone But Not Forgotten,” Norman struggles to cope with Miss Watson’s death.  If you want to get caught up before tonight’s premiere.  We have a recap of season 1’s finale, right here.

On last season’s finale Norma had a lot to deal with when the midnight deadline to give Jake his money came to an end.  Meanwhile, Mommie Dearest didn’t like that Norman took Emma to the prom, in fact she didn’t like when Norman decided to do normal teenager stuff in general. Romero took action.

On tonight’s season premiere Norman fixates on Miss Watson’s death; Norma worries about the future of the motel when plans for the bypass move ahead of schedule; Bradley is driven to extremes as she searches for her father’s killer.  In good news Big Love’s Chloë Sevigny will be joining the cast this season.

Tonight’s Bates Motel season 2 premiere is going to be a great one, and you won’t want to miss. So be sure to tune in for our live coverage of Bates Motel — tonight at 9PM EST! While you wait for our recap, hit the comments and let us know how excited you are about the new season?  Check out the sneak peek of tonight’s episode below!

RECAP: Norman is in bed, all of sudden he wakes up. The phone rings, Norma gets a call from the Principle and tells her that Ms. Watson was murdered and there will be no school on Monday. Norman gets up, he wants to know what is going on. Norma asks Norman what happened the night before when Mrs. Watson was supposed to give him a drive home. Norman says he doesn’t remember, he just remembers running home. Norman asks Norma why, she tells him that Mrs. Watson is dead and somebody killed her.

We are now at the funeral, it is raining, Norman is very upset; he cries at the service uncontrollably and people are staring at him. Norma tries to console Norman.

Later, at home, Norman is standing by the window and Norma tells him that he has to eat something. Norman says she was so kind, he can’t imagine why someone would want to hurt her. Norma tells him that he really didn’t know her or her life, Norman asks Norma who would do such a thing, she says it is not his problem. Norman is then seen twirling Ms. Watson’s pearls in his hand.

Bradley is in a car, she looks a wreck, we see the car swerve then stop on a bridge; she jumps off.

We are now four months later, Norma is dressed in a pretty dress, she has cut her hear and looks happy. Norma heads to the office to look for Norman but he is not there. Emma offers to go look for him, but Norma goes on her own. Norman is performing taxidermy on an animal when Norma finds him and she tells him to stop doing what he is doing and go serve some customers. Norma doesn’t like what Norman is doing, she tells him that he is spending too much time in the basement and needs to spend time with people.

In the office, Emma hands Norman a stack of letters that were returned from Bradley; looks like he sent them to her. Norman says he was just worried about Bradley after the accident, Emma gets angry and tells him it wasn’t an accident, she jumped off the bridge. Emma then tells Norman that Bradley is being released from the hospital, he says he is glad she is better.

We now see Bradley in the hospital, she is smoking a cigarette and her mom walks in.

In the kitchen, Dylan walks in and hands Norma a stack of money for rent, she says she doesn’t want it because she knows where he gets it.

Norma is in the car with Norman; they start to get into an argument over Norman’s driving. Norman takes Norma to Ms. Watson’s grave site; Norma gets upset and tells him to get over it, she was just his teacher and not a friend or a relative. Norma tells him it is not normal for him to be focusing so much on Ms. Watson’s death and dead animals. Norman gets frustrated and tells Norma to drive, they are going home.

Norma sees some construction workers, she stops the car and finds out they are there to work on the new bypass; a worker tells her they are going to break ground on Monday. Norma is upset, she thought she would have time to fight it, she tells Norman it is the road that is going to ruin their lives.

Norma is on her bed, on the computer. Norman walks in and she tells him that she has a meeting tomorrow to speak at a bypass meeting. Norma tells Norman that they have to fight this, he doesn’t look like he has much confidence in her being able to fight this. Norma reminds him that they made this motel is successful because of their hard work and they will fight this. Norman then says that he is going out, probably to the village.

Bradley goes to see Gil, who worked with her dad and asks who killed her father. He says he doesn’t know, then he invites her inside and says that he will tell her more; she decides to walk away and not take him up on his father.

Bradley is ten home and going through some of her father’s things. Bradley finds her father’s gun and points it at her face; she is startled when her mother knocks on the door and tells her that Norman is there to see her. Norman tells Bradley that he wrote to her every day, she says she knows. Bradley tells Norman that she is doing fine, Norman tells her that he heard she tried to kill herself and he thinks it must have been horrible to feel so isolated. Furthermore, he wants her to know that she can always speak to him, as a friend.

Norman is in bed now and he has the pearls on his hand again and is thinking about Ms. Watson; then we see her at her graves site, he sees a guy at her grave and start to take pictures of him.

Gil speaks to Dylan and tells him that he doesn’t like that Bradley came around asking him questions, if she continues he wants Dylan to take care of her. Dylan finds out that the reason Gil hated Gerry Martin so much was because he was sleeping with Ms. Watson.

Norman goes to see Sheriff Romero, he tells him he took pictures of a man beside Ms. Watson’s grave and thinks maybe this guy could have something to do with her death. Norman tells him that Ms. Watson was having an argument with a guy named Derick, this could be the guy. Sheriff Romero then asks Norman some questions, like does he go to her grave a lot and if he ever visited her house.

Norma is at the meeting, she proposes that they stop construction on the bypass. The meeting ends and Norma doesn’t make an headway, then she calls the city counsellor a dick and starts ranting, the meeting is still adjourned.

Bradley meets with Dylan, he tells her that he heard she talked to Gil and it wasn’t smart; he tells her to stay away from the whole operation. Bradley says she will stay away when she finds out who killed her dad. Dylan says that her father was sleeping with Ms. Watson and she was Gil’s girlfriend. Bradley asks Dylan why he didn’t answer any of her emails, he says that his brother likes her and there are certain lines you don’t cross.

Norma meets up with Sheriff Romero in town; he tells her that Norman went to see him and gave him a photo of a man at Ms. Watson’s grave. Norma tells him that Ms. Watson was his adviser and he really cared about her. They both agree that Norman has to get over his obsession with Ms. Watson.

Norma heads home and confronts Norman; she tells him that it needs to stop, he is obsessed with Ms. Watson’s death and she wants to know why. Norman tells Norma that he went to Ms. Watson’s house the night she was killed. Norman tells Norma that he went to Ms. Watson’s house and it felt weird like she was attracted to him, it felt wrong, but no wrong. Norman says he didn’t sleep with her, she went and changed, left her door open and he could see her. Norman says he got scared, then he doesn’t remember, he felt faint and then remembers running home. Norman says he feels guilty because if he didn’t leave maybe he could have helped her. Norma asks him why he left, he says he doesn’t know. Norma tells him that she tried to seduce him and he ran away because he knew it was wrong and he is a good boy.

Gil is in the kitchen, the doorbell rings, it is Bradley; she asks him if she can come inside. Gil offers her a drink and asks if she thought about their little talk, she says that she has and needs to know more about her dad. Bradley starts coming on to Gil, then asks him if that is what he wanted; he says so far so good. Gil goes to sit on the couch, Bradley tells him that it is not easy being a girl without a daddy. Bradley then sits on top of Gil and says that she needs to know more, about how he was sleeping with Ms. Watson. Gil tells her to remove her sweater, she does and then unbuttons his shirt. Bradley the reaches down and grabs her father’s gun, she shoots Gil right in the head.

Norman is woken up by Bradley, she is in his bedroom and asks if he meant what he said that he would be there for her because now more than ever she needs him.