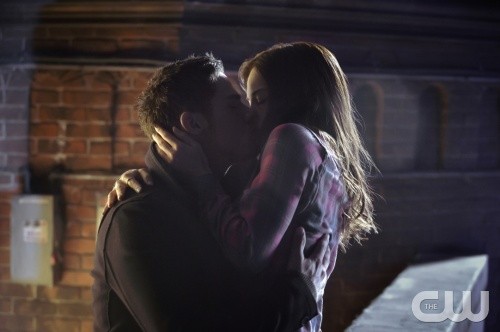 Tonight on the CW their hit fantasy drama BEAUTY AND THE BEAST airs with a new episode called, “Cold Case.” On tonight’s episode Gabe suspends Cat and Tess in an attempt to force Vincent out of hiding. Meanwhile, Cat’s sister drops by for a surprise visit.

On the last episode, when Vincent (Jay Ryan) became the subject of a city-wide manhunt, he and Cat (Kristin Kreuk) tried to stay below the radar. They found a surprising ally when the FBI approached them about helping on an important case. Sendhil Ramamurthy, Nina Lisandrello and Austin Basis also star. Jeff Renfroe directed the episode with the story by Amy Van Curen and the teleplay by Brad Kern.Did you watch the last episode? If you missed it we have a full and detailed recap, right here for you.

Tonight’s episode looks like it is going to be great and you won’t want to miss it, so be sure to tune in for our live coverage of CW’s Beauty and The Beast at 9:00 PM EST! While you wait for our recap hit the comments and let us know how excited you about the show, so far! Also, check out a sneak peek of tonight’s episode below!

Tonight’s episode begins with Cat getting some help from Tess to elude those after her. She gets home and starts gathering some items when her sister Heather surprises her. Cat makes up an excuse to get up to the roof where Vincent is waiting. Cat runs out after getting a call and promises Heather she’ll hurry back. She heads to the station where she is summoned by the Captain and Gabe for a brief meeting. They tell Cat they know she was onto them tailing her and they know Tess helped her lose them. They tell her they know she is helping to hide Vincent and remind her that it is illegal to harbor a fugitive.

Gabe is questioned by the Captain about his relationship with Cat and whether or not his actions are a result of his feelings for her. He, of course, refutes any possibility of making decisions based on his feelings. Shortly after, Heather comes to the station looking for Cat and is told by Gabe that she was suspended. She asks why but Gabe says he is not at liberty to share. Meanwhile, Cat and Vincent are working fast as Cat searches the government database that she still has access to.

They review past murders that were supposedly the result of “The Beast,” but finally her access is denied right in the process of looking through the cold case files. The Captain calls Gabe to let him know what Cat was up to and he shares the name of a man, Ray Sheckman, they looked up who is definitely of interest to Gabe as he has met him in his past. Gabe becomes concerned but doesn’t let on and quickly ends the call.

Cat meets up with Vincent again while Tess, meanwhile, meets with Heather for coffee. Heather inquires about why Cat is avoiding her and Tess ends up putting her foot in her mouth when she says that Cat is busy working on some cases because Heather already knows that Cat was suspended. She calls Tess on it and Tess has no choice but to tell her what is really going on. Heather is so upset, that she walks out on Tess.

Gabe gets very dirty when he calls the brother of murder victim Ray Sheckman. He tells his brother that even though the police is not investigating the death, he knows who the murdered is and he wants to tell him so he can take action. Too bad Gabe is trying to keep his part in the murder quiet while he blames Vincent so that he will become the new target.

Cat and Vincent are still working to uncover the truth and are plotting and walking when they run into Heather.
Heather sees the couple together and runs off with Cat chasing after. Cat catches up to Heather and they sit down for a talk. Cat opens up a bit after Heather tells he she needs the truth. After Cat opens up and tells Heather the truth about Vincent, she gets up and storms off thinking that the story is way too far-fetched to be true.

Gabe goes to see Ray’s brother to try to work a deal but he says without proof, he is not buying it and has too much to risk to go after Vincent. Gabe gives some more details which include a woman who can tie Vincent to the murder. When the brother asks for the name, Gabe is hesitant. He keeps pressing and Gabe shares Cat’s name.

Cat pays a visit to a man who witnessed Ray’s death by the hands of Gabe. Cat begs him to be honest and help them catch the man who did this. So they can clear Vincent’s name. As Cat and Vincent talk afterwards, Cat receives a call from Heather who has been kidnapped by Ray’s brother. He gets on the line and demands that if Cat wants her sister safe, she needs to bring Vincent to him.

Cat tells Vincent about the call. They know Heather was trying on wedding dresses when she was taken, and when Vincent spots her veil that she lost during the abduction, he has a vision and knows just where to find her.

He comes to save her and is closed intot he cell where she is being held. Ray’s brother tells him he knows he is the one who murdered his brother and now he has to die. He has a bomb set to go off in minutes. Vincent begs him to believe that he is not the murdered. He asks the man to let Heather go as she is innocent in all of this. He says he wants no witnesses and leaves them to die. Vincent gives Heather a warning and then uses his beastly strength to break them free.

Things really heat up when the Captain escorts Gabe into a line up after he’s been named a suspect in a murder investigation. The witness Cat found was at the station with Tess. Cat and Vincent share a brief, but passionate moment in the rooftop before he takes off. Meanwhile, Gabe pays a visit to the witness who identified him in the lineup and planned to scare him into retracting his statement. When the man yells for help, Gabe becomes enraged and ends up murdering him.

We have only two episodes left before the finale, so don’t miss a single recap! What do you think about the direction of the storyline? Tell us below!