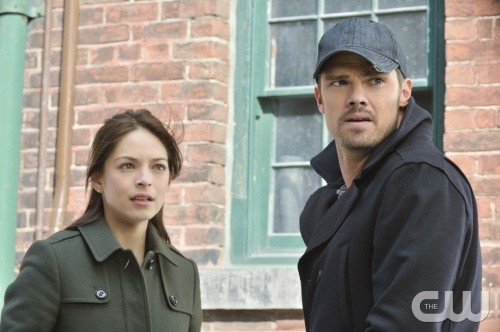 Tonight on the CW their hit fantasy drama BEAUTY AND THE BEAST airs with a new episode called, “Cat and Mouse.” On tonight’s episode Vincent and Cat form an unexpected alliance with the FBI.

On the last episode, after Vincent (Jay Ryan) was arrested for murder, Cat (Kristin Kreuk) and the team had to work together at all costs to clear Vincent’s name; they discovered who turned Vincent in, they realized they had a bigger enemy to handle. Sendhil Ramamurthy, Nina Lisandrello and Austin Basis also starred. Fred Gerber directed the episode written by Sherri Cooper and Jennifer Levin.  Did you watch the last episode?  If you missed it we have a full and detailed recap, right here for you.

On tonight’s episode when Vincent (Jay Ryan) becomes the subject of a city-wide manhunt, he and Cat (Kristin Kreuk) try to stay below the radar. They find a surprising ally when the FBI approaches them about helping on an important case. Sendhil Ramamurthy, Nina Lisandrello and Austin Basis also star. Jeff Renfroe directed the episode with the story by Amy Van Curen and the teleplay by Brad Kern.

Tonight’s episode looks like it is going to be great and you won’t want to miss it, so be sure to tune in for our live coverage of CW’s Beauty and The Beast at 9:00 PM EST! While you wait for our recap hit the comments and let us know how excited you about the show, so far! Also check out a sneak peek of tonight’s episode below!

Tonight’s episode begins with Tess rushing in to JT’s apartment telling him they need to go look for Vincent, and Cat since they are both missing. At first, JT is hesitant thinking that Vincent and Cat ran away together. He also thinks there is no chance of finding him. Tess pushes him to get up and moving and he remembers talking about a rendezvous point that Vincent may have gone to. They head out to check. Thankfully, they find Vincent there incognito, waiting. Tess shares that Cat is missing and Vincent is upset and wants to go find her. They devise a plan.

Meanwhile, Gabe has all his men on the case to find Vincent. He notices Cat hasn’t showed up for work and says he will look for her. They are at Cat’s apartment searching for clues when JT shows up. When he refuses to divulge Vincent’s location, Gabe has him arrested. It was meant to be a diversion, but it didn’t work because Gabe was hiding in the apartment and surprises Vincent when he thinks he is alone. He pulls a gun on Vincent and Vincent tells him he doesn’t have time for this as he needs to save Cat. He asks Gabe if he was the one to rat him out and Gabe admits to doing so. Vincent throws him against the wall and holds him by his neck telling him how he’s ruined his life and Cat’s life. Gabe basically tells him he did what he had to. Vincent gets away again.

Back at the station, Gabe goes off on JT first, then Tess. He is upset about their involvement and trying to protect Vincent. He tells Tess she needs to do her job and put personal feelings aside. Meanwhile, Cat finds out her captors are FBI and they need her help. When she doesn’t want to help and is uncooperative, they ask her to help as they may be able to get Vincent exonerated. Vincent and JT break into Gabe’s apartment.

Vincent takes off to look for Cat and uses his mental abilities to try to find her. Her captors come back to the room where they have her held and she knocks one out with a chair, and the other gets a kick to the face. She runs out and into Vincent as he has finally located her. They take off to get out of there ASAP. Though JT tries to warn them, Gabe and his team locate the couple through surveillance. They find a hideaway spot and Vincent tells Cat he may not want to stay on the run. She tells him he has to hang in there and she knows they can help him and get out of this mess. She knows they will be together one day.

Cat and Tess talk on the phone. Cat asks Tess to help them navigate around the surveillance. Tess begins to have second thoughts and wishes Cat would as well. A few moments later, JT has the TV on and Gabe can be heard rallying his troops and promising to find fugitive Vincent. JT is upset to see Tess in the background as if to show support of Gabe’s plan. Vincent again tells Cat he is done running. Moments later, Cat arrives back at the room where she was held hostage. She apologizes to her captor and has Vincent with her. The FBI agent shares that he was told they can help because of Vincent’s tracking abilities. He needs them to break into the UN to save their agent who was taken. He agrees to get the exoneration in writing per Cat’s demand…before they go through with this mission.

Back at the station, Tess seems to give up Vincent’s location, telling Gabe she sees him on the monitor. Gabe comes to look and sees Vincent. They determine the location and send several units out. Tess didn’t let her friends down, however. It was a set-up to throw Gabe off track. When Gabe and the other units arrive, they find a homeless man dress in the same clothes Vincent was wearing. JT calls Tess to thank her.

Once inside at the UN, Vincent and Cat make their way in and Cat has to fight her way down a hallway as two men approach her. She makes it through and finds the agent. She helps her escape to safety and Vincent holds up a garage door that begins coming down when an alarm goes off. The agent manages to get under in time, but Cat and Vincent are stuck! Cat wants Vincent to run, but he refuses to leave without her. They need to get on American soil. The entire place is now on lockdown mode. Their only escape is to break through a window and jump into a river. Cat is hesitant but Vincent tells her it is their only way out. When they make it back to the agent to get the exoneration for saving Agent Malory, they are told the deal was rescinded because “someone” blocked it after a call to the DA. Knowing the “someone” is Gabe, Cat goes to see him and goes off on him, blasting him for going after Vincent when he knows he is innocent. She storms out and is back in the arms of Vincent shortly after.

Another nail-biting episode is set for next week, so be sure to meet us back here for a full recap!