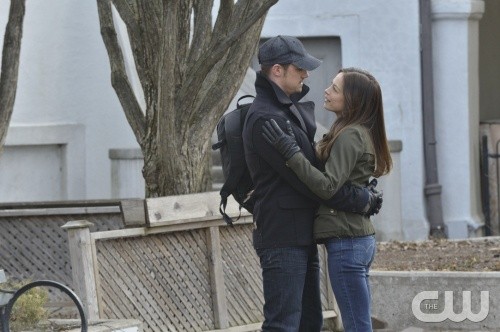 Tonight on the CW their hit fantasy drama BEAUTY AND THE BEAST airs with a new episode called, “Ever After.” On tonight’s episode Cat and Vincent seek a normal life.

On the last episode, Cat’s (Kristin Kreuk) sister Heather (guest star Nicole Gale Anderson) dropped by for a surprise visit at the worst possible time, just as Gabe (Sendhil Ramamurthy) suspended Cat and Tess (Nina Lisandrello) from the squad in an effort to force Vincent (Jay Ryan) out of hiding. Austin Basis also starred. Rich Newey directed the episode written by John A. Norris and Eric Tuchman.  Did you watch last week’s episode?  If you missed it we have a full and detailed recap, right here for you.

On tonight’s episode Cat (Kristin Kreuk) and Vincent (Jay Ryan) take Agent Knox’s (guest star Anthony Ruivivar) offer to extricate and try to lead normal lives — but forces out of their control conspire to expose them and drag them back into the fray. Sendhil Ramamurthy, Nina Lisandrello and Austin Basis also star. Steven A. Adelson directed the episode written by Vanessa Rojas.

Tonight’s episode looks like it is going to be great and you won’t want to miss it, so be sure to tune in for our live coverage of CW’s Beauty and The Beast at 9:00 PM EST! While you wait for our recap hit the comments and let us know how excited you are about the show, so far! Also, check out a sneak peek of tonight’s episode below!

Tonight’s episode begins with Cat feeling someone coming up behind her while she’s focused on a bird. She turns and grabs the arm of the unknown assailant and flips him to the ground. Problem is…it was her love, Vincent. After an apology and kiss the two discuss plans but are interrupted when Cat gets a call from Tess letting her know the witness is missing. Tess lets Cat know what she is doing on her end and gives her and Vincent the job of trying to track down the witness as she goes to find Gabe.

Tess arrives at Gabe’s place. Initially he is happy to see her and starts blabbing about how he is not responsible for Heather’s kidnapping. She cuts him off as two officers walk in behind her and arrest him for the disappearance of the witness. He protests but is taken in regardless. Meanwhile, Cat and Vincent head to the home of the witness. Vincent gets a vision that the witness was killed by Gabe.

He knows there is a blood trail so they need to track it. At the station, Gabe is adamant that Vincent is trying to set him up and Tess is helping because Cat is her best friend. He says he has no reason whatsoever to go after the witness and knows nothing about his disappearance. Tess reminds the Captain that Gabe was picked from the lineup. Gabe maintains his innocence and puts Tess and the Captain to the test by challenging to prove their case.

Vincent gets a vision as he is walking through crowds and traffic and knows where the body is. Just as he tells Cat he knows the location and they begin to take off, a pedestrian on the street spots Vincent and yells “There’s the fugitive from TV!” Cat tells Vincent to run as two officers on horses approach. They meet up and head to the FBI and speak to the agent who they helped recently. He reminds them they must lay low. Cat tells him they cannot because they have no place to go where they are not noticed. The agent offers a witness relocation program.

This will give him enough time to try to help them by continuing to work on the case. They are open to the idea. They later share the idea with Tess and JT are not thrilled about not seeing their friends for a while, but they understand. Gabe is hot on their trail after getting released and asks some witnesses where they saw the couple run. Gabe gets into Cat’s place and looks around. He asks a neighbor about her and she says she is not sure where she is but informs him that she asked her to pick up her mail through the end of the month.

Cat and Vincent head over to their new suburban home and try to adjust to a completely new life. ”Veronica” and “Tim” make themselves comfortable in their nice new home, but Cat has a difficult time becoming someone new and breaking her old habits. Vincent meets a new neighbor as he unpacks. Frank and April come over and chat for a bit and April looks at Vincent and mentions he looks familiar. This puts Vincent on alert and he gets a little paranoid.

Tess comes over and sees JT’s cell phone map which has tracked Gabe’s cell phone. He explains how he tracked Gabe and where he thinks he is…at the dungeon. Tess is quite impressed and the two head out to see if they can find him or proof the witness has been murdered. Meanwhile, Vincent is paranoid when he sees police across the street and he tells Cat he’s worried they are looking for him. Cat blows it off and thinks the officer is there for another reason.

Just then, they hear two gunshots. They head outside as the other neighbors do and see their new acquaintance, Frank has been shot and his wife is oon the ground next to him. She yells at the office for shooting him. The next morning, Cat is dying to go outside and get the details because something seems off. Vincent begs her not to as he is worried she will blow their cover.

She cannot listen and eavesdrops on the officer and detective talking about the case. She joins the conversation and asks questions of the officer, but they ask her to back off. Vincent comes running out after her pretending they have another obligation so he can get her out of there. Cat is convinced there is something strange going on and believe April has something to do with her husband’s death.

Meanwhile, JT and Tess find a clue they can use to prove Gabe murdered the witness. Just as they set out to leave, Gabe appears with a gun in hand and Gabe and Tess both hold guns to one another. He tells them he wants to know where Vincent is. Meanwhile, Cat heads over to the station in her new town and talks with the officer who shot Frank. She raises his suspicions by bringing up her concerns about April. While Cat is busy with the officer, Vincent goes across the street and boldly asks April if she had her husband killed. She is shocked by his question, but he uses his special abilities to determine Cat was right.

Cat and the officer talk about April and Cat notes the officer isn’t wearing his vest which he was conveniently wearing the night before. She also notes that he knew when April met the new couple. When the officer realizes Cat is c on to his lies, he tries to grab his baton to use against her but she is too fast for him and a struggle in the car ensues. The patrol car hits into a tree and Cat runs off into the woods. She hides behind a tree but can see the officer looking for her with a gun in his hand.

Cat runs to the patrol car to get a gun out of the back and the officer sees her and begins shooting at her. Just then, Vincent runs up and lifts and throws the officer onto the car windshield. Tess gives JT a pep talk after he shares how down he is for not protecting him from Gabe. Tess tells him that at least they found where Gabe took the body.

She tells JT that Vincent and Cat are back in town because of what happened while in their new town. In the last scene, Vincent and Cat are back in the city and enjoying a walk when Vincent tells Cat how he is not upset that she couldn’t give up her desire to play detective in their new town because it is just who she is and he wouldn’t want to change anything. The two kiss and walk off with a hope for a better day tomorrow.

What did you think of tonight’s episode? Will Cat and Vincent ever find peace? Weight in below!