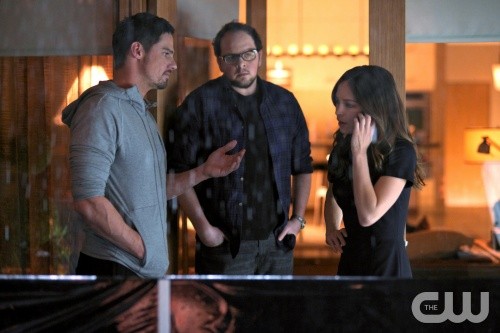 Tonight on the CW their hit fantasy drama BEAUTY AND THE BEAST airs with a new episode called, “Operation Fake Date.” On tonight’s episode Gabe tries to woo Cat by taking her on a romantic date.

On the last episode, Cat (Kristin Kreuk) and Vincent (Jay Ryan) took Agent Knox’s (guest star Anthony Ruivivar) offer to extricate and try to lead normal lives — but forced out of their control conspired to expose them and drag them back into the fray. Sendhil Ramamurthy, Nina Lisandrello and Austin Basis also starred. Steven A. Adelson directed the episode written by Vanessa Rojas. Did you watch the last episode? If you missed it we have a full and detailed recap, right here for you.

On tonight’s episode desperate to start over with Cat (Kristin Kreuk), Gabe (Sendhil Ramamurthy) tries to woo her by taking her on a romantic date. However, she has plans of her own regarding how to save Vincent (Jay Ryan) – while also trying to plan Heather’s (guest star Nicole Gale Anderson) bachelorette party. Nina Lisandrello and Austin Basis also star. Fred Gerber directed the episode written by Sherri Cooper and Jennifer Levin.

Tonight’s episode looks like it is going to be great and you won’t want to miss it, so be sure to tune in for our live coverage of CW’s Beauty and The Beast at 9:00 PM EST! While you wait for our recap hit the comments and let us know how excited you are about the show, so far! Also, check out a sneak peek of tonight’s episode below!

Tonight’s episode begins with Vincent and Cat going incognito to meet up with Knox. On the way Vincent is complaining about the lifestyle they have to live for now and for what he is putting Cat through. Knox isn’t happy about what happened when they were living in the suburban neighborhood as part of the witness protection program, so he tells them the only chance they have now is for Vincent to turn himself in. he is trying to smooth things over and find a way to get Vincent exonerated, but for now, this is the best option and will allow him to continue working on the case to get him freed.

Tess and JT are shopping at an adult store to find items for Heather’s bachelorette party. While there, they are approached by a reporter who wants to know about Vincent’s super-powered DNA. The reporter is Beth, Cat’s old friend. She seems to have been stalking Tess and finally catches up with her. She tries to get them to collaborate. She tells Tess that she knows that she saw something strange the night at Catherine’s. Tess tells her she knows her source is Gabe and that he is just using her. They tell her if she wants information, she needs to figure it out herself because they are not helping her.

Tess and JT go back to Vincent and Cat to tell them what is going on. Cat tries to come up with a good solution. She tells Vincent she will have to go see Gabe alone. Vincent is not happy about it and tells her it seems like she is a little too happy to see Gabe. She explains she needs to do this so they can play their cards right. Cat goes to see him and plays it cool, as if she is not mad at him. Cat encourages Gabe to call off Beth. She tells him what Vincent is feeling and tries to get him to feel as though it will be a win-win.

Gabe tells Cat that he just wants a chance with her…a real chance and tells her that if she goes out on a date with him and is open to the opportunity of taking him back. If she does, he will give her what she wants. She agrees, knowing this is the only way she’ll get what they want from him. She goes back to tell Vincent and, understandably, he flips out. Cat tries to convince him of how this can help their plan. Cat comes up with a plan to keep Vincent busy while she is out on her date from hell. She recruits Heather to help Vincent write the speech for his press conference, which he’ll need once he turns himself in.

Vincent gets frustrated as they work because he is burning up inside knowing Cat is out with Gabe. He tries to take off but JT, who is there with Tess, stops him in his tracks and tells him to bring it back because he is not going anywhere. Meanwhile, Cat and Gabe are on their date and Gabe keeps trying to get in Cat’s good graces again. While Cat is not buying it, Gabe continues to open up and tries to be as genuine as possible when he swears that everything he did, he did out of love for her.

They continue their date after things are not as tense. Afterwards, Gabe kisses her goodnight. Everyone is waiting in Cat’s apartment to hear all the details. Gabe seems smug about the whole thing as his driver takes off. He notices that Cat left the mini cake she made on their date in the box he had. He tells the driver to turn around as he goes back to deliver it to her. As he approaches the door, he hears the group talking about the date and how Cat played things a certain way to get Gabe to trust her.

Vincent is at his press conference and is asked about his DNA by Beth, who is in the audience. Knox steps in to stop the press conference. Cat and Vincent talk for a moment after everyone is gone and Knox comes to speak with them about the reporter issue. Vincent admits yo Knox that everything the reporter asked about is true. Knox freaks out upon learning many new details that he wished he’d known before and tells the couple that he is very much out on a limb now. Cat talks Knox into going along with their plan, telling him that Vincent’s powers can be an asset to him, and he agrees but makes Vincent promises there is to be no breaking out. Vincent makes Cat promise not to see Gabe. She agrees and tells Knox she’ll find a way to get Beth out of their hair.

Cat is at Heather’s party when she gets a call that Vincent has escaped. Cat tells Knox that it cannot be true, but he says he called to check on him and he was not there. Cat knows something is up and that Gabe must be involved. He is the one who made Beth go to the press conference after hearing the group talking about how they were playing him.

Vincent is being tested in a lab as he is asked to run on a treadmill as he is being tested to see if he has special abilities. He tries to keep things calm and is barely trying as he runs the treadmill. Cat goes to see Gabe in an attempt to find Vincent. Gabe tells her he doesn’t know anything about his whereabouts. He tries to explain that she is not safe with Vincent. He knows how unsafe it is to have a beast in your life, just like Rebecca. He gets pushy with her and Cat pushes him off. That gets him extremely mad and gets a strong hold on her. She responds with a few kicks and punches of her own.

She knocks him out and gets nervous when he doesn’t respond. Meanwhile, Vincent’s beast comes to life when he is pushed to perform. As he runs out in an attempt to escape, the men run after him and he is knocked out. When he awakens, he is on a gurney and told that it is a government program that pulled him for the testing. He makes a proposition to them to let him go. They will know where he is at, back in prison, and he will not say a word about what happened. He says he’ll have a perfect alibi and everything will remain classified.

Vincent rushes to meet up with Cat, who is attempting to administer CPR on Gabe. She explains what happened and Vincent jumps in to help. JT arrives as well, in response to a call from Cat. Vincent seems to know what is wrong with him and is able to save his life. Meanwhile, at Heather’s, everyone is gone except Heather, Tess, and Beth. Beth tells Tess that she was right about Gabe. Cat and Vincent talk and Cat gets filled in on what happened with Vincent’s prison vacation.

Knox calls Vincent with some good news. He has been exonerated on all charges. Knox tells him the men who signed him out of prison must be very high level and are responsible for helping him. Vincent must go see them, so Cat says she will take care of everything in his absence. JT offers to help. JT and Cat go back in to see Gabe and wrap his hand. Cat tells him that Vincent has been exonerated and he better leave them alone and not do anything to try to expose him or she will go after him and Heather will come forward about the kidnapping and press charges against him. Gabe sits without saying a word, knowing he doesn’t have any choice.

Vincent and Knox arrive at the location where the men had taken him, but they are completely gone. Vincent starts having flashbacks and sees them taking his blood and tells Knox…they got what they wanted from him. Back at Gabe’s place JT and Tess check in on him after he seems very quiet. He is in the bathroom and beasts out, running through two glass doors to escape. Meanwhile, Vincent and Cat share a tender moment, finally relaxed knowing they are not on the run. Beth is waiting for Gabe after they apparently set up a meeting. She tells him she is not going to help him and after he is talking normally to her, he turns into the beast seconds later and rips her heart out.

This is really heating up now! Tell us what you thought if tonight’s episode below!