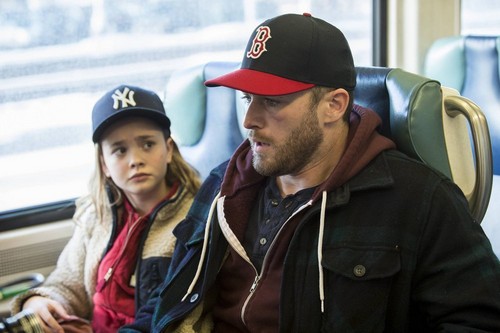 NBC’s brand new series BELIEVE hit the ground running last week with its’ pilot episode. the show is about a girl named Bo who has gifts. Levitation, telekinesis, the ability to control nature, see the future … since she was born, Bo (Johnny Sequoyah) has had gifts she could neither fully understand nor control. But now that she is 10 years old, her powers have become stronger and the threat from malevolent forces that would use her abilities to control the world has grown more dangerous.

With her life and future in jeopardy, Bo’s protector, Milton Winter (Delroy Lindo, “The Chicago Code”), turns to an unlikely source to keep her safe — Tate (Jake McLaughlin, “Crash”), a wrongfully imprisoned death row inmate who’s lost his will. On tonight’s episode, “Beginner’s Luck” with Skouras and the FBI hot on their trail, Bo and Tate will land in Atlantic City, where Bo bonds with a struggling mother and her ill child.

On the first episode we learned that now that Bo is 10, her powers have become stronger and the threat from malevolent forces that would use her abilities to control the world has grown more dangerous. With her life and future in jeopardy, Bo’s protectors turned to an unlikely source to keep her safe – Tate (Jake McLaughlin), a wrongfully imprisoned death row inmate who’s lost his will. Tate and Bo began an extraordinary journey, changing the lives of everyone they meet as they keep moving to stay one step ahead of the sinister forces after Bo’s power. Do you watch last week’s recap of the pilot episode? If not then we have you covered with a detailed recap of all the action right here.

If the pilot episode was any indication, then tonight’s episode of BELIEVE is one that you won’t want to miss and we’ll be recapping it live right here. While you’re waiting for our updates you can hit up the comments and let us know what you think of Bo so far!

The episode starts with Bo and Tate on the bus where they are trying to sleep. While they are on the bus, a police car comes and pulls the bus over. They enter the bus and ask all of the passengers if they have seen this man. They show the picture and it is a picture of Tate. Before they get to Bo and Tate’s row, Bo uses her powers to get the police car to start moving backwards. The cop sees his car moving and runs off of the bus. They then exit the bus at a stop where two cops are actively looking for Tate. Tate grabs someone’s luggage, grabs Bo, and decides to lock themselves in one of the bathrooms until the next day. Meanwhile Winter, Channing, and the other people helping are trying to devise a plan to keep Bo safe and out of danger. They are trying to set up escape houses every couple of days so they do not get caught. Back at the CIA agency, the detective is trying to find information about where Tate is, when she gets called into her superior’s office. He tells her about Tate and that she has a girl named Bo who is special. He sends the detective to Mr. Scouro who is a genetic guru who deals with people who have telekinetic powers. She arrives at his facility where she witnesses a kid who builds a lego lion along with a lion made of the bricks outside without touching them. She also learns that Mr. Scouro only cares about getting Bo back and does not care about what happens to Tate at all.

The episode picks back up with the CIA agents learning that Bo and Tate were spotted getting off of a bus at Atlantic City. It then shifts to Dr. Scouro who talks to two people who he wants to help him rescue Bo. They said that they have a guy named Marcus who would be perfect for the job and would do everything to get Bo back to the genetic center safely. Next, Tate and Bo are walking and talking about Bo’s powers when he realizes that they could be put to good use. He takes her to a casino where he has her use her powers to make a seven roll up on the dice every time. Meanwhile back at the CIA agency, they issue an amber alert to get Bo’s name and face out there so they can find her.

Meanwhile back at the casino, Tate puts money on the seven at the craps table; a seven comes up and he parlays it and puts more money on the seven. Bo is sitting across from him at a restaurant where she meets the waiter who gives her a vanilla milkshake. The waiter is freaked out when Bo knows everything about her son: his name, how old he is, and even that he is really sick. While this is going on, Winter and Channing are arguing over the amber alert and whether or not they should tell Tate that Bo is his daughter. Channing thinks that this piece of information would force him to care for Bo in a more comprehensive way. The action then swings over to Scouros and the CIA agent who argue over the amber alert. He feels that the amber alert will force her to be known by the public and make her grow up normal without his supervision, while the agent just wants to capture Bo and Tate and then decide what to do.

The episode returns with both Scouros and the CIA Agent getting information on who has last seen Bo and Tate. Meanwhile Bo and Tate are on the run, when Bo sees the waiter driving on the road. She stops and Bo asks her if they can ride with her. They then decided to go to Bo’s house for a while because the police were after them. When they arrived at her house they meet her son Jesse who has leukemia and needs a bone marrow transplant in order to survive. While in Jesse’s room Bo makes his favorite stuffed elephant fly around the room in a display of her powers that was quite magical. The waiter then takes Bo and Tate to the train station where they say goodbye. Meanwhile back at the casino, Marcus the man hired by the mercenaries beat up the casino dealer until he departed some information about Tate by saying that he said something about Philly. Back on the train, Bo tells Tate that she gave the money that Tate won at the casino to Jesse so he could get his surgery. Tate is distraught, but his sadness is interrupted by a lady who stops him and says that she knows that Bo is the girl on the amber alert. Everyone on the train then becomes alerted, and Bo and Tate must escape before anyone does anything to either of them. Bo and Tate are then chased down the train and are running for their own safety. Meanwhile back at the train station, the CIA are now on the scene and are interviewing people about Bo and Tate, what they saw and where they might be. Marcus is there and hears all of this. Back at the genetic house, Scouros is looking at footage of Bo and Winter and starts crying about possibly never being able to get her back and what they are going to do to her.

While Bo and Tate are driving after they stole a car, Bo says that she has to pee. So they make a stop at the gas station. While Bo is using the restroom, Marcus arrives and starts to beat Tate up and knocks him to the ground and puts gasoline all over the ground. Marcus then runs grabs Bo puts her in his car and lights a match to the gasoline. When he is about to leave, Tate enters and starts to fight with him. When Bo is able to open Marcus’s door and he falls out, Tate is then able to get control of the car and speed away before the flame hits the gasoline. Marcus then gets into another car and continues to try to track her down.

Meanwhile on their way to Philly, Bo and Tate experience a flat tire with their car and decide to get out to fix it when the police show up and ask Tate to put his hands around his head. Tate gets arrested and the police take the girl. Marcus drives by and tells Scouro that the police have Bo and this makes Scouro happy because he has a big chance of getting her back now. However, what they did not realize that the two police officers happened to be Channing and Winter so Bo and Tater are safe and are taken to an alternative location. Bo and Winter have a little reunion at the apartment they were brought too and it reminds us of how much love these two have for each other. The episode ends with the waiter and her son Jesse. Jesse shows her mom what Bo gave her (the money). The waiter is in complete shock and falls to the ground out of happiness.