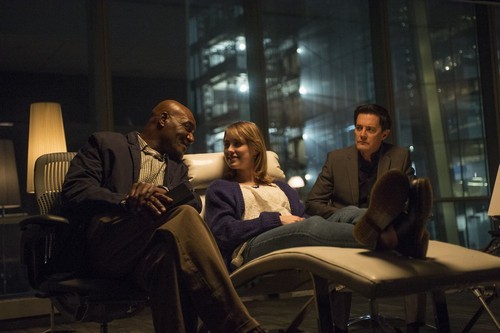 NBC’s brand new series BELIEVE hit the ground running and is getting better each week.  The show is about a girl named Bo who has gifts. Levitation, telekinesis, the ability to control nature, see the future … since she was born.  On tonight’s episode called, “Origin,” Bo and Tate get trapped in Manhattan and happen upon a wealthy woman mourning the loss of her son.

On last week’e episode  on the run and in desperate need of money, Tate (Jake McLaughlin) took Bo (Johnny Sequoyah) to Atlantic City, where she instantly bonded with a struggling mother and her sick child. The involvement of the FBI complicated Skouras’ (Kyle MacLachlan) efforts to covertly recover Bo, while Winter (Delroy Lindo) and Channing (Jamie Chung) worked to stay one step ahead.   Did you watch last week’s episode?  If you missed it we have a full and detailed recap for your enjoyment.

Tonight’s episode of Believe begins with Winter and Skouras sitting down in a diner, Roman says he wants to “call a truce.” Roman thinks that Bo deserves a chance to be truly extraordinary. Winter isn’t buying it, he says Roman doesn’t care about Bo. Winter says that he is honoring Bo’s mother Nina by protecting her, and promises Roman he will never get his hands on her.

Bo and Tate get off a train in NYC. He reminds Bo that they don’t have time for sight-seeing, they have to get to the address that Winter gave them. Meanwhile the FBI in NYC has photos of Bo and Tate going through a toll booth and they know that they are in New York.

Flashback 10 Years Earlier – Winter pays Roman a visit at his office after receiving information on Nina from Roman. Roman reveals that he has isolated a gene from Nina, and Nina needs Winter’s help to control her gift.

Tate has gone off course. After getting in an argument with a rich couple he pick pocketed their wallet. Bo is upset that he stole the woman’s wallet, so she insists that they go to the woman’s apartment and return it. The woman takes Bo down the hallway to give her a reward for returning the wallet, and leaves Bo in the living-room. She hands Bo the money and Bo has a vision, of the woman losing her son and her husband in the fighting in her country. Bo and Tate leave, and on the way out of the building Bo curses Tate out because she can sense that he robbed the lady again while they were in the other room.

Flashback 10 Years Earlier – Winter is meeting Nina, Bo’s Mom, for the very first time. He sits down with her and tells her to tell him about herself. She reveals that Roman forced her to dump her boyfriend “for the cause.” Nina reveals to Winter that her Mom went to an institution when she was 15, and now she is pregnant. Winter tells her not to worry about anything, and that he is going to help her.

The NYC FBI is closing in on Tate and Bo they have it narrowed down to a few blocks radius. Tate and Bo arrive at the safe-house that Winter set them up with. They arrive in the crummy run-down apartment and they find a package from Winter with new ID’s and passports, Winter left a note and said that he will bring them dinner.

Winter’s team is wavering, when they started out there were 10 of them, and now they are down to. Another member of Winter’s team walks out on him.

The FBI have found Tate and Bo, they just don’t know which apartment they are in. While the officers begin pounding on the doors, Tate and Bo make a run for it down the fire escape. They made it out, but the FBI agents find the note that Winter left for them. Winter calls Tate and tells him to meet him at a different address in an hour.

Flashback 10 Years Earlier – Winter and Roman are in the exam room with Nina during her ultrasound. Winter promises Nina that he will always protect her daughter.

Tate reveals to Bo that he is going to find a pawn shop so that he can sell the necklace he stole form the rich lady’s apartment. Meanwhile, Mrs. Delcash, the rich woman has realized that the necklace that her son gave her is gone.

Roman is watching FBI Agent Elizabeth’s press conference, he is annoyed because he thinks that she is incapable of finding Bo. Roman has decided he should “fight fire with fire” and he is considering sending Joshua, another one of his other gifted patients, on a field assignment to find Bo.

Tate and Bo arrive at the pawn shop, and Tate is less than thrilled when the store owner tells him it is only worth $100.00. Meanwhile Bo heads into the back of the shop where a boy is working. He is Mrs. Delcash’s son, that’s why Bo wanted to go to the pawn shop. She shows the boy the necklace Tate is trying to pawn and he says “I gave that to my mother.”

Flashback 10 Years Earlier – Nina draws a picture with her mind of Bo and Tate dressed the same as they are today, and says that the man in the picture is Bo’s Dad.

Bo and Tate take the boy from the pawnshop back to Mrs. Delcash’s house. He leaves them in the lobby and heads upstairs and is reunited with his Mom. Bo and Tate leave, and Tate is arrested in the street by two cops. They have no idea that Tate and Bo are the object of a man search, they are arresting him for robbing Mrs. Delcash.

Flashback 10 Years Earlier – Winter, Roman, and Nina are at a meeting with several government ages. Roman has set up to have an armed plane circle the skyscraper they are in, and shoot a missile at them. Nina destroys the missile with her mind, and then goes into labor.

Tate and Bo are in the back of a cop car. Winter is en route to meet them, and his team alerts them that the fake ID he gave the cops has just been ran and Tate is in custody. The FBI agents begun swarming the street where Tate has been picked up. Bo uses her mind to destroy Tate’s handcuffs and free him, and then destroys the cops gun. They make a run for it and Winter catches up to them down in the train station. Winter, Tate, and Bo board a train, and Winter promises Bo he is going to take care of her.