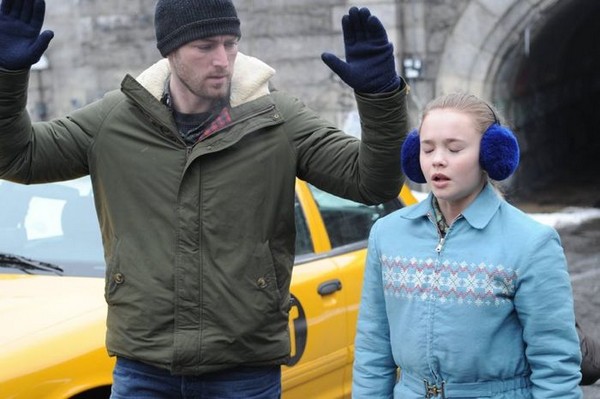 NBC’s brand new series BELIEVE hit the ground running and is getting better each week.  The show is called “Defection,” and it is about a dragnet closes in as Tate helps Bo locate the person who penned a long-lost love letter. Elsewhere, Winter plans an escape from Manhattan.

Tonight’s episode of Believe picks up where we left off last week. The police are still trying to figure out why their handcuffs and gun completely fell apart. Winters stashes bo and Tate in another safe house, and says he will be back in 12 hours to move them again. He instructs them not to leave the building.

Flashback 10 Years Earlier – Nina is dead. Skouras is trying to convince Winters that he is the best person to be caring for baby Bo. He doesn’t want her to go into foster care.

Winter leaves the safe house and Tate and Bo struggle to get warm. Bo asks him why he was in prison, he says that they thought he killed someone but he didn’t. Bo says that she believes him.

Skouras is lecturing Agent Ferrell about how to capture Bo. He informs her that stress makes her telekinesis powers stronger and someone could get serious hurt if they keep scaring her. He tells Ferrell to focus on finding Tate and Winter, and coral Bo in one area and call him. He wants to be the one to bring her in.

At the safe house Tate falls asleep and Bo sneaks outside. A butterfly emerges and shows her a letter and an engagement ring hidden inside a stone wall in the back yard. Inside Tate wakes up and realizes that Bo is gone. While he is searching for Bo Winter calls him and reminds him not to let Bo out of his sight. Tate heads out onto the crowded streets and begins searching for Bo, while trying to avoid all of the people that are searching for him. A man on the corner tells him that Bo took a bus to an address she had on a piece of paper. He tells Tate the address.

Meanwhile Bo is on a woman named Catherine’s doorstep. She gives her the letter and the engagement ring she found hidden behind a brick outside. She tells the woman that “he still loves you.” Catherine appears to be in shock.

Agent Ferrell puts out an alert with photos of every member of Winters’ team, Tate, and Bo. She instructs the NYPD to share it with every officer in all five boroughs.

Bo is sitting outside with Catherine. The letter is from Matt, her ex-boyfriend. When he was in Iraq he sent her a letter breaking up with her, and now she is engaged to someone new. She thinks her parents may have hid the letter with the engagement ring in it, but she can’t ask them now because they are dead.

Tate finds Bo walking down the street. She announces that she is going to find Matt, because Catherine is still in love with him, and they are supposed to be together. Tate grabs Bo and tries to take her back to the safe house. Bo throws a temper tantrum and runs off. Tate chases after her.

The NYPD have picked up Luke, the member of Winter’s team that quit last week and said he wasn’t interested in their mission anymore. Ferrell informs him he is under arrest for attempted murder, kidnapping, and theft of government property.

Tate finds Bo sitting on a bench and sits down with her and apologizes for being “mean.” Bo informs him she is still going to Matt’s house. Tate says she is “stubborn” and agrees to go with him.

Meanwhile Skouras is busy testing his telekinesis GPS. It should be able to pinpoint a location to Bo. His other telekinesis patient Josh is outside using practicing his mind-reading skills. Something goes wrong and the man he is trying to read’s eyes turn bright red. Josh is hurting him, not reading his mind.

Bo and Tate arrive at Matt’s house. Bo tells him they are friends of Catherine’s, and she is shocked to see that he lost his eyes in Iraq when he removes his sunglasses.

Agent Ferrell is questioning Luke, and wants to make a deal with him. She tells him if he gives her some information he can go “back to his life.” He tells her that Winters has set up a command center to track the pursuit and that is why they can’t catch Tate and Bo.

Bo takes Matt to the school where Catherine works and surprises her. Catherine sits down with Matt to talk to him, she says he should have told her what really happened and about his eyes, and she wouldn’t have cared. She tells him that it is too late and she is engaged to someone else. He says that he “gets it” and tells her to keep the ring, he wants her to have it. Catherine storms off leaving Matt on the bench.

Bo freaks out because Matt and Catherine “were supposed to be together.” Tate tries to drag her back to the safe house and she screams “no” and the ground around her thaws out and cracks. Skouras picks up a signal on his telekinesis GPS, and now he knows where Bo and Tate are.

Agent Ferrell is en route to Winter’s command center. She arrives with several FBI agents, but Winter has moved the command center. The building is empty. Ferrell receives a phone call from Skouras, he gives her the address from his GPS. He warns Ferrell to “contain but do not approach. Winter calls Tate and warns him that the police are on their way.

Catherine heads home and tells her fiancé that she seen Matt. She realizes that her fiancé is the one that hid Matt’s letter, because he wanted her all for himself. If he hadn’t hid the letter she would be married to Matt right now. She leaves her fiancé and heads to Matt’s house.

Farrell and her agents corner Tate and Bo and hold them at gunpoint. Bo uses her mind to pick up a cab and throw the vehicle at them. She didn’t hurt anyone, but it was enough to distract Agent and the cops so that she and Tate could make a run for it. They arrive at the boat dock where Winter is waiting for them and make a clean getaway out of New York.