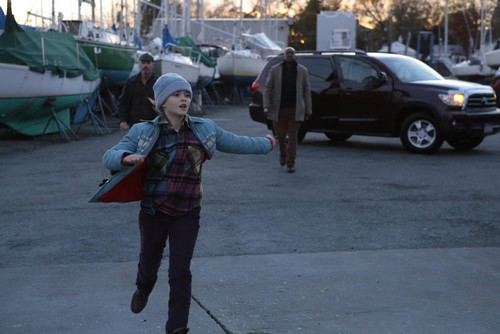 NBC’s brand new series BELIEVE hit the ground running and is getting better each week.  The show is called, “Sinking” and on it Tate travels home to confront those who framed him for murder. Elsewhere, Skouras puts his focus on a telepathic youngster.

On last week’s episode Bo (Johnny Sequoyah) and Tate (Jake McLaughlin) resurfaced in Philadelphia where Bo was drawn toward a young woman and her husband, a blogger whose unrelenting pursuit of a mysterious story was threatening to tear the couple apart. Meanwhile, Skouras (Kyle MacLachlan) took forceful action to track down a traitor within Orchestra. Delroy Lindo and Jamie Chung also starred. Kerry Condon and Nick Tarabay guest starred.  Did you watch last week’s episode?  We did and we recapped it right here for you.

Tonight’s episode of Believe begins with Tate driving in the middle of the night, he passes by a sign that says “Welcome To Hudson.”

Flashback 8 Years Earlier – Tate and another man are robbing a store. There is a wrench in their plans when they break in during the middle of the night and find two dead bodies. Their fingerprints are all over the store and they wind up being charged with murder even though all they did was break in.

At the safe-house Winter is reading Bo a story. Channing rushes in and announces that Tate has escaped.

Tate breaks into a house in the middle of the night, apparently it is his Dad’s. He tells his Dad he doesn’t want any trouble, he just wants a gun and to know where Patty (the man that robbed the store with him) is. His Dad tells him he is at Flint’s house.

Winter, Channing, and Bo head to Tate’s Dad’s house. Winter asks him where Tate is and he says he isn’t getting involved.

Tate arrives at Flint’s and asks the bartender where Patty is. A man named Jack greets Tate and hugs him. Tate asks Jack where Patty is, but Jack says he isn’t going to give him up. He doesn’t have to though, because Patty walks in the front door. Before Tate can approach Patty, a cop car pulls up to the bar. Tate runs out the back door and down the alley, and Winter and Channing conveniently pull up and rescue him just in time.

Skouras checks in on Josh, where Zoey is holding vigil. Zoey says Josh isn’t going to be up to par anytime soon. Skouras is upset because the military contract is up and they were expecting Bo. Not only does he not have Bo, Josh is out of commission. Skouras says he is going to have to use Shawn. Zoey warns him that Shawn is too weak, but Skouras doesn’t buy it.

Channing, Winter, Tate, and Zoey can’t leave Hudson because the cops have the city on lockdown. Tate heads back to his Father’s house with Channing, Winter, and Tate. While they are arguing over whether his Dad’s house will be a safe place to hide someone throws a bottle through the window and it bursts into flames. They all run out the back door and Tate’s Dad says it is his fault his house is on fire. Tate insists that it isn’t his fault, but he knows who did it.

Tate’s dad takes all four of them to an old abandoned garage with a boxing rink in it. He says they will be safe for now. Winter tells Tate that they are going to “do it his way” and that way everyone will get closure and everyone will be safe.

Skouras visits a teen boy named Shawn. He tells Shawn he “needs his help.” Shawn says he “can’t see anything.” Skouras pushes him to concentrate, but Shawn refuses.

At the garage Tate’s Dad is teaching Bo some boxing moves. Tate tells Channing he needs some air and he slips away. He tracks down a woman named Meg and demands that she tell him where Patty is staying.

Winter returns to the garage and Channing tells him that Tate ran off again, but Bo is really upset. Winter sits down with Bo and tells her not to be mad at Tate. Bo says she isn’t mad at Tate for what he is doing, she is just mad because he didn’t ask for her help.

Meanwhile Tate has found Patty. He barges into an apartment and attacks him and accuses him of stealing 7 years of his life and setting him up. Tate pulls a gun on Patty and Patty begins begins him not to shoot him. He tells Tate that he didn’t kill the people, Jack told him to do it. While Tate is holding Patty at gun point, Winter and Bo arrive.

Winter and Bo convince Tate to come back to the garage with them without killing Patty. Tate is confused, he is starting to doubt whether or not Patty really did set him up. Tate puts Bo to bed on the couch and tells her it is nap time.

The police track down Tate’s friend Megan and threaten her. They want to know where Tate is.

Tate and Bo are going for a walk. Tate apologizes to her for leaving her behind and almost killing Patty in front of her. He needs her help though. She makes him pinky promise that if she helps him he won’t hurt anyone. Tate takes Bo into Flint’s bar to see Jack. Tate tells Jack he talked to Patty, and then he asks him if he is the one that set him up. Jack insists that Patty will say anything to save himself. Jack offers Tate $50,000.00 to leave town and not come back because he doesn’t “want to see him hurt.” Tate takes the money and leaves with Bo. Once they get outside Bo says that Jack is lying, he didn’t give him money to start over, he gave Tate money because he feels bad about something he did to him.

Tate heads back to the garage, and Winter wants to leave Hudson. Tate said that he can’t yet, he still doesn’t know what happened. He tells Bo he doesn’t know if he can keep the promise he made her and then he storms off.

Meanwhile Skouras is still lecturing Shawn. Shawn explains that it is painful, but Skouras doesn’t want to hear it. Skouras manipulates him and tells him to do it for his friend Joshua. He tells Shawn to “end Josh’s suffering,” as they stare at him lying lifeless in a coma.

Tate heads back to an abandoned shop called “Breakers.” Jack, Patty, and two other men are waiting for him and pull guns on him. They tie his hands behind his back and take him to the pier. Tate wants to know what happened before he was arrested. Jack explains that he killed both of the men because they were stealing money from his organization. He sent Patty and Tate there to rob the place to set them up so they would take the fall for the murders.

Meanwhile back at the garage Bo tells Winter that Tate is in trouble and draws a picture of a boat. Tate’s Dad recognizes the boat and says that Jack owns a boat. They all rush to the pier to save Tate. At the last second Patty snaps and shoots Jack and his henchman. Jack is wounded, and a gasoline can is shot. Winter, Channing, Tate’s Dad, and Bo watch from the pier as the boat explodes and goes up in flames. They head back to the garage thinking that Tate is dead.

Tate marches into the garage a few minutes later. They are all thrilled to see him. Tate announces they can finally leave Hudson. Bo says that they can’t leave until Winter tells Tate the truth. Winter finally takes Tate aside and reveals to him that he is Bo’s father. Tate is shocked, he really had no idea.

Skouras heads to the military board. The army leader reminds Skouras that he is “building a weapon.” Skouras promises them they will have their weapon very soon.

Bo heads outside to find Tate staring at the sunset. He apologizes to her for all of the horrible things she seen him doing in Hudson, and she tells him that she forgives him.