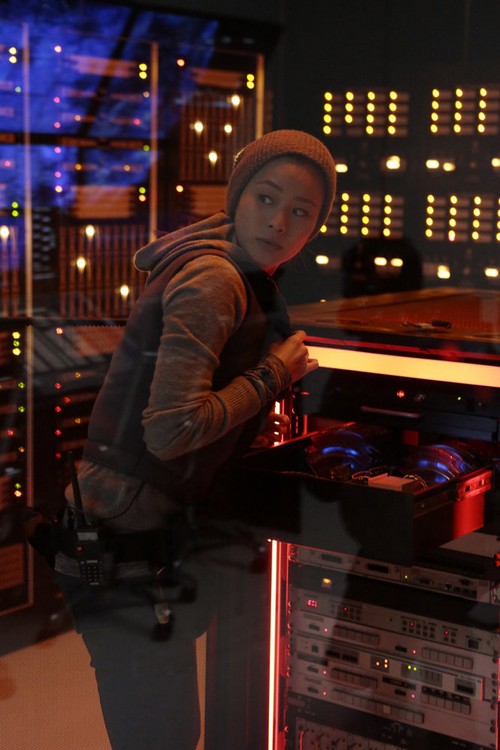 NBC’s brand new series BELIEVE hit the ground running and is getting better each week. The show is called, “Together” and on this evening’s episode Winter gets Channing to infiltrate Orchestra and Bo tries to help a man.

On last week’s episode a harrowing encounter with Zepeda put Bo’s life in jeopardy, after an intense confrontation with Zepeda (guest star Nick Tarabay) left Bo (Johnny Sequoyah) vulnerable, Winter (Delroy Lindo) turned to guardians from Bo’s past to protect her once again. As Tate (Jake McLaughlin) and Winter took risky action to help Bo, revisiting the girl’s past reveals surprising information about Channing’s (Jamie Chung) history. At Orchestra, Skouras (Kyle MacLachlan) pushed Sean (guest star Owen Campbell) to control his telekinetic abilities, with dangerous results. Kerry Condon guest starred.  Did you watch last week’s episode?  We did and we have a full and detailed recap, right here for you.

RECAP: We see Bo make a head out of water, Will goes over and says they are done and that Bo should go watch TV and eat junk food like a kid;Milton says there is a lot at stake and they need to get this figured out on who the head was. Will says that Bo should be normal, but Milton tells him that Bo will never be normal because she isn’t in general.

Bo is laying in bed with Janice, a bunch of men are breaking into the building so Milton and Will go to get them and lead them out to escape from the roof. Will breaks the door handle from behind so they wouldn’t catch up, the men break the door and Bo breaks the bridge they crossed over so they can’t be followed by the men.

Milton is talking to Zoe on the phone asking her a question; Zoe refuses to answer anything Milton wants so he hangs up. Will asks Milton if he has any clue who attacked them, Milton give Bo a hug and she asks why he’s leaving already; Milton explains he has work to do but wants to talk to her nefore he leaves. Milton tells Bo to be very careful with her powers nad not to be tempted to over use them.Janice tells Bo that she will protect her, Milton tells Will that he has to protect her with all he has. Bo asks Will to tell her a bed time story, Will talks about his life and how he went into a building to be safe from the rain, he met a woman and she read his palms; Will was told he’d meet his soul mate and believes that it was her, he fell for her completely.

Will tells Bo that’s the end of the story since the rest isn’t kid friendly at all.

Milton has a chip that hides Bo, it makes sure that she isn’t shown on the machine; though the catch is that the chimp must be put into the machine at Orchestra.

Janice is looking at the blue prints for Orchestra and mentions they have a way in with an abandoned sewage line; Milton tells Janice that she is on her own with this mission and that she will not be saved. Will and Bo are eating at a restaurant; he tells Bo she will have to start doing chores and Bo mentions she’d like to go to school. Bo looks off into the distance, Will asks why she is doing the mind thing; Bo mentions she can’t help it. Bo starts telling Will about what people are thinking and asks if they can help a man; Will tells Bo to stop what she is doing and says he’ll help. Will goes on over to the man and says his daughter is worried about the stranger, Bo tells him to let her hold his hand. Bo sees the man out and talking with someone; the man then pulls out a gun and shoots someone; Bo stops and says she doesn’t want that to happen.

Milton is in the sewers with Janice seeing her off, Janice says she’s got it and Milton hands her the chip.

Bo wants to help this man but Will is against it and that it isn’t normal to help everyone they meet; we now see the stranger inside of a store and he sees someone waiting outside. He tells his wife to take his kids to the office and goes out side after putting a gun in his pocket; the guy tells him they had an agreement and needs him to do his part. The man’s son comes over and ruins the possibility of a shooting happening, giving the stranger 12 more hours to do his part of this unknown bargain.

Janice is in the swears now walking till she finds an entrance; she starts to climb up to a drain where she gets through safely.

The stranger hears someone enter his shop and it’s Will and Bo; Bo asks if the man shot a person who came to his shop. Bo says he needs money, the stranger asks who they are and Will explains it all. The stranger mentions that his business is struggling and did take some money to help; he needs 100k. Will asks how much time he’s got left, the stranger says he’s got 9 hours and has his family being threatened.

Will and Bo went with the man to some home; Will is going in alone and is going to see if he can buy some time. Bo says she is proud of Will and he goes in to see a man. The guy says he knows why Will is there; Will is told he needs to go get a horse and the debt is forgiven. Bo is so excited because she loves horses, Janice is inside Orchestra and putting in a pass code; Janice is seen by a random guy and she knocks him out.

Will, Bo and the many we know as Gary now are driving down some road; going for the horse. Janice at the machine, Roman and another guy come into the room; Janice run to hide.

Bo walks into a building to ride a horse; the guy says that she can’t ride a racing horse. Will is walking around the place looking for a horse, Will sees a guy and tells him to clean the stalls better or he will get in trouble. Bo is with the man in the security room talking about horses; Will then finds the white horse that he needs. Janice is escaping from Orchestra but finds Zoe, she throws Zoe against the wall and mentions they are helping Bo and that Zore should keep quiet. Zoe just gets her stuff and says she never saw Janice here.

Gary is stopped by a cop and is told to get out the car, Gary drives off as Bo and Will get on the horse riding it through the forest. Janice is ecaping from Orchestra and notices that the grate is shut; Milton says not to panic and that they will get her out. Janice is caught by armed guards; Roman says it’s nice to see her again.

Will and Bo arrive to the mansion with the horse; Gary sees a black car pull up in front of his store and it’s the same man. Gary goes outside to greet him; Will and Bo are there shaking this guys hands. Gary’s debt is paid of; Gary decides to introduce his family to Bo and Will. Will tells Bo that what they did is not to happen again; they can’t help everyone. Will says he is her dad and that Bo should listen to her father. Will tells Bo it is time to practice and that she should give it her best shot; Will tells Bo to make a pyramid with the water and Bo does it perfectly; Orchestra gets a signal and they break into some girls room and she is alone.