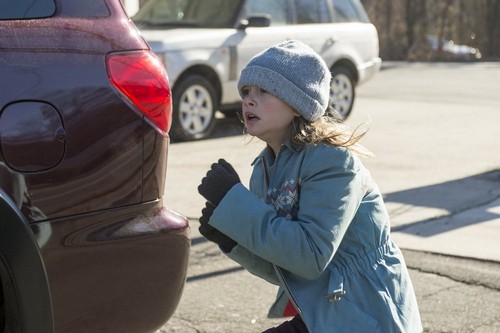 NBC’s brand new series BELIEVE hit the ground running and is getting better each week. The show is called, “Bang and Blame” and on it Bo is left vulnerable following a terrifying encounter. Tate and Winter take bold action to help her, leading them to surprising information. At Orchestra, Skouras forces Sean to control his telekinesis, leading to a perilous outcome.

On last week’s episode Bo (Johnny Sequoyah), Winter (Delroy Lindo) and Channing (Jamie Chung) were in pursuit, Tate (Jake McLaughlin) traveled home to seek out the childhood friends who framed him for murder. Meanwhile at the Orchestra campus, Skouras (Kyle MacLachlan) focused his attention on the potential of a young telepath (guest star Owen Campbell). Kerry Condon, John Finn, Michael Esper and Michael Drayer guest star.  Did you watch last week’s episode?  We did and we recapped it right here for you.

Tonight’s episode of Believe begins with Bo, Winter, Tate, and Channing on the road. Bo is drawing pictures of a farm and a King and Queen. They stop at a rest stop and Bo and Tate take a bathroom break. Channing and Winter discuss Bo’s pictures after they go inside and Channing wants to know why she is drawing “the Mackenzie farm?”

Winter follows Tate inside and tells him that he needs to tell Bo he is her father, Tate doesn’t want any part of it though. While they are buying snacks Channing runs in and tells them to “go out the back.” Skouras’ men have been tracking them and have arrived at the gas station. Bo drops in pain, she was shot with a tranquilizer. Tate, Winter, and Channing manage to get her into a car and hotwire it. Once they are on the road they pull the tranquilizer out of Bo’s leg, she is out of it and keeps mumbling “the monster takes them away.” One of the men chase them on a motorcycle, they are able to knock him off the bike and throw him in the trunk of their car. Winter says his wife lives nearby, at the Mackenzie farm that Bo was drawing and he wants to take her there because she is a nurse. Channing advises against it, but Winter takes her anyways.

Sarah, the nurse and her bf Carl run outside to greet them and Sarah takes Bo up to her old bedroom. Bo has a fever and a slow pulse and keeps mumbling that the monster in the chimney is going to get her. Sarah says that a tranquilizer shouldn’t have that kind of effect. She thinks that she may be having an allergic reaction but she needs to know what was in the dart. Bo has a dream of herself in Sarah’s house, she walks to the fire place and stares at the smoke coming out of it.

Tate wants to take Bo to the hospital, but Winter explains to him that it won’t work. Winter explains that Bo is “degrading,” it is what happens to people with telekinetic powers after they over use their powers. Soon, Bo will slip into a coma. There is one person that Winter can call that might be able to save her.

Meanwhile in Bo’s room Sarah is telling a comatose Bo how much she loves her and can’t wait for her “to come back to us.” Bo has another dream of smoke coming down the chimney and through the fireplace.

Tate and Winter are on the road. Winter wants to get as far away from the farm as possible before he makes the call because he doesn’t want them to trace the call. Winter finally decides it is safe to make the call, and he calls Skouras’ assistant Zoey and tells her that Bo is in trouble.

Carl heads to the barn and asks Skouras’ man if he was the one that broke into their house four months ago and kidnapped Bo from them and shot him in the leg (he walks with a cane now). He pulled the man’s shirt up and realized he didn’t have a scar-it wasn’t him that attacked him. Carl headed back in the house and talked to Channing he looked down at her arm and realizes she has a huge scar…she is the one that kidnapped Bo from them and shot him.

Winter and Tate meet Zoey at the train station. They describe Bo’s symptoms to Zoey and she thinks that it might not be degrade and it might be a coma she created with her powers because she was scared. Zoey gives them a syringe to give to Bo, it might bring her out of the coma, but it is still experimental.

Carl pulls a gun on Channing and tells her that he knows it was her that shot him and kidnapped Bo. Channing pleads that she “isn’t that person anymore.” Channing explains that Bo and Winter saved her life. Carl lowers the gun and Channing storms out.

Tate and Winter arrive with the medicine that Zoey gave them. After they inject it Winter reveals that they have to reach to her and convince her to wake up. Her temperature spikes to 106 degrees and Sarah begins panicking and saying she is going to have brain damage. Tate is furious, he wants Winter to take her to Orchestra. Winter refuses. Tate goes out to the barn and unties Skouras’ henchman. He tells him to take him and Bo to Orchestra. Channing attacks Tate but Skouras’ guy gets away and goes upstairs and gets Bo. Carl stops him and he and Sarah attack him. Tate runs in the house and finds Skouras’ guy holding everyone at gunpoint. When Tate arrives the gunman runs out the back door.

Bo has another dream with Tate in it. She asks Tate is he is her Dad, and he confirms it. He says “don’t let me lose you to her,” and Bo wakes up from her coma.

Bo, Tate, Winter, and Channing hit the road and camp out at another safe-house. Tate tucks Bo in and tells her that she came from the good part of him, not the bad part of him. She tells him everything is going to be okay.