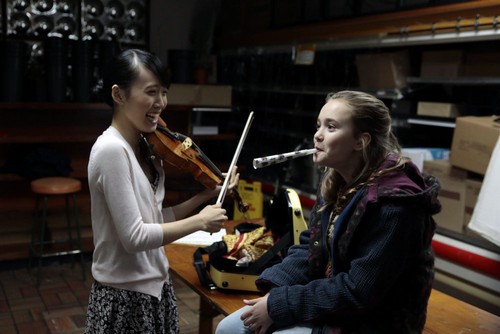 On last week’s episode worried that Skouras (Kyle MacLachlan) had developed the ability to locate Bo (Johnny Sequoyah), Winter (Delroy Lindo) sent Channing (Jamie Chung) on a mission to infiltrate the Orchestra campus. Despite Winter’s instructions to keep a low profile, Bo was compelled to help a family man who was in over his head. Jake McLaughlin also starred. Kerry Condon, Trieste Kelly Dunn, Erik Laray Harvey and Katie McClellan guest starred.  Did you watch last week’s episode?  We did and we have a full and detailed recap, right here for you.

We see a van with two parents arguing about how their child should keep practicing all the time, her dad tells their mother that their daughter should live more instead of just working all her life so hard. They get into a car accident and Bo comes back to reality with Tate; she tells him what happens and say she wants to help whoever it was.

Roman now goes inside of a building to see some girl who is supposedly just like Bo, he goes upstairs and starts reading one of the books on the floor; the girl tels him it isn’t his buisness. Roman says sorry and she bloclks his path off with a chair; Roman says he wants to help her. She refuses his help and says she can do everything on her own; she knows that Roman is here for what she can do. She starts reading Roman’s mind and he knows he’s in the right place.

Bo is now levitating, but can’t think properly without thinking of the girl; Tate tells Bo to stop thinking about it and work harder. Bo flies a cup oer Tates head, Tate decides he’ll hear her out. Bo tells Tate about the girl MArgaret, Bo then hears something like music; Bo pours the water on tates head. Milton says Roman found a girl like Bo and asks if Bo is practising; Tate says she is and Milton burns down their HQ.

Roman comes in to interrogate Janice, he wants to bring the new girl in to read Janice’s mind. Bo runs over to a store where she hears a girl playing the violin, she finds the Margaret she had a vision of; Bo walks in and says it was amazing. Margaret says thanks but admits making a mistake; Bo says it sounded great to her.

Tate is running around till he hears a violin inside of a shop, he walks in and starts looking for Bo; he reaches the end of the store and finds her with Margaret. Roman goes in to talk to Janice and says she is a terrorist; hoping that she is the first to confess all she knows. Roman tells her to do this the easy way, a guy comes over and starts staring Janice down.

Zoe is with the new girl Dani and tells her that Orchestra is here to help her control her powers and that she is an amazing person; she can become a whole new person. Dani goes to a room and is surprised when Zoe tells her it’s her room.

Tates says they know nothing about the accident and all of a sudden Bo runs over to the car they had the accident in; Tate goes over with a knife and pops their tires. The father comes out with Margret and is shocked at what happened; Bo and Tate pretend they don’t know what happens then they get invited to go eat with them having become new friends.
Dani tells Zoe abot how she had a diary and one day her brother stole her diary; he teased her and Dani screamed which made a bookcase fall over and crushed him.

Janice was stared down for three hours but the guy says he only got the thought from her mind was a song; Roman knows Janice got meditation training but knows they’ll crack her.
Tate and Bo are at Margrets house to eat; Margrets mother says it’s good to discipline the kids so they don’t end up in prison.
Roman sees the new girl is lifting heavy weight with her powers, he know she’s special and is happy to have found her.

Bo asks Margret if she likes playing, Margret says she wishes she could go out and play with friends more; though she is home schooled and has like no friends. Bo says she’s pretty much the same and the two decide to become friends; Bo once again goes into the vision to see Margret dead in the car, Bo realisesthat in the other car the man is knocked out; but Margret and her parents blow up in the car. Bo says they didn’t stop the vision and they must say something; Margret’s mother says they are going to a recital tonight and Bo tells them that they will all die if they do.

Tate says it’s so funny how Bo completely scared Margret and her parents out for their minds; Bo wants to do this because it’s important for her to save her friend. Tate agrees and lets her do what she wants.
Roman brings Dani in and tells her she is born to read Janice’s mind; Dani sits down and starts reading her mind, Janice is really struggling to keep calm and supress her thoughts.

Tate goes over to a woman at this office saying she wants to see where a car is since his package fell out; he explains he wants to show his daughter how to do the right thing, but the woman says rules are rules. While Bo uses her mind to print the information of the computer and takes it; Tate explains he is Bo’s parent and she is now grounded. Bo explains Margret will die, Tate says he will go look for the guy; Bo makes Tate pinky swear.
Roman has the information from Janice’s mind, figuring out that the Winter is at a back up safe house; wanting to go ahead and check out if what Dani read was completely correct.

A team has gone over to the possible location of the back up safe-house of Winter. Tate finds a house of a guy who’s heading to a wedding, the guy mentions he has to go and that it’s important. The guy gets in his car and starts to back up; Tate tells him that they must talk. The SWAT team moves into the building; Winter and Leeds is seen inside. The team is starting go inside the building armed; Roman calls in t osee what’s going on. All of a sudden the house explodes and people come over injecting some sort of fluid into Roman’s neck.

Tate is trying to stop the guy but a cop car comes close and making it impossible; Tate asks if this accident is seriously going to happen. Tate tells Bo to go and save them; she needs to use all she has practised to save their lives. Bo runs over to Margret asking if she can go with them, Margret’s mother says no but her husband say it’s fine; Margret says that it doesn’t matter how good she is but if she has no one to play for than it’s worthless.

A van pulls into a dark underground garage and a bunch of people seat Roman at the table. Winter takes off the sac on his head, Roman says it was well played; Winter says he is offering to let him go for Janice. Roman says he doesn’t understand Winter still; Winter says not everyone has the same intentions he has. Winter says that Roman must stop hunting Bo; Roman says Bo is Orchestra. Winter tells Roman he will let him live, but when he gets back to his world he will destroy Orchestra or he will be running from the FBI.

Margret’s parents are arguing in the car about what is best for their daughter, her mother asks what Margret thinks about practicing 7 days a week; her dad loses control but Margret saves them by turning the steering wheel. The guy in the other car comes to see if they are okay, the guy mentions he is getting married and must be there fast but hands them his car. He notices Margret’s violin and hands her his card for when she is ready, Margret notices that the guy is actually a conductor.

The trade between Roman and Janice is going down, Winter comes over showing that he is unharmed; they uncuff Janice and switch them over. Winter says the end is closer than they think; he tells Roman to remember their agreement. Roman pulls out a gun and shoots Janice. Tate is at the place for Margrets performance, he tells Margret’s parents that it’s a pleasure to see them again; Bo goes ahead and hugs Margret and tells her all her wishes will come true. Winter is trying to help Janice who is in critical condition; Zoe is caught by Dani giving Winter a call. Dani questions that Zoe is afraid of her and doesn’t let Zoe leave, Dani starts using her powers and cuts Zoe’s breathing; Dani says she knows that Zoe is a traitor and then leaves her alive.