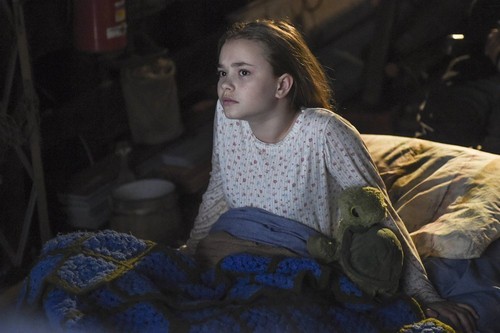 NBC’s brand new series BELIEVE hit the ground running and is getting better each week. This week’s show is called, “Revelation.” On tonight’s episode, Bo and Tate confront Skouras, leading to the revelation of an important secret. Meanwhile, Channing struggles to recover from a gunshot wound, and Dani comes to question her position at Orchestra.

On last week’s episode when Bo (Johnny Sequoyah) had a premonition of a tragic event in the New York City subway, she convinced Tate (Jake McLaughlin) to help her in stopping her vision from becoming reality. A confrontation with FBI Agent Ferrell (guest star Trieste Kelly Dunn) in the subway station quickly changed course when an explosion left them trapped underground. Meanwhile, Dani (guest star Mia Vallet) proved herself to Skouras (Kyle MacLachlan) as she settled into her new home at Orchestra. Also starring Delroy Lindo, Jamie Chung and Arian Moayed. Kerry Condon and Katie McClellan guest star.  Did you watch last week’s episode?  If you missed it we have a full and detailed recap, right here for you.

RECAP: We see Bo having a dream where she is being pushed on a swing by Roman, she wakes up and walks through the house to find Channing who is wounded and sick; Milton mentions that she has an infection and high fever. Milton tell Channing she needs a doctor, she refusese but could die if she does not get the proper treatment. Bo runs into her room and puts a blanket over her head, Bo mentions to Tate that if she wasn’t born than her mother wouldn’t be dead and Channing would never have been shot.

Tate says that they loves her and having her in this world is worth everything, Bo says everyone who takes care of her gets her hurt and wonders what will happen if Tate gets hurt; Bo says she doesn’t want to run anymore.

Milton says it can’t happen again, Tate asks what he means; Tate tells Milton they are done. Milton says Channing will survive this and that he will be back; Milton goes to his friend Brad to help him. Brad says he can’t do it, so Milton goes and puts a rag to his mouth.

Bo tells Tate that they need to go and ask that they should be left alone; Tate tells Bo it’s a beautiful idea and says he’s with her. A doctor goes to see Roman and she says that it’s really bad in Dani; believing that it will only get worse; Roman gets mad and throws the papers on the floor. Milton brings his friend Brad in; Brad takes a look at Channing’s wound; he sees that there are still pieces of the bullet inside of her.

Tate and Bo are looking for Roman to talk about them being left alone; Tate and Bo go and find some fancy looking clothes so that they can go to an event he will be speaking at. Roman goes to see Dani and asks her how she is doing, Bo focuses on a guy to get his badge; she pretends she is her daughters friend while Tate bumps into him and takes the badge. Dani notices some girl get up and leave, she asks her whats wrong with her hand; they both have the same rash but the girl just walks away.

Bo tells Tate she loves him and they decide to go ahead with their plan.

Tate gets a call from Milton and tells him that everything will be safe; lying that they are watching some street performance. Roman is talking on stage while Bo and Tate make there way into the back; Bo destroys one of the security men’s ear pieces making him leave. Brad says that Channing has to be in a hospital now, Brad tells Milton he is stubborn for thinking otherwise; she will probably die if not. Bo and Tate make it right behind the curtain, Roman is than escorted somewhere else.

Dani hears someone yelling that they are being hurt, she sees it’s the girl she saw earlier today and watches as she is forced out of her room and dragged away. Dani follows the people and notices the two guys in hazmat suits take her.

Roman gets into an elevator and it’s being forced to go to a floor they don’t want, the doors open and Tate hits the security guard in the face and takes Roman to see Bo; Roman says hello to Bo.

Bo tells Tate she wants to be normal and a family with her dad; Bo tells Roman he needs to stop chasing them. Roman says he has been working hard to find her a place to be safe, he wants her to come and live in Orchestra so that she can be safe and will keep the two of them away from harm. Tate says it’s all a lie, Roman says Milton has them live like fugitives; Bo says that Roman pushed her mother too hard and had her die. Security finally arrives and gets through the door; Bo and Tate have already left.

Dani walks all the way over to where they took the other girl, she enters the building and notices a bunch of people laying in hospital beds; she sees them take the girl and place her on one. They then strap her to the bed.

Dani is caught by one of the hazmat suit guys, she flies one of them in the air and the guy says they just don’t understand the rash so she throws him away after he mentions it will soon kill her. Milton takes Channing to a helicopter.

Roman asks what Dani is doing outside, Dani says she needs to talk to Roman; she tells him that Roman was lying to her the whole time and that he knew she’d get sick doing more. Dani says that Roman doesn’t care about anyone, she’s nothing but something he can throw her away. Dani starts choking Roman.

Tate and Bo are caught by Roman’s men, Bo strikes lightning at them and the two get back in their car and drive off.

We see a flashback of Roman and Milton together; we see how Milton pushed Bo’s mother too hard and had her killed. Milton says he doesn’t know what happened, but he knows he could have stopped the tests and save her mothers life; he knows it was a terrible choice of his. Milton says that what he has done has been to atone for what he did, he promises Bo’s mother to protect her and take care of her; Bo decides she will be going with her dad. Tate and Bo decide to go off on their own away from Milton and his group, Bo tells Milton to take care of Channing. Tate and Bo get into a car and drive off. Roman then calls Milton saying that he needs his help.