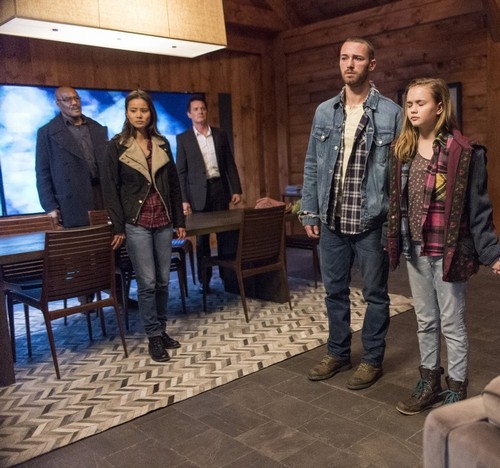 NBC’s brand new series BELIEVE hit the ground running and tonight it is already the finale episode. This week’s episode is called, “Second Chance.” On tonight’s episode, an incensed Dani seeks to destroy Bo and Orchestra in the Season 1 finale. Also: Skouras turns to Winter and Channing for help; and Bo and Tate attempt to begin anew on their own.

On last week’s episode as Channing (Jamie Chung) struggled to recover from her gunshot wound, Winter (Delroy Lindo) took desperate measures to keep her alive. With Winter distracted, Bo (Johnny Sequoyah) and Tate (Jake McLaughlin) sneaked away to confront Skouras (Kyle MacLachlan) and demanded he stop pursuing them. Meanwhile, Dani (guest star Mia Vallet) began to question her position at Orchestra. Also starring Arian Moayed. Nick Tarabay and Katie McClellan guest starred. Did you watch last week’s episode? If you missed it we have a full and detailed recap, right here for you.

On tonight’s episode when an enraged Dani (guest star Mia Vallet) concentrates her powers on the destruction of Orchestra and Bo (Johnny Sequoyah), Skouras (Kyle MacLachlan) turns to Winter (Delroy Lindo) and Channing (Jamie Chung) for help. Bo and Tate’s (Jake McLaughlin) attempt to start fresh on their own is short-lived when Bo has intense visions of Dani, and pulls them back into danger. Season finale. Also starring Arian Moayed. Nick Tarabay and Ella Rae Peck guest star.

If the last week’s episode was any indication, then tonight’s episode of BELIEVE is one that you won’t want to miss and we’ll be recapping it live right here. While you’re waiting for our updates you can hit up the comments and let us know what you think of Bo so far! In the meantime, enjoy a sneak peek preview of tonight’s episode below.

Tonight’s episode of Believe kicks off with Roman and Winter meeting in an abandoned warehouse. Roman needs Winter’s help with Danny. He reveals that he thinks Danny is going to try to kill Bo.

Meanwhile Bo and Tate are at a gas station outside of the city. Tate informs Bo they are headed to an old beach town in Mexico so that they can start over together. He tells Bo to go “do her thing” and buy a lottery ticket so that they never have to worry about anything again.

Roman is filling Winter in on Danny; he says that Danny is so powerful that right now he wouldn’t put any money on Bo. Danny is suffering from serious degrade and she blames Roman, so she wants to kill him, Bo, and Orchestra. Roman begs for Winter’s help and say he will do anything. Winter reveals that Bo and Tate left, and he has no idea where they are. So even if he wanted to help Roman, he couldn’t.

Bo has a vision of her Mom in the gas station. Her Mom tells Bo to ask the cashier about “the dove” and then she disappears. Bo goes to check out, and she sees a dove on her bracelet. The cashier says a friend of hers was having a hard time so she gave it to her.

Bo stares at the dove and has a vision of Danny wearing the same dove bracelet; she uses her powers to make the book case fall on her brother and kills him.

As they are leaving the store, Bo confesses to Tate that she had a vision. She doesn’t want to talk about it though because it was pretty confusing. Tate asks Bo to pretend it didn’t happen; he wants to get to Mexico and doesn’t want anything to slow them down.

Danny is in the cemetery sobbing at her brother’s grave. She apologizes to his headstone and asks him to forgive her. She heads to the warehouse where Bo and Tate were hiding out and has a meltdown and rips the pictures Bo drew off the wall. As she leaves the building it engulfs in flames.

Winter and Roman pay Channing a visit, they tell her that since Danny read her mind and got inside her head she can find her and will come looking for her. Channing isn’t a fan of being used as live bait. Winter, Roman, and Channing take a helicopter to West Virginia. Winter is hypnotizing Channing, he says it will draw Danny to them.
At the hotel Bo confesses to Tate that she seen her Mom in the convenient store in a vision, and that they need to find a girl named Danny. The butterfly that Bo always follows arrives, and Bo and Tate hop in the car and begin following it down the highway.

Danny arrives at the docks where Winter was hypnotizing Channing. She finds a mannequin with a wig on sitting alone at a table. A group of Roman’s men fills the room with gas to knock her out. They watch her on camera and are shocked that she is neutralizing the gas. Men run in to the smoke filled room and fire shots. A few minutes later Danny emerges, unharmed. She reads Winter’s mind and finds out that he tracks Bo and Tate on his cell phone; she takes his cell phone and leaves.

Bo and Tate arrive at an abandoned home for girls. They wander through the hallways looking for clues as to why they were led there. Bo finds a picture of Danny on the wall so they know they are in the right place. They find where someone wrote “forgive Me John” over and over on the wall. While Bo is explaining to Tate that Danny needs to be saved. Danny walks in and announces she doesn’t want to be saved. She picks Tate up and slams him against the wall, and creates a thunderstorm inside. She grabs Bo and runs out of the building with her, Tate wakes up and can’t find her.

Tate calls Winter and Channing for help and they arrive at the girl’s home. Winter says he thinks he knows where Danny took her, and Tate jumps in the car with them.

Meanwhile, Danny is driving Bo, and Bo is trying to reason with her. Danny says that she plans to destroy everything Roman loves, his company, Orchestra, and Bo.

Danny takes Bo back to Orchestra, and finds Roman has deleted all of his records, files, and cleared out the building. Winter and Tate arrive at Orchestra and find Tate and Roman tied up in chairs. Danny walks in and says “all of us together at last, we’re going to experience the end of Orchestra together.” Danny walks out of the door, and it locks behind her. Tate tries to break the glass, but it is shatterproof.

Bo has another vision of her Mom. Her Mom tells her that she can save everyone, even Danny. She just needs to let Danny know that her brother forgives her and that he doesn’t blame her for what happened. Bo uses her powers to unfreeze the door and open it.

Bo heads outside and finds Danny standing with a ring of fire around her. Bo walks towards her and tells her that her Mom says John forgives Danny. Danny doesn’t believe her; Bo walks through her ring of fire and takes Danny’s hand. She tells Danny to “listen to him.” The fire stops and Danny drops to the ground, she says “it’s true.” Bo agrees and says, “John loves you and he forgives you.” Bo touches the degrade marks on Danny’s face, and tells her that “everyone deserves a second chance.” Danny looks like she is healing.

Winter tells Bo she has to leave with her Dad. Bo asks Winter to come with her, but he reassures her that she doesn’t need him anymore. He hugs her good-bye and Tate and Bo run to their car; sirens can be heard in the distance.