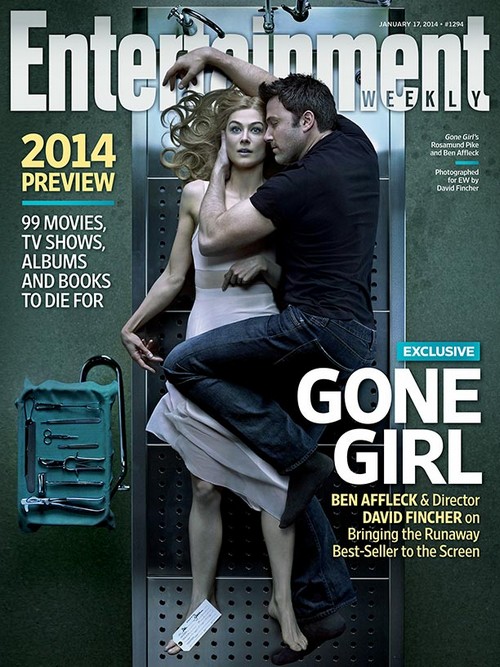 Yay for Gillian Flynn and Gone Girl fans. After getting our first look at Gone Girl through a still photo released a couple of weeks ago, we’ve now gotten our first Entertainment Weekly cover. As a bestselling novel, Gone Girl was always primed for success on the big screen, but with David Fincher‘s involvement, it’a almost guaranteed.

The cover shoot is unsurprisingly sexy and creepy at the same time. Ben Affleck snuggles with an apparently lifeless Rosamund Pike, which is a clever play on the story. For those who don’t know anything about the book or movie, we won’t spoil it for you. But suffice to say, it’ll be really interesting to see how they pull this off in a movie as opposed to a book.

Anyway, here’s yet another role where Ben Affleck is required to get up close and personal with his female co-stars, including both Rosamund Pike and Emily Ratajkowski. I doubt Jennifer Garner is happy with that situation, and especially this cover. At this point, doesn’t Ben Affleck have enough pull to refuse to do this sort of cover? I mean, it’s Ben Affleck and Entertainment Weekly. I’m sure that if he put in a request, he could make it not happen. I mean, after Brad Pitt got together with Angelina Jolie, he refuses to do movie roles that require him to do sex scenes with other women, or even pose in sexy magazine shoots with other women. Yes, Ben Affleck is not Brad Pitt, but still – you’d expect him to do the same, especially to keep his wife happy.

However, David Fincher specifically dreamed up the cover image and also shot it. And Ben’s not going to say no to David Fincher, is he? No, David Fincher has full creative control and when Ben agreed to take the role, he would have known that going in. David Fincher > Ben Affleck in Hollywood hierarchy.