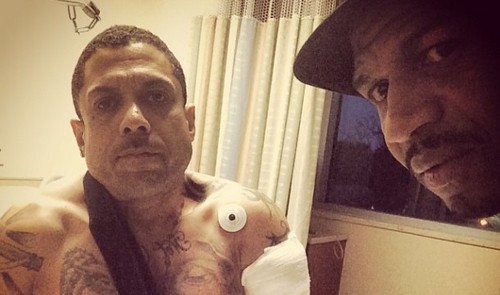 If you’re a fan of Love & Hip Hop then you already know who Benzino (real name Raymond Scott) is and you also know that he loves to get attention. Hot chicks, dripping in chains and a Rolex, he wants you to notice him, usually. I’m guessing that he’s not at all happy with the headlines that he is grabbing this morning though. Yesterday while driving through Duxbury in a funeral procession headed to St. Peter’s Church to bury his mother, Mary Scott in Plymouth, Massachusetts Benzino was shot three times in the arm.

The former owner of Source magazine stumbled out of his car and flagged down a passerby to help him. Apparently a long standing beef with his nephew, Gai Scott turned violent yesterday. The 36-year old was arrested almost immediately and Benzino is recovering in the hospital and doing well enough to have pal Stevie J. post a photo of him on Instagram. He did however miss his mother’s funeral and the hearse that carried her was eventually tagged as evidence due to the blood stains on it.

Scott passed away on March 20th and in the days following Benzino has posted several tributes to her on his social media and also has expressed confusion at the idea of continuing his life without her. This is obviously not a good month for the VH1 star. Do you thing that Love & Hip Hop will touch on this incident at all? They seem to enjoy getting all wrapped up in the beef between co-stars. Do you think that this situation might be too sticky even for them? Tell us your thoughts in the comments below!