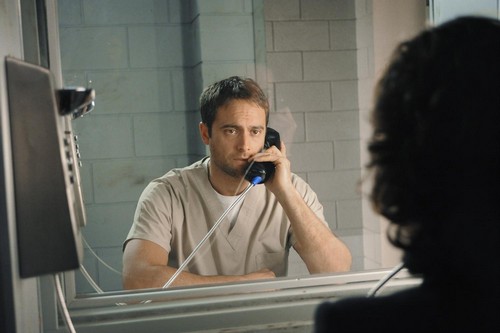 Tonight on ABC their sensual and gripping new drama BETRAYAL continues with a new episode.  On tonight’s show called, “…the Karsten way” the Mrozek murder investigation reaches a fever pitch.  Did you watch the last episode?  We did and we recapped it right here for you.

On last week’s show Elaine and Aidan struggled with defining their relationship as they continued to get to know each other. Jack took a big step in his relationship with Sara but it might all be for naught as the murder investigation looms. Karsten continued to whisper in Drew’s ear about Lou Mrozek’s murder, while Drew’s reignited interest in the case leads to a shocking result.

On tonight’s show Jack’s confession sends shockwaves through the McAllister and Karsten families. As Elaine, Valerie, Victor and TJ come to grips with a future of Jack being in prison, the truth about Lou Mrozek’s murder finally becomes clear. Meanwhile, Sara is resolved to exonerate her lover and tries to find evidence to clear him by revisiting their past.

Jack has admitted to killing Lou and throughout his interrogation the only thing on his mind is Sarah. Everything he’ telling the police is a lie. He wasn’t there when Lou died. He was with Sarah. Although he’ll never tell anyone about his alibi for the night.

Sarah wants to see him. She needs to talk him out of what he’s doing and yet she can’t. She’s not family and so she can’t walk wilily nilly into the prisoner’s visiting area. She’s stuck waiting outside while Elaine gets to walk right in. They had run into each other in the waiting room. A meeting between wife and mistress. It was as awkward as it sounds. Elaine couldn’t help herself from bringing up Sarah’s impromptu visit to her restaurant. She wanted to embarrass Sarah before she was allowed to see Jack.

The meeting wasn’t pleasant to say the least. At the start, Elaine believed Jack was innocent. All he had to do was remind her how little she knows about him now in order to get her to change her mind. After that she is furious. It almost scary to her how callous he was being with TJ’s life. How could he do that to her brother?

Returning home, Elaine finds her already full plate added with teen drama. Her children have a difference of opinion on their dad. Val hates her dad for being nothing better than a thug and Victor says their dad had his reasons. Elaine doesn’t ask Victor why he’s suddenly the supportive son. All she tells them is to stop fighting.

Sarah did get to see Jack. She tried to talk to him out of his confession. He doesn’t want that and he tells her she just has to understand. That was dumb of him. She won’t understand why he would go to jail for a crime he didn’t commit and she’s going to save him even if he won’t appreciate. She went to Drew and he was no help. Thatcher’s “assistance” and Jack’s confession was all he needed. He wants to nail Jack and even Jack has noticed Drew’s zealousness. Why couldn’t Sarah?

The only way to prove Jack’s innocence is to retrace their steps. They had gone away when Lou was killed. Finding witnesses and proof of their getaway is her last remaining option.

Thatcher was shocked to hear Jack confessed. He originally thought it was his own dirty work that landed his former golden boy in Jail. Elaine had to tell me the truth and was he happy? No, he was not. He knows the confession might lighten up Jack’s sentence and he doesn’t want that. No matter what that would for his grandchildren. He tells Drew to go for first degree and nothing less.

Jack is covering for someone and even his own lawyer should know it by now. He doesn’t want to fight first degree charges and he doesn’t want to take back his confession. He wants all investigations into that night to end. If only Sarah had listened. She found security footage of them together and she’s going to use it. Prior to showing it to Drew though she must have thought it through. She showed the proof to Jack. She did it to say she’ll believe in him. If he feels he has to do this then she’ll support it.

All the while, Victor finally tells his mother what happened that night. He didn’t plan on shooting Lou. It was Lou that pulled out the gun on him and TJ. What he did was out of self-defense.

Jack told Sarah the truth in a way. He made her go looking ofr a present he had wrapped up. Inside was supposed to explain why he’s doing this. When she opened it she saw a photo of him and his son. It wasn’t hard for her to figure out the rest.

Jack’s lawyer, Lila, went to go see Thatcher. She’s been a part of the family’s business for a longtime and that should at least provide her some leeway. She asks Thatcher why he’d turned on Jack. He had a chance to do way back and didn’t. Thatcher claims Jack killed family this time but Lila warns him. He goes after Jack then she’ll go after him.

Sarah was going to keep Jack’s secret. She even told Drew her message from earlier wasn’t worth anything but she couldn’t take it when Drew said he was pushing for murder one. She told him not to do it because Jack was innocent. She showed the still image from the security camera and when that failed to move him; she told him Jack confessed to protect his son.

She revealed it all for nothing. Drew still thinks Jack should be punished. All Jack has done was lie. Drew will go after him but Sarah has given him an idea. He gives Jack an offer. Jack has to turn on Thatcher or else Drew will go after Victor next. It leaves Jack with no other choices. He agrees.

Sadly, freedom isn’t as good as it should have been. Sarah dumped him not long after he was released. She said she couldn’t bring her son around the Karsten family. It wasn’t safe. She leaves out the part how Drew had told her it wasn’t safe and that’s why he didn’t want to let Jack off the hook. It seems Sarah also made a deal for Jacks release!