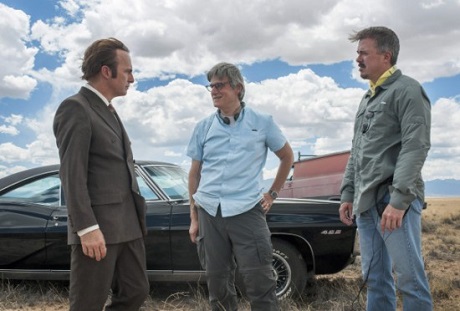 For those who were fans of Breaking Bad, AMC’s maga-hit drama that had everyone on the planet talking for months on end, then get ready for the spin-off series, titled Better Call Saul. Apparently, the network has enjoyed the work they’ve seen so far on the show and have already granted the series a season 2, which will consist of 13 episodes and premiere sometime in 2016. Season 1 is scheduled to premiere in early 2015 and will be comprised of 10 episodes.

Currently, there’s no trailer to view and pick apart; there is, however, an official photo that’s been released (pictured above). The photo features Vince Gilligan and Peter Gould (co-showrunners) and Bob Odenkirk, the talented actor who will be reprising his role as Saul Goodman — the badass lawyer we all knew and loved from Breaking Bad.

Are you getting excited for this spin-off show? If so, let us know your thoughts in the comments section below, and don’t be shy. Do you think this was a good move to make? Do you think AMC should be expanding the Breaking Bad universe or do you think they should’ve left this character behind when they closed the books on BB?

According to IMDB, the show description is as follows: The trials and tribulations of criminal lawyer, Saul Goodman, in the time leading up to establishing his strip-mall law office in Albuquerque, New Mexico.