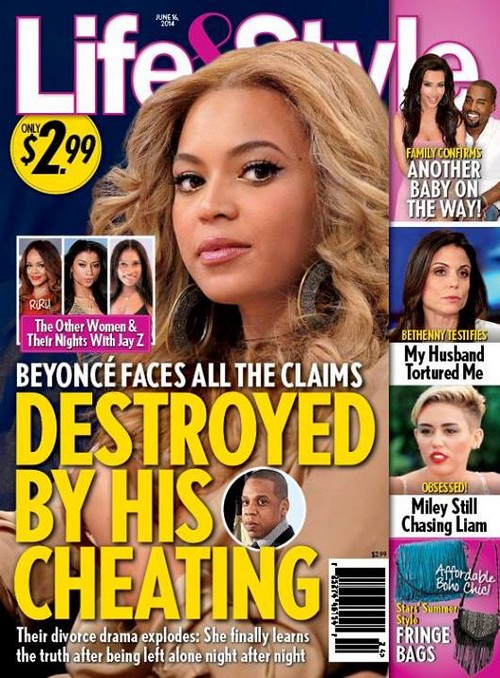 The day had to come when Beyonce was going to learn the real story and divorce Jay-Z, right? Not the lines and lies that Jay-Z has apparently been feeding her for years, but the truth. She has supposedly suspected that he has cheated on numerous occasions but Beyonce has opted to believe her man when he explained why he was MIA so much – at least until now. After that elevator surveillance tape was leaked to the public a few weeks ago it changed everything. Solange Knowles served to prove to the world that she thinks Jay-Z is a cheater and wants her sister to divorce him ASAP. Now the whole world suspects that Bey isn’t the strong woman that she pretends to be and she had to do something about it.

According to the June 16 print edition of Life & Style magazine Beyonce has finally gotten to the bottom of the lies. Over the years she has heard rumors about Jay hooking up with Rihanna, Rita Ora and every other protege he has had and now she knows that there is certainly some truth to the rumors. I guess the first step towards becoming that strong woman that Bey portrays on stage is to face her own reality and she is finally doing that. We expect a final split between the Beyonce and Jay-Z after their ‘On The Run’ tour concludes.

Sources say that facing the fact that Jay has cheated repeatedly ultimately leaves Bey with no choice but to divorce him. She has stayed in the marriage for this long because she chose to believe all of his lies. Now that the truth has been laid at her feet she can’t continue to live a life that is rooted in lies and distrust. Do you think that Bey and Jay will play the happy couple while touring together this summer and then announce a split once they come in off of the road? Tell us your thoughts in the comments below!