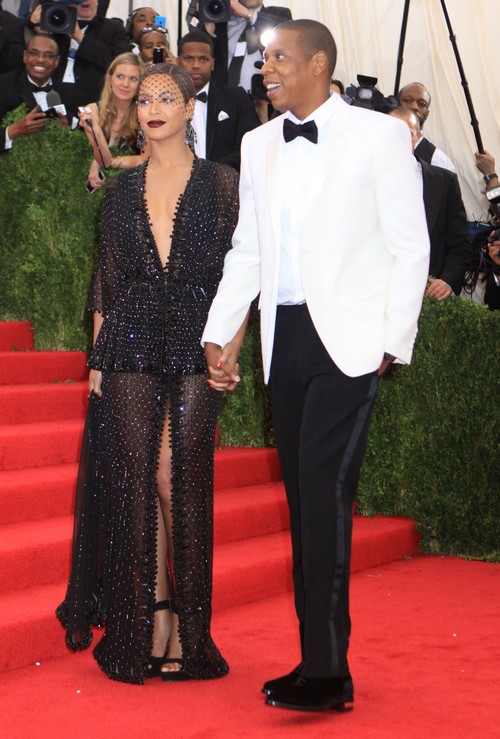 Once a single crack appears it doesn’t take long before there are more. Up until yesterday Beyonce and Jay-Z were functioning like a well-oiled machine when it came to the press. Totally devoted to each other and their daughter Blue Ivy with an “us against the world” kind of attitude and in spite of the rumors, we kind of bought it. I think by now everyone has seen the footage of Bey’s sister Solange going in on Jay in an elevator at The Standard in NYC after the Met Gala last week. Just as shocking as Solange’s violent outburst was the fact that Beyonce didn’t intervene to try and break it up. At least it seemed shocking but now there are new stories being told and a pattern of violence within the Carter/Knowles family is starting to emerge.

According to Blind Gossip there was an altercation in the Green Room at last years’ Superbowl where Bey famously performed. She and her Destiny’s Child sisters, Kelly Rowland and Michelle Williams were seated calmly and Jay-Z got ticked off because his wife was more interested in her phone than she was him. He grabbed the phone and started reading through her text messages and flipped out, his quiet string of obscenities turned into a raging tirade that scared NFL staffers that were nearby watching. Bey finally got sick of his meltdown and as he called her every derogatory name in the book she pushed, shoved and fought to get her phone back as her sisters sat by ignoring the entire thing!

The entourage’s reaction (or lack of one) really indicates that this event was nothing unusual, they are used to seeing this kind of stuff from the family. Also in that Green Room was Blue Ivy and according to the NFL staffer no one even tried to shield her from the physical fight that her parents were having. Ironically, all three ladies went out and performed the Superbowl Halftime show as if nothing at all had happened.

My guess is that there are probably a lot of stories similar to this one that are now going to find their way on to the internet. I wonder how long Bey and Jay’s camp thinks it can take before issuing a statement against violence. If they wait to long then there will be media backlash I’m sure. In the meantime what are your thoughts on them now? They have tried to convince us that they are such a classy couple but perhaps “gangsta” and “hood rat” are better descriptions don’t you think? I’m guessing those White House invites will dry up fast. Tell us in the comments below!