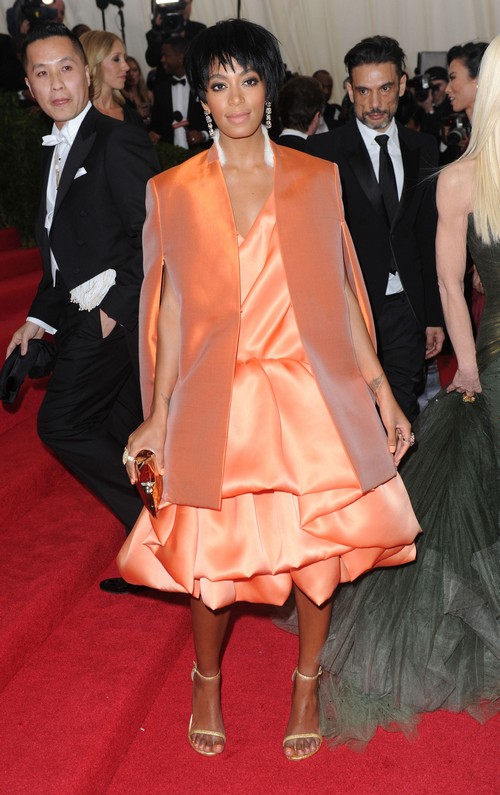 Solange Knowles and Jay-Z have never exactly been bosom buddies despite their familiar connections, but who ever thought that Solange would have the guts to hit him? Based on surveillance footage acquired by TMZ, Solange physically attacked Jay-Z inside an elevator at a MET gala afterparty last week, with Beyonce standing next to them.

The attack reportedly took place at the Standard hotel in NYC, where Beyonce, Jay-Z, and Solange were attending an afterparty for the MET Gala. The video shows Beyonce, Solange, and Jay-Z getting into an elevator together, and seconds later, Solange loses it. The attack is pretty brutal, with Solange kicking and screaming at Jay-Z, even though his bodyguard attempts to stop her. Jay-Z can be seen trying to stop her, but he never hits her or retaliates. Beyonce, on the other hand, stands by without getting involved at all.

It’s not clear what caused this fight, but it’s obvious that Solange was just waiting for an opportunity to unleash on Jay-Z before they got on the elevator. It’s also curious that Beyonce refused to get involved, considering it was her sister trying to beat up her husband. It lends credence to those rumors that Jay-Z was cheating on her, no? It makes sense, and it would explain why Solange was so angry on her sister’s behalf, and why Beyonce didn’t even attempt to stop the fight.

Of course, it could have easily been due to any number of other explanations, especially when you take Solange’s history with Beyonce and Jay-Z into consideration.

Anyway, the fight didn’t necessarily end on the elevator, because the bodyguard flipped the emergency switch on the 12th floor. He probably knew about the surveillance footage and wanted to get everyone away from the cameras to give them privacy. But even though we don’t know what went down after they got off the elevator, all three of them – Jay-Z, Beyonce, and Solange – were seen exiting the party a little while later, and Solange looks extremely angry in the footage.

What do you guys think caused the fight? Let us know your thoughts in the comments below.

Update we have now learned that Beyonce sided with her sister Solange in the fight and left with her – abandoning Jay-Z!  As TMZ reports: All three walked out of the building together — Solange looks pissed — but while Bey and Solange get in one car … security walks Jay to a different one. Let’s face facts – Jay-Z has done something to really piss of Solange and Bey is siding with her sister.