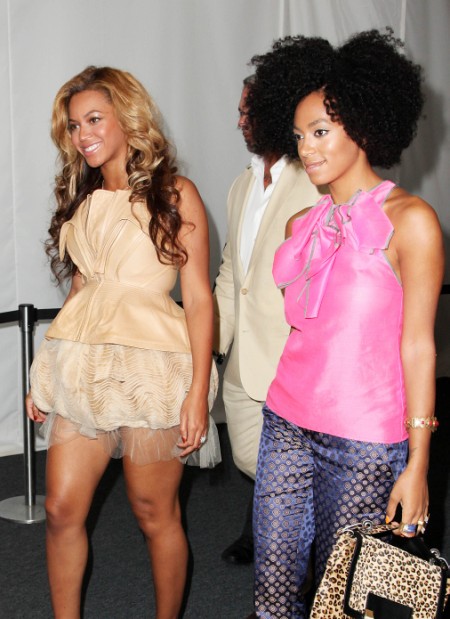 Recent pictures of Beyonce and Kim Kardashian hanging out during a Jay-Z/Kanye concert were enough to make Solange Knowles want to step up and knock some sense into her superstar sister. It seems Solange (as well as a heap of other people) isn’t too stoked about Beyonce mixing company with the reality star but when she confronted her with the sweet, sisterly advice, Beyonce freaked out.

“In Solange’s eyes, BEYONCE is a stand-out star, a premier singer of our time, whereas Kim is just a reality TV star who only got famous after a sex tape was leaked,” an insider told the National Enquirer. “So she called Beyonce out on it, and they had a fight over Kim. It culminated with Beyonce telling Solange she can be friends with whomever she wants.”

Solange is also wise to the fact that Kim is desperate to be Beyonce’s friend and even showering little Blue Ivy with gifts to get into the singer’s good graces. Just last month Kim had the delusional nerve to buy Blue a $5,000 diamond-studded baby bracelet and had it engraved with “Love Auntie Kim!” Even Beyonce thought that was a little much.

Could this just be a case of Solange feeling slighted by the budding friendship? I don’t think so. Beyonce and Solange are only sisters and tight. Solange’s got to feel pretty secure that she won’t be stepped over by the skull crushing Louboutins of a Kardashian. And it’s not like she’s ever got on Beyonce’s case about her other famous friends like Gwyneth Paltrow, though that just might be self-preservation. Gwyneth will cut a b-tch if they mess with her! The Kardashians are much easier targets! Solange is just trying to slap some sense into her sister. She’s the biggest, most successful entertainer in the world and Michael Jackson’s heir apparent, she has to live up to certain expectations. Gwyneth Paltrow makes an odd sort of sense, Kim Kardashian not so much. But before Solange lets the feud go on any longer I think she should relax and reflect. Beyonce’s obviously doing her boy Kanye a solid. She’s too sweet to shun his girlfriend to her face. They hang when their men hang – period. They won’t be vacationing in an RV together anytime soon like Gwyneth and Beyonce are rumored to be doing.

What do you make of Solange’s argument? Is she being too protective of her sister or is she right in thinking Beyonce should protect her image a little better and not mix in the same circles as sex tape stars?