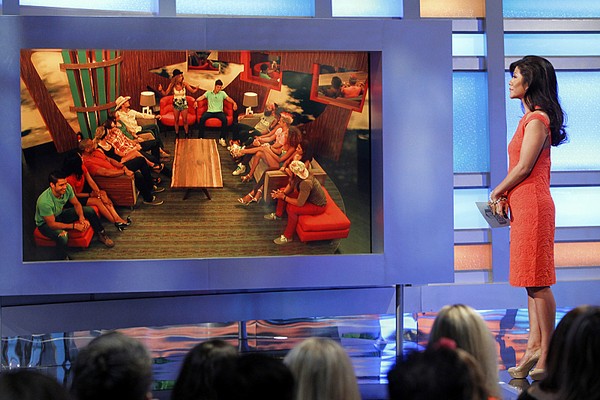 Tonight on CBS BIG BROTHER returns for the eight episode of their 16th season. On tonight’s episode a house guest is evicted and we will see anothe rhead of household competition.

On the last episode house guests; Derrick, Caleb, Jocasta, Donny, Devin and Christine fought for the power of veto, Donny ended up winning. During the Battle of the block competition, it was a Harry Potter theme and both Donny and Amber won, with Jocasta and Caleb left on the block. The POV was used by Donny to take Jocasta off the chopping block, Devin was put up as a replacement nominee and you know what they say about getting evicted… back door is the only door! Did you watch the last episode? If you missed it we have a full and detailed recap, right here for you.

On tonight’s show a house guest will be evicted from the Big Brother house, also the head of household competition will be held and we will find out who will become the new head of household.

Tonight’s episode of Big Brother kicks off with a recap of what has happened during Week 3 in the BB16 house. A dangerous love triangle is developing between Caleb, Amber, and Cody. Caleb has been obsessed with Amber since the game began, and even put himself up on the block to save her. The thing is, Amber doesn’t feel the same way, and clearly has a crush on Cody. Caleb knows that Amber likes Cody, and it has put a huge bulls-eye on Cody’s back.

In the middle of the night, Amber is up with Cody and they are laying in bed together. While they are talking, Caleb keeps coming in to the bedroom to see what they are doing. Cody heads outside and vents to Derrick and Zach that he is sick of Caleb’s crap. Zach agrees and says that Caleb hates Cody because Amber likes him. Zach is stressed because he doesn’t want to lose his alliance member Cody over Caleb’s obsession with Amber. Meanwhile, Nicole and Hayden are in the house lying in bed together, cuddling. Hayden is trying to get Nicole to kiss him, and Victoria comes in and kills the mood.

Later, Devin and Cody are outside bonding and playing pool. Devin opens up and talks to Cody about his custody agreement with his daughter and his days in rehab. Cody confesses to Zach that Devin isn’t as bad as he thought he was. Cody and Zach are considering voting Caleb out instead of Devin this week. They think it is a prime opportunity to get Caleb out while they can.

Zach brings Frankie in on their plan, and Frankie thinks it would be smart to vote him out now. Frankie heads upstairs to the HOH room and asks Derrick what he thinks about voting Caleb out and keeping Devin. Frankie thinks its funny that Caleb is “so blinded by Amber” that people are talking about voting him out and he has no idea.

Up next is a clip of Big Brother alum Jeff Schroeder visiting with Donny’s girlfriend, parents, and brothers and sisters. Jeff spends a day in the life of Donny, and works as a groundskeeper, watches TV with his parents and does some Soduko.

It’s time for the live evictions, Cody and Devin both give one last speech before the houseguests head in to the diary room to cast their votes. Jocasta, Nicole, Donny, and Hayden head in to the diary room first, and they all vote to evict Devin. Zach, Cody, and the rest of the houseguests all vote to evict Devin as well. It’s unanimous with a vote of 11-0 Devin is officially evicted from Big Brother 16.

It’s time for the next Head of Household competition. The houseguests are divided in to random teams. Victoria and Christine, Caleb and Nicole, Brittany and Jocasta, Amber and Zach, Donny and Hayden, and Cody and Frankie will all be competing as teams. Each team is placed in a cage, so that they can’t see the other teams. The competition is called “Deviled Eggs” Each team must work together to move their 12 eggs safely through slots in their cages from the start to the finish line. After several minutes the houseguests are not even close to moving all twelve eggs. As of right now Amber and Zach are in the lead, but they could be up all night competing for the HOH crown.

The remaining thirteen houseguests (excluding Derrick who is the reigning HOH) are currently competing in the next Head of Household competition.  CDL will post the results, and the new HOH’s for Week 4 as soon as the competition is complete!