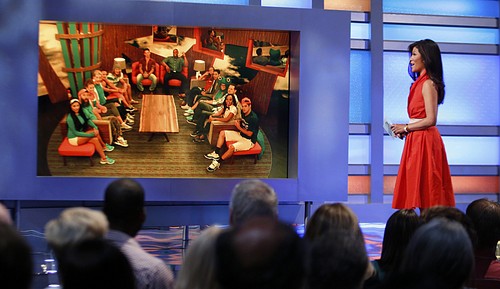 Tonight on CBS BIG BROTHER returns for the twelve episode of their 16th season. On tonight’s episode we will see the end of the HoH competition and nominations for eviction are revealed.

On the last episode there was a live eviction; Cody and Devin both gave one last speech before the houseguests headed in to the diary room to cast their votes. Jocasta, Nicole, Donny, and Hayden voted to evict Devin. Zach, Cody, and the rest of the houseguests all voted to evict Devin as well. It was unanimous with a vote of 11-0 Devin was officially evicted from Big Brother 16. Immediately following the eviction there was a new HOH competition, but the results were not shown. Did you watch the last episode? If you missed it we have a full and detailed recap, right here for you.

On tonight’s show we will find out who the Head of Households  are and which four houseguests they decide to nominate for eviction.  We will also see the battle of block competition.

Tonight’s episode of Big Brother 16 picks up where we left off on Thursday night, the remaining houseguests have just said goodbye to Devin, and now they are competing in the next Head of Household competition. After tediously passing twelve eggs through the holes on a cage made out of chicken wire, Frankie and Cody are crowned the new Head of Households.

After the competition, the houseguests begin anticipating Cody and Frankie’s nominations for eviction. Brittany breaks down in tears and confesses to Donny that she thinks she is going up on the block again because she wasn’t part of the Bomb Squad alliance. Donny is friends with Frankie and Cody, but he is still concerned that he might wind up on the block as well.

Cody and Frankie race up to their Head of Household room to see pictures of their families. They read the letters from their families out loud, and everyone cries over how sweet Ariana Grande’s letter was to Frankie, but they still have no idea who his sister really is.

Cody, Christine, Frankie, Derrick, and Zach decide that they are remaining members of the Bomb Squad now that Devin has left and Amber and Caleb are doing their own thing. They decide to call their new alliance “The Detonators.”

Later on Cody, Frankie, and Hayden are sitting outside, discussing their man-crushes on Zac Efron. Cody thinks that if you run in to Zac Efron’s abs you will “shatter in to a million pieces.” Hayden’s man-crush is Leonardo DiCaprio.

Frankie heads in to the diary room and finds another mission for his Team America alliance. They have to put a “physical threat” up on the chopping block. The only problem is, Frankie is aligned with all of the physical threats in the house. Derrick thinks that they should nominate Amber, since she is the strongest girl in the house.

Meanwhile Brittany is having a meltdown. She complains to Frankie that she knows Cody is going to put her up on the block because she is the only girl in the house that doesn’t follow him around and flirt with him. Frankie runs and tells Cody what she said, so Cody calls her out on it. Brittany says that she is over living in the Big Brother house and she thinks she is “too old” for all the high-school drama.

This week there are no Have Nots in the Big Brother house, so the houseguests are all trying to work out their sleeping situations. However, no one wants to sleep with Victoria because she is “too high maintenance.” Nicole and Brittany throw each other under the boss and cause drama arguing over which one of them is going to sleep with Victoria.

Meanwhile, Frankie takes Amber in to the supply room and breaks the news to her that she is going to be going up on the chopping block this week. She is furious because she thinks she and Frankie are in an alliance, he tries to explain to her that she is just a pawn and she isn’t going home, but she doesn’t want to hear it.

It’s finally time for the nominations ceremony, and the houseguests gather in the living-room. Cody announces that this week he is nominating Victoria and Brittany. And, Frankie nominates Jocasta and Amber.

After the ceremony Victoria runs in to the bedroom to cry, and Cody follows her and apologizes to her. He says she isn’t the target this week, and she is “just an innocent bystander.” Derrick and Frankie head in to the supply room to celebrate that they just completed their second Team America mission.

It’s time for the Battle of the Block competition, the houseguests head outside and find cannon, boats, and a lifesize chess board. The four nominees have to move across the chess board like a knight does in the game, by taking two steps at a time and then on (forming an “L” shape), and once they stop on a square it is out of play. The first player to make it to the end of the board will win the competition. Jocasta, Amber, Brittany, and Victoria are all basically clueless when it comes to chess, and it is showing. Jocasta traps herself and has no more moves, and is eliminated from the competition. Brittany traps herself, and has no more moves, it is down to Victoria and Amber.

After an intense Battle of the Block game, Amber and Jocasta win and Frankie is dethroned again. Victoria and Brittany are still up for eviction, and Cody is the reigning HOH.