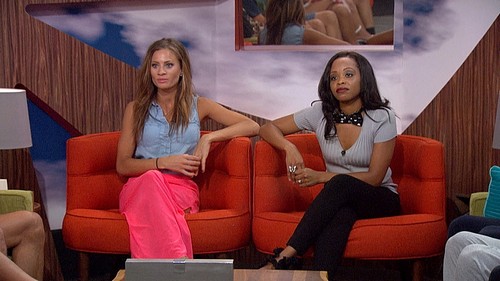 Tonight on CBS BIG BROTHER returns for tall new episode in their 16th season. On tonight’s episode a house guest is evicted and there is a new head of household competition.

Last night, the Veto competition was held and it is a western theme; Hayden was the winner. During the Veto meeting, Hayden gave both nominees a chance to save themselves. Jacosta first praised God, really!!!! then told Hayden to use it on her. Victoria said that she is a true competitor and hoped he used it on her. Hayden wished he had two Vetos but he only had one, he used it on Victoria. Zach calls Amber out on the way she has been treating Caleb, but she doesn’t have a reaction and the meeting is over. Did you watch the last episode? If you missed it we have a full and detailed recap, right here for you.

On tonight’s show we’ll be finding out who will be evicted from the Big Brother House, along with it we’ll be seeing the contestants go head to head to compete to become the head of house holds.  If you want to find out what is going to go down tonight before the show, check our nifty spoilers.

RECAP: Jocasta has been on the block before and she is worried. Amber goes to see Frankie, he says he is sorry and Amber says she is so mad at Zach. Amber tells Frankie that she was put up for personal reasons. Frankie tells her that it all has to do with Caleb, he is responsible for her being on the block.

Amber goes to see Caleb and tries to talk to him, she tells him it is a slap in the face and he tells her it is her fault because she stopped hanging out with her alliance. Caleb is having second thoughts, he doesn’t want her to go. Caleb tells Amber that he is sorry 100%, he wanted to keep his word with her, but the alliance wanted to put her up. Caleb then goes to see Frankie and tells him that Amber didn’t deserve to go up and he feels like such a slime ball. Frankie on the other hand loves that Caleb is taking responsibility for Amber being on the block and wants to leave it that way. Frankie tells Caleb that the reason she went on the block is because Amber hurt him. Caleb says that the more he talks to Amber, the more he knows they made a mistake and if they make her go, he won’t be in the alliance any more, he will play by himself. Amber is in the HOH room and is asked if she likes Caleb, she starts to cry and leaves. Amber confides in Christine that she doesn’t like Caleb romantically and it is really hurting her game.

Caleb tells Zach, Derrick, Frankie and Cody that they should keep Amber, he trust her as much as he trusts them. Frankie tells Caleb that Amber is going around the house telling everyone that he is her target. Caleb is pissed and leaves the room, Zach thinks the house is going to blow up.

It’s time for the next Team America mission and Derrick gets to read it, America wants them to vote against the majority in the house and then blame two players that they voted against the majority. Donny is worried, he doesn’t have the character to do this and thinks it will ruin his game. Donny wants to decline the challenge. Frankie doesn’t think it is tough mission to pull off, he thinks it is a tough mission to survive.

Time for the live voting to begin, but first they have a final chance to sway the vote with a statement. Amber sends love to her family and says Jocasta is amazing, she loves everyone in the house, has played an honest and loyal game, it would benefit everyone’s game if she stayed. Jocasta acknowledges God first (sigh), she is trustworthy and loyal, prays for everyone every night.

Caleb looks devastated but acts cool and says that is what happens when you bite the hand that feeds you. Amber says she blames Caleb more, she knows it was personal, but she is not going to pretend to be into him just to win a game. Amber tells Julie that she wants her bunny slippers back from Caleb. Julie asks her about her relationship with Cody, Amber tells her that he was like a brother to her. Julie asks who is running the house, Amber says Donny.

Time for the HOH competition, the house guests got to see videos of past Big Brother competitions earlier in the day and now they are going to be asked questions to test their memory. Jocasta is the first person out, then Christine and Derrick. There are six left, Cody is out, it is a five way tie; Zach, Nicole, Caleb, Donny and Hayden.